Wikipedia says that there are about 22 beaches in Sri Lanka. While we were planning our trip, we had hard times choosing the ones we would like to visit or to stay at longer. The reason for that is that the beaches in Sri Lanka are beautiful and attractive in different ways. In total, we’ve been to five beaches in Sri Lanka: Mount Lavinia, Mirissa, Tangalle, Trincomalee and Nilaveli. Before we chose our beaches, we read a lot of reviews and comparisons between the best beaches and they were very helpful. Now it’s my turn to write one based on our own hands-on experience. I hope this review will be helpful for you. 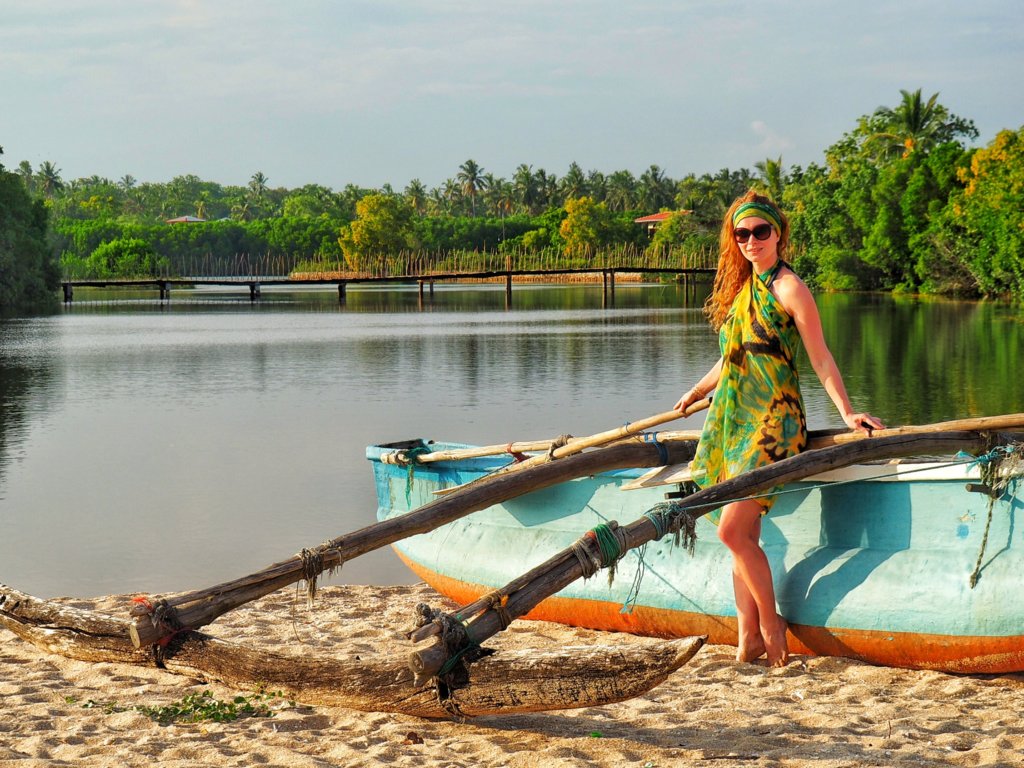 First on our route was Mirissa. We took a tuk-tuk there from Galle for 1300-1500 rupees for 1-hour ride. On our way we made a short stop at the (fake) stilt fishermen spot. You definitely know how they look like – one stilt fishermen photo even made it to the Lonely Planet cover. Probably somewhere else in Sri Lanka the anglers indeed fish like this, but on that spot they would charge you 1000 rupees for three fishermen to climb up the sticks and pretend they were fishing! What a disappointment! It looks attractive anyway though! Those men have found out that they can make a better living posing for the cameras than by fishing and we cannot blame them for that. We had luck as while we were there a minibus with tourists arrive who paid this amount of money. In these conditions, as the anglers were already in the water, we agreed to pay only 200 rupees for a photo. By the way, you can google a bigger anglers spot by entering “Stilt Fishermen Photo Spot” in the search field. 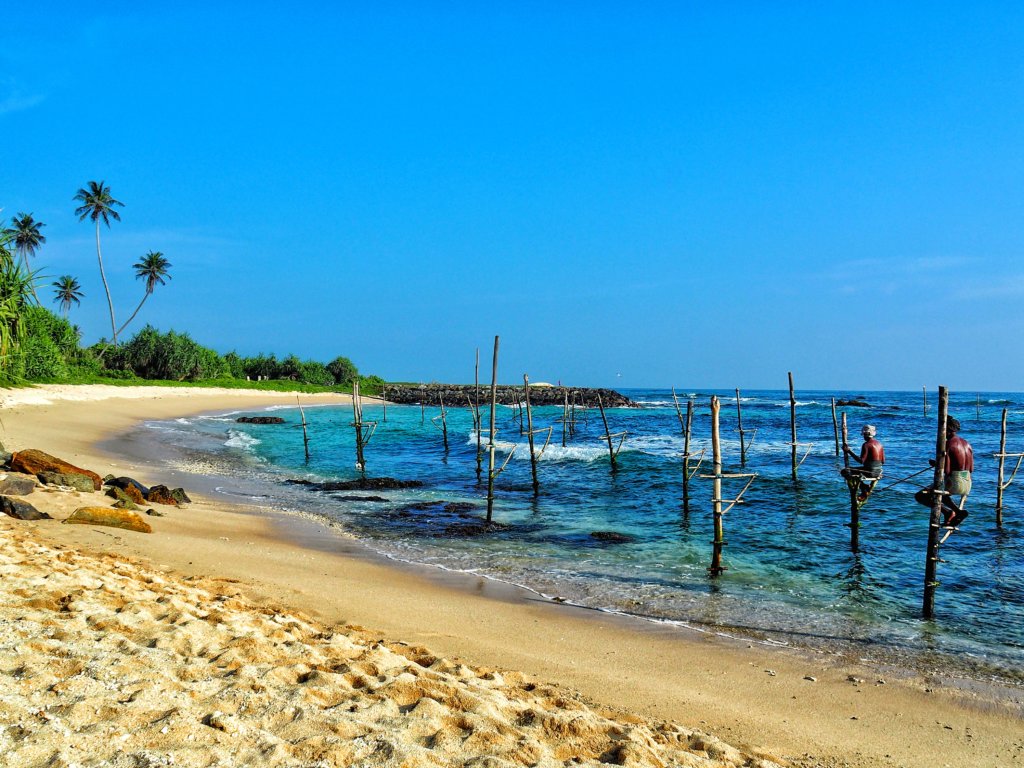 Mirissa beach is very lively both during the day and in the evening: many families and young people enjoying the sun and the warm ocean during the day and countless restaurants directly at the beach at night. For the dinner, you definitely have to head to the water, take a long stroll until the beach end and check the catch of the day presented at the open stands. We have eaten delicious barracuda at the Wadiya restaurant. I’m puzzled why this place has only 2,8 stars on Google – we were completely satisfied with our choice and the service. 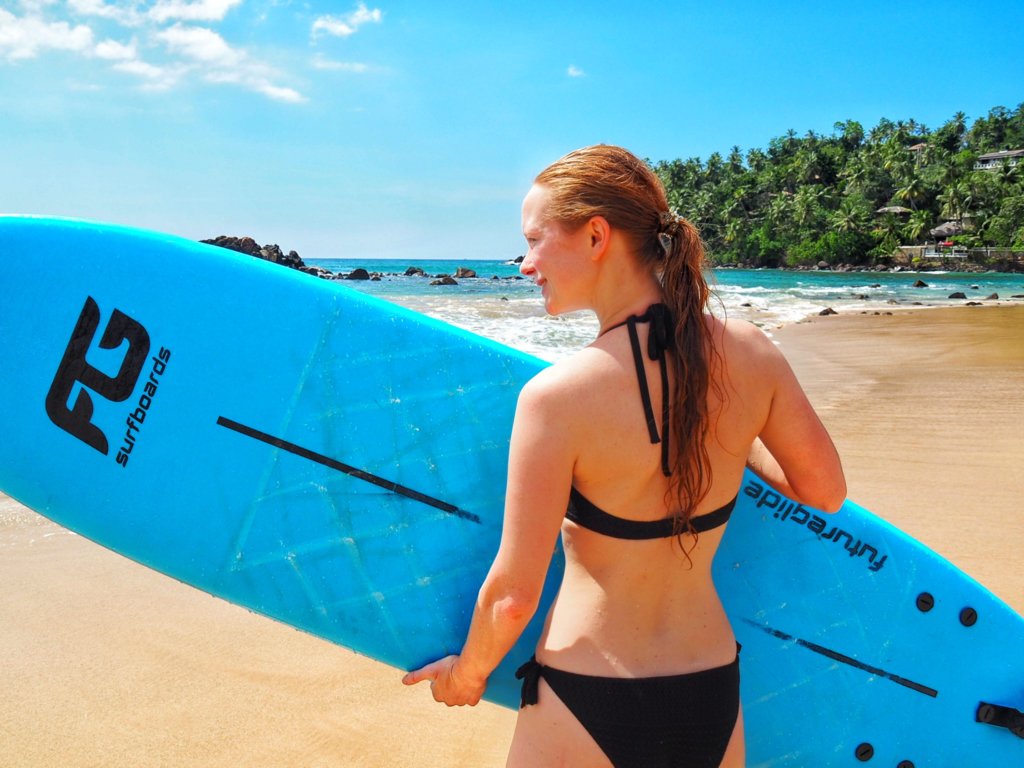 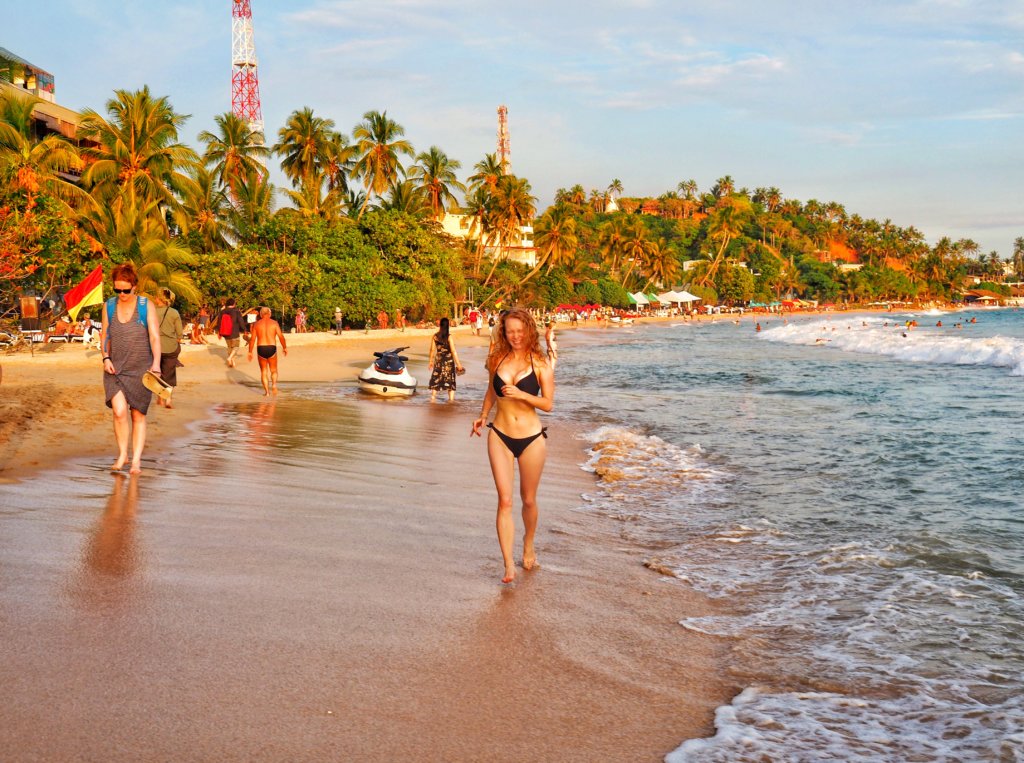 In good weather, you can surf at Mirissa beach. A surfboard could be rented for 500 rupees an hour. Unfortunately, the day we were there the waves were not “surfable”. I tried really hard, but there were no long-lasting waves with sufficient energy. In fact, they got the energy way too close to the beach where children were swimming and broke very quickly. So this one is the best photo we could take. Let’s say, I’m pretending to make a handstand on the board! By the way, I got a silly sunburn from lengthy lying on the surfboard while waiting for the waves. After 40 minutes, we gave up and returned the surfboard after a short photo session. 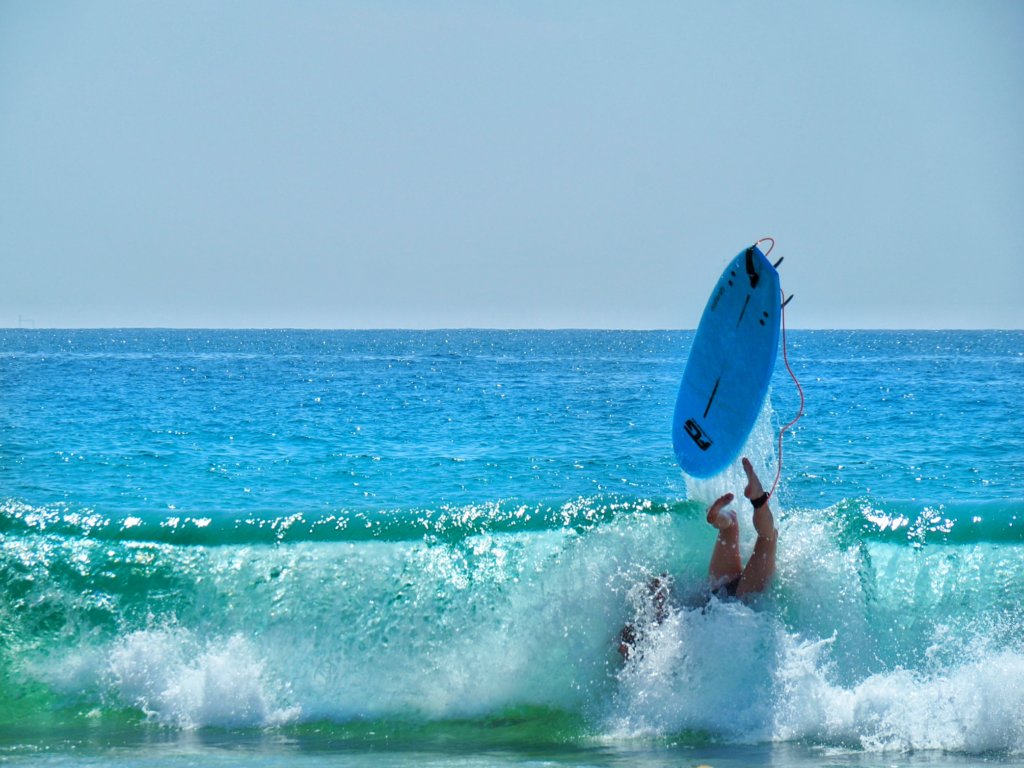 For good and stable surfing, it was recommended to us to go to Weligama, right next to Mirissa, or to Arugam Bay on the East coast. 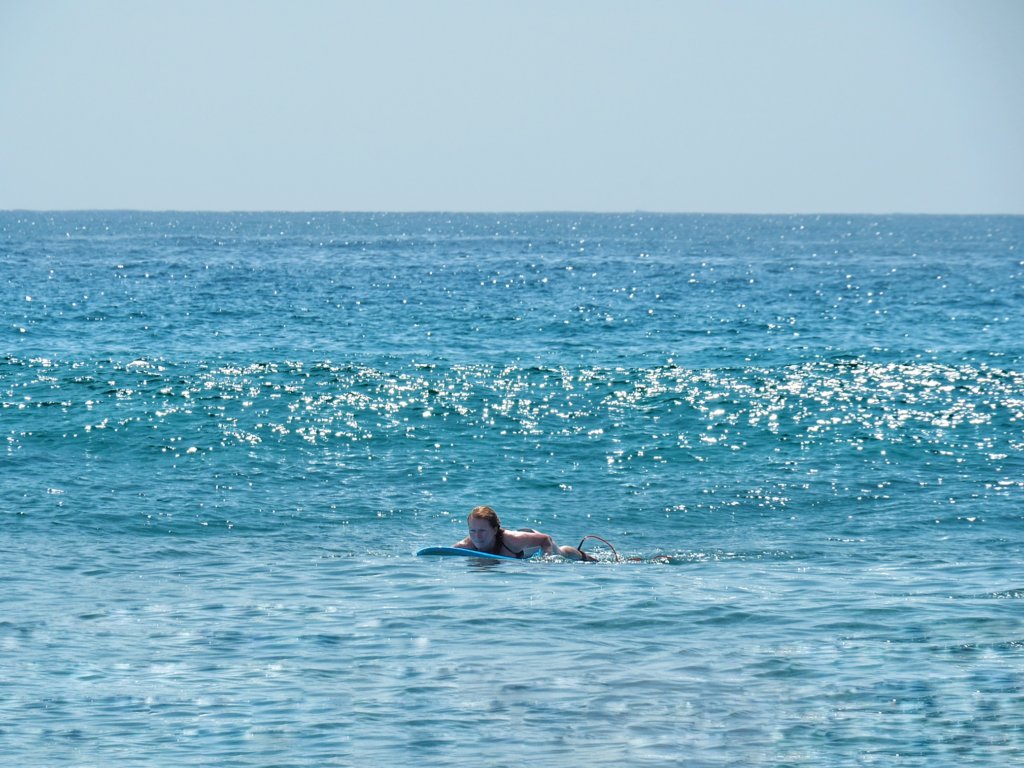 From Mirissa, we took a bus to Matara for 100 rupees per person and consequently the one for 67 rupees to Tangalle. The bus ride took about 2h in total. It was partly very demanding, as we had to wait about 20-30 minutes standing in a very hot bus before we started moving again. However, there was a very good entertainment system in that bus – light music, loud Indian music and a huge plasm TV with running documentary about elephants smashing motorbikes in national parks. For your information, many people get off in Beliatta – there it is realistic to get a seat (for the last 10 minutes of the drive, lol). 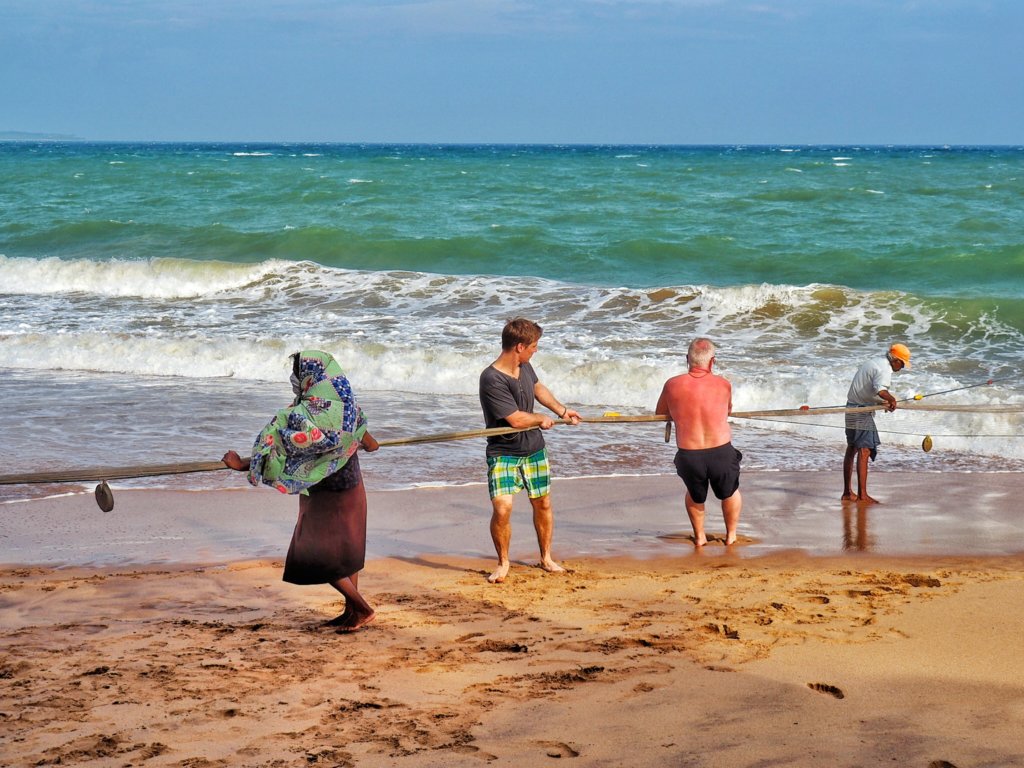 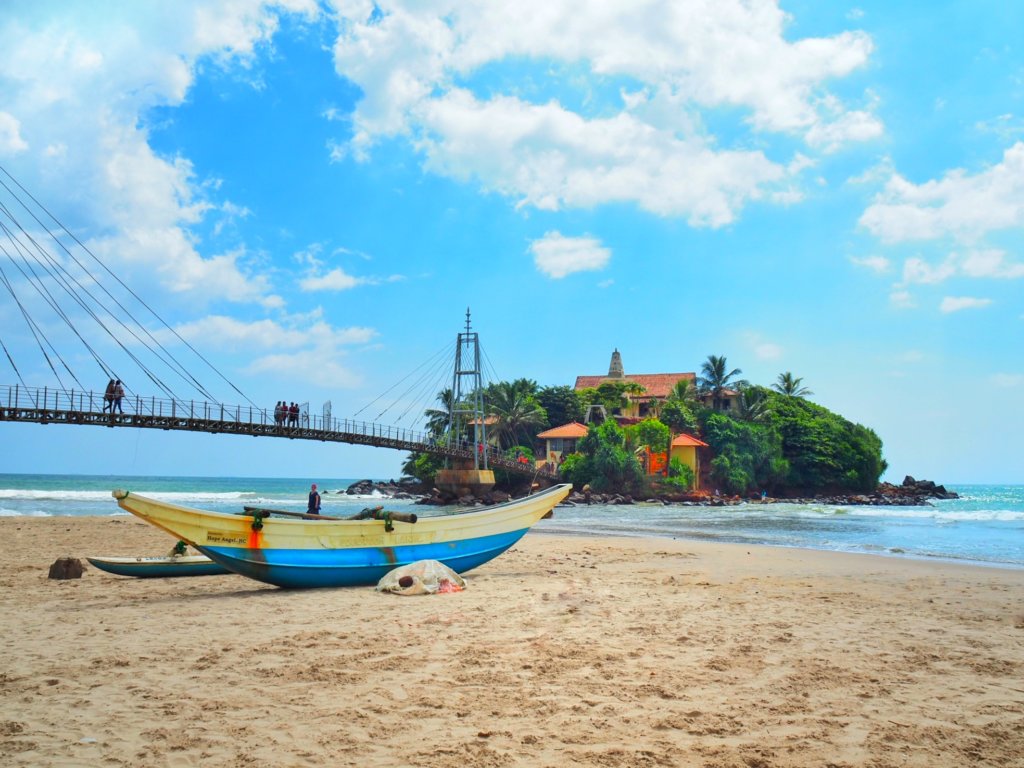 Already on the first day in Tangalle we had an unusual experience: helping the local fishermen to draw the net full of fish from the ocean. It was very curious that almost every tourist passing by stopped and helped to pull at least for some minutes. Okey, okey, the fishermen were also very demanding in their invitation to help. At the end, we got so involved into the process that the meal we ordered at the nearby Frangipani cafe cooled down. 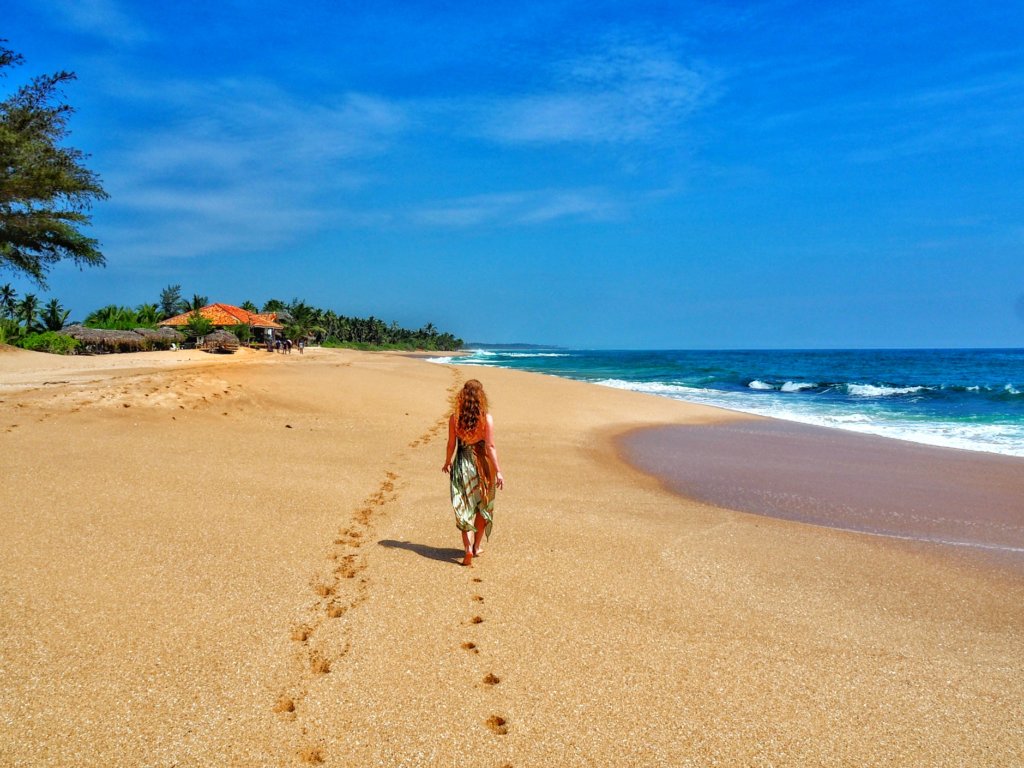 Tangalle beach is beautiful. Without doubt, this was the most dazzling beach on our Sri Lanka trip! If you go to the east, the beach becomes more and more secluded. Unfortunately, the weather changed the day we arrived in Tangalle and it was not possible to swim – the waves were too high. However, jumping and fighting against them was also fun! I realized quite quickly that I didn’t have enough skills how to cope with the huge waves and regress current – there are always things to learn… 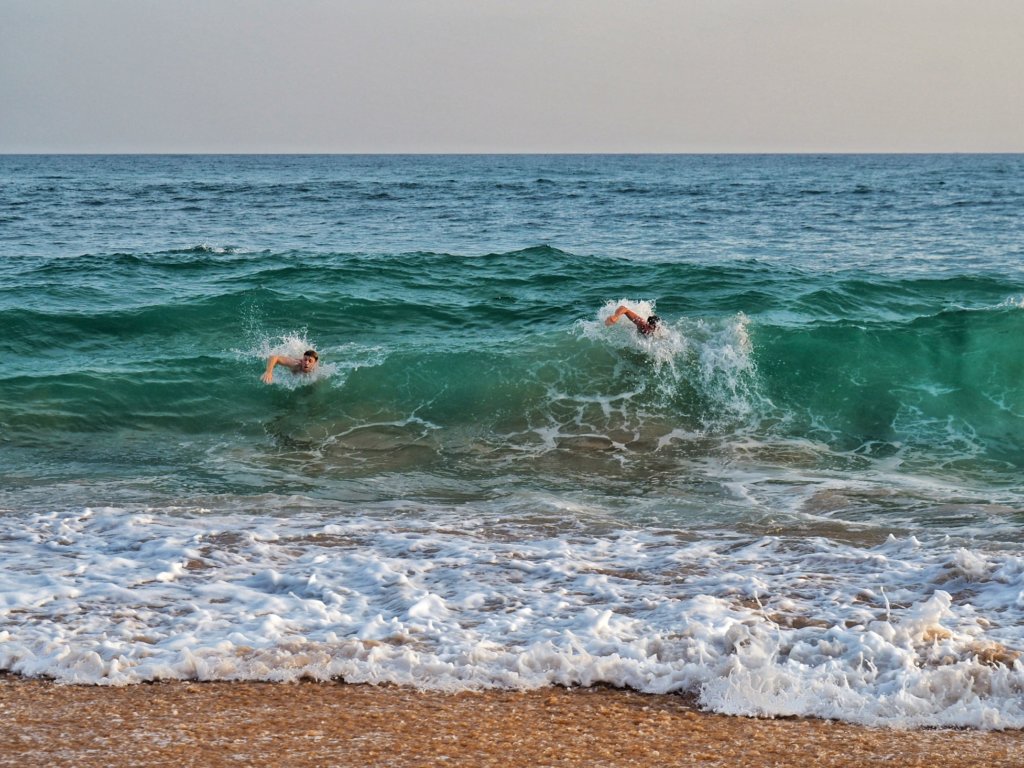 Accommodation in Tangalle is available in abundance and if you book well in advance, you can find very good deals. Even if you book spontaneously, the price for a double room with an A/C and breakfast will be around 30-40$ for a night. Our advice would be to book something at the Eastern end of the Tangalle beach – the beaches there are less populated and you have the ocean exclusively for you. We spent one night at the 360 and enjoyed relaxed atmosphere in its restaurant on the beach. 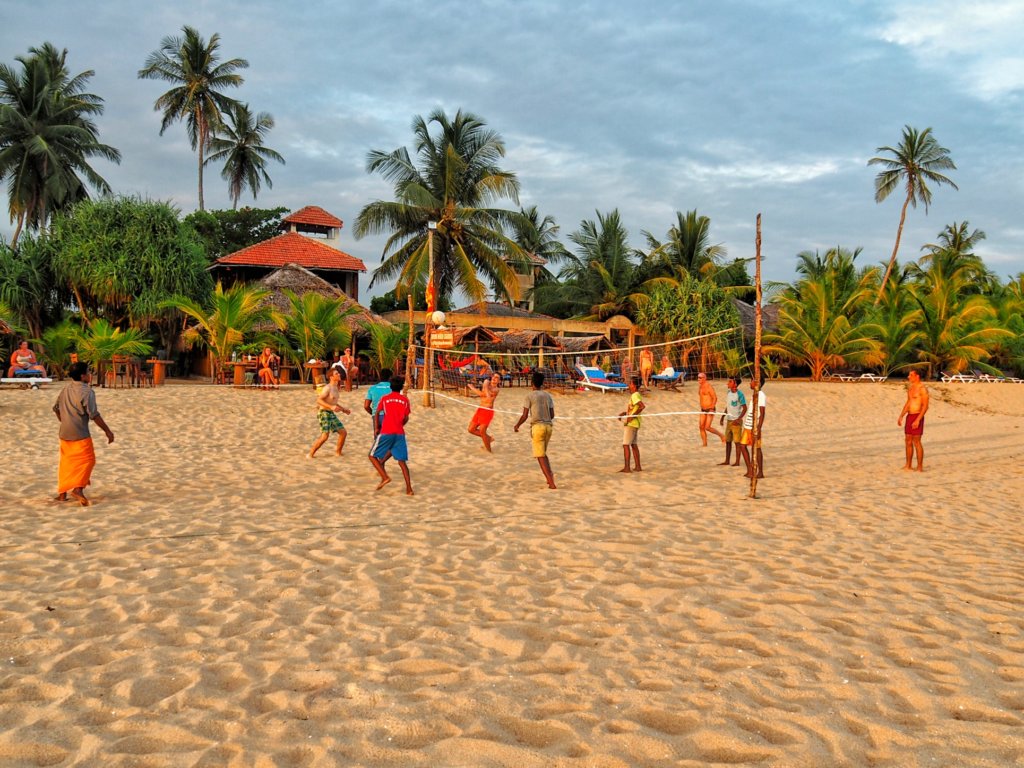 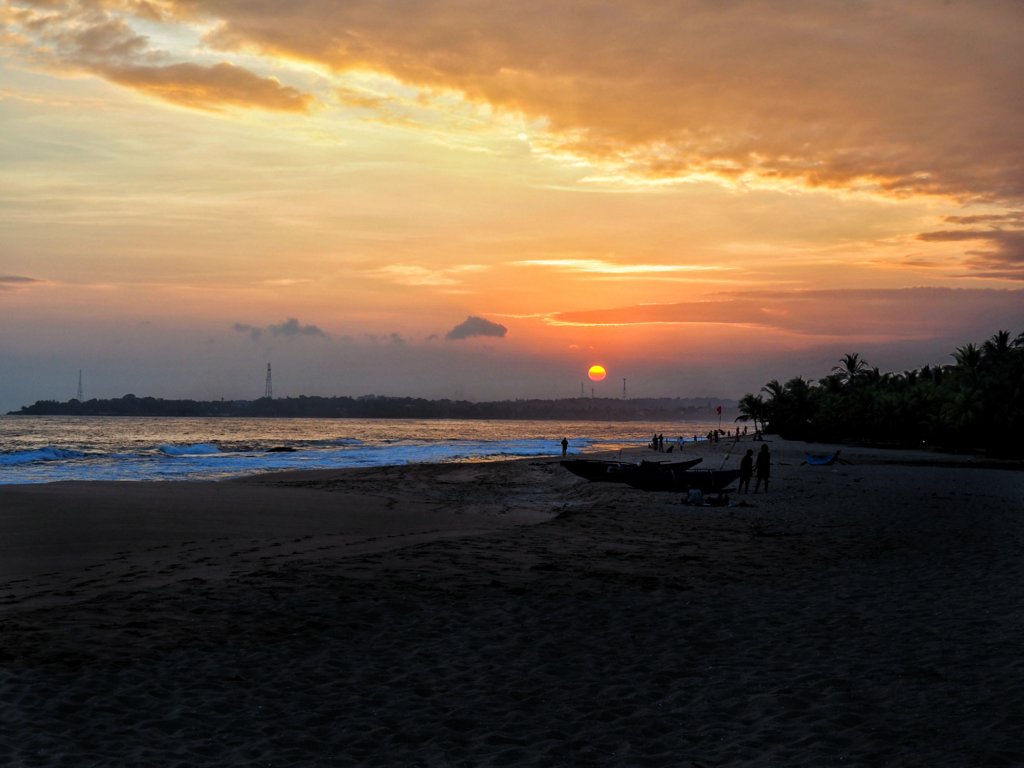 By the way, you can buy necessary grocery in a shop next to the Guyana hotel, which is open from 7 am till 12 pm.

The best meal in Tangalle was at the Mangove Chalet restaurant: we were lucky and more than happy to enjoy the special offer of the day, lobster (in fact, four of them), for only 2200 rupees. 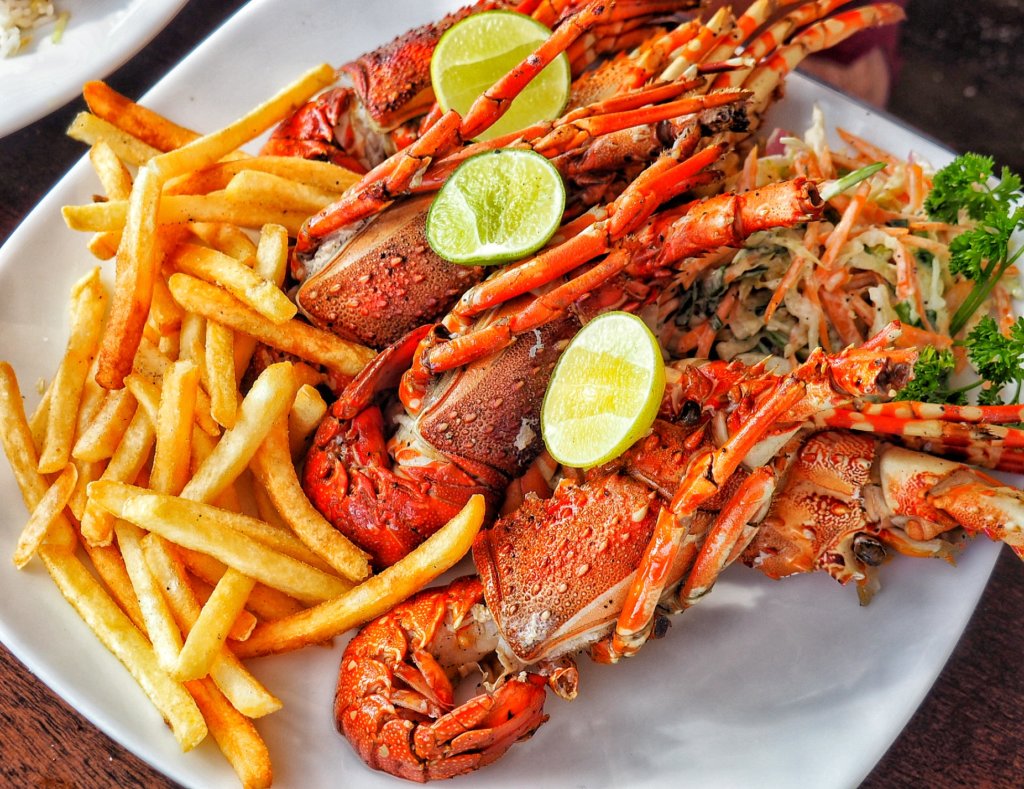 The last three days during this trip in Sri Lanka we spent in a hotel at the Nilaveli beach. This was actually relax pure: we slept a lot, lied down at the beach, walked around, ate tasty food. We were there during the off-season; therefore, the beach was absolutely deserted… and slightly dirty. Many hotels were empty and there was no staff to clean up the beach from the rubbish brought to the seashore by the tide. We even have seen some giant puffer fish, but it was quickly dragged away by a wild dog. Nevertheless, we could imagine that the Nilaveli beach would be much more beautiful during the high season! 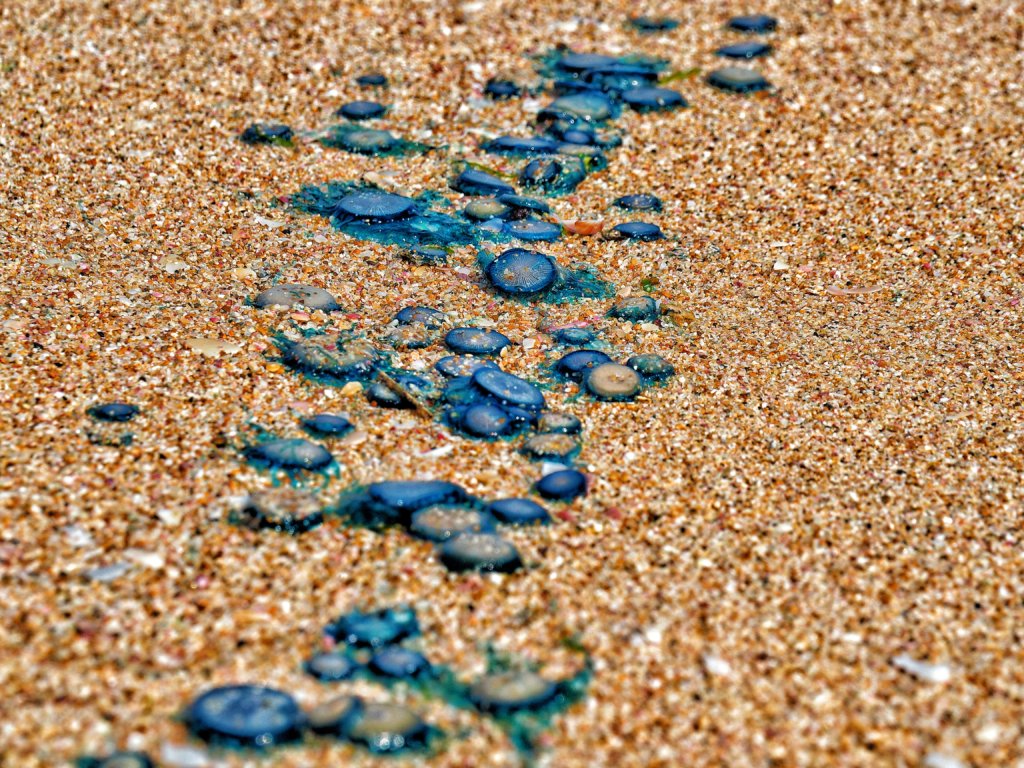 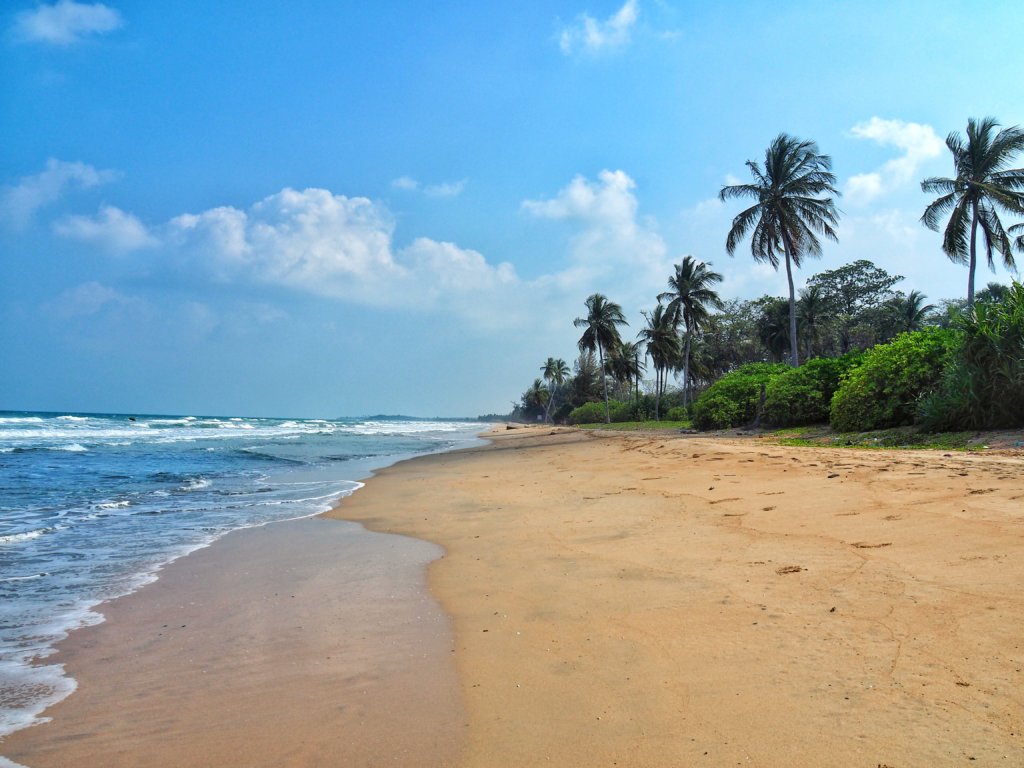 The restaurants at the Nilaveli beach, which we can recommend to you, are Leo’s Café (perfect for a breakfast), That’s Why (original cocktails and tasty fish) and Home Food Center (cheap and tasty homemade food).

One day we went to Trincomalee with a tuk-tuk (600 rupees one way). On our way through the city we dropped by a local beach. Probably, this was a typical fishermen haven – many boats were resting in the sand. 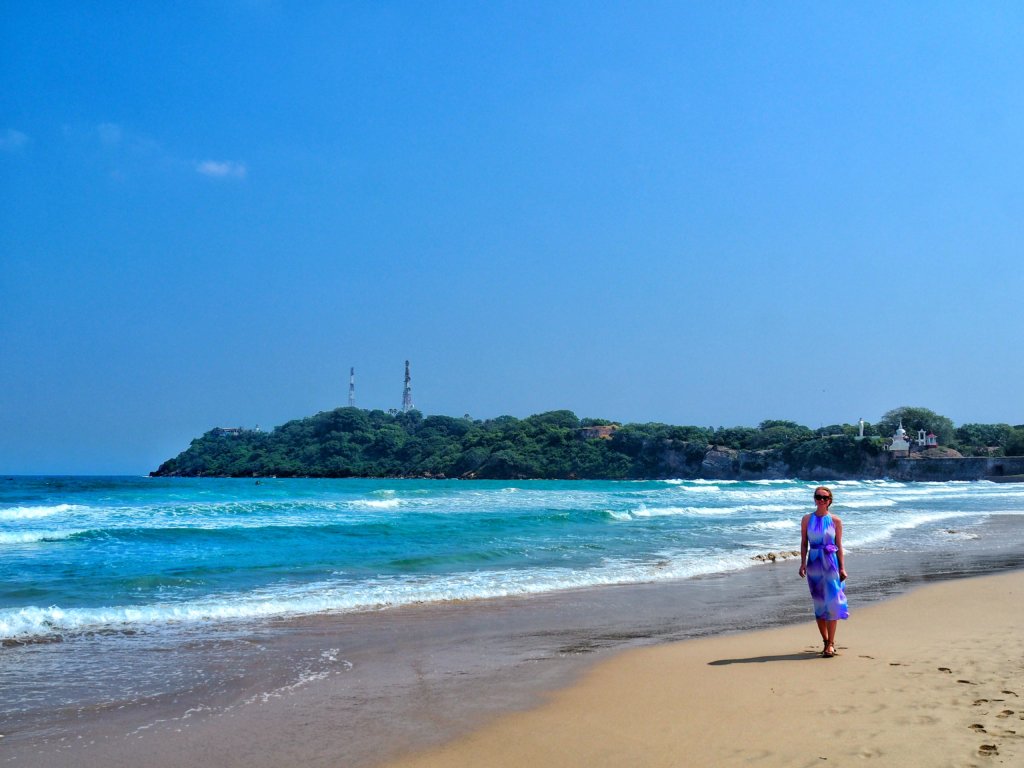 Actually, Trincomalee was our last stop before we returned to Germany. The buses between Trincomalee and Colombo run frequently, but the A/C bus goes only twice a day, at 2 pm and 11 pm and costs 650 rupees. You can book the night bus in the internet for 980 rupees per person. Unfortunately, for the 2 pm bus the reservation in advance is not possible: usually you book the same day. However, my stubborn boyfriend found a workaround and persuaded a ticket office worker to give us his mobile phone number so we could call him the morning of departure day and reserve the seats. It worked out, so the 7h bus ride was accomplished in a comfortable cooled minivan. 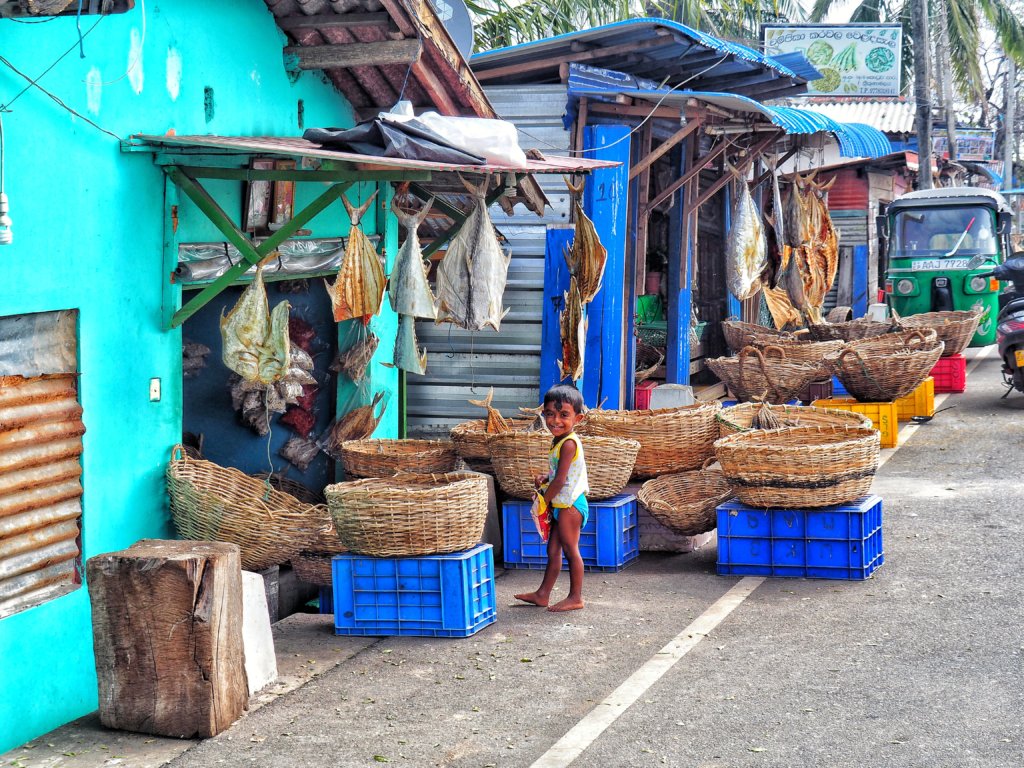 Coming back to the beaches comparison, I would rank the Tangalle beach number one on our list. Additionally, if I was given a second chance to travel through Sri Lanka, I would stay longer in the Mirissa – Tangalle area and also visit the Unawatuna and Weligama beaches.