Previous Next
A spontaneous weekend-trip to Venice and Bologna

The power of words and thoughts is often underestimated. One week before, when we were in Colmar, I recklessly compared Colmar to Venice thus provoking a small discussion with a couple of friends if Venice better indeed and when is the best time to go there.

On the road in Venice

To my great surprise, three days after this conversation my boyfriend suggested to go to… Venice. Yay! I got a real opportunity to compare these two cities in a short time slot! As a result, I can tell you, these cities are simply incomparable. Both are gorgeous, but absolutely different. Hard to say, what city I loved more. Probably, because of the size, Venice has significantly more to suggest. I was deluding myself thinking of Venice as of a small town. In fact, it is huge. It is easy to go astray in the twisted net of narrow streets and channels and dead-ends…

What is most remarkable is that there are no cars at all. The car area ends on the very beginning of the island, on the St. Mark’s square before the Santa Lucia central railway station (there are several parkings as well). So if you are late for your train and find yourself of the opposite side of the island, you have to literally run. You cannot take a taxi, this is the fact. Water taxi – maybe, however, first, the channels are sometimes extremely narrow and it is difficult to turn or to overtake other boats; second, prices for water transport are very high. My advice: keep track of your time strictly and leave at least one hour in reserve to reach the train station/ the cars. Window-shopping and buying a drink to-go are not included into this one hour time slot. This is purely walking.

For shopping you have to plan much more time. It’s worth it! For example, in Venice you will witness the crazy choice of genuine Italian leather bags and purses (e.g. Vera Pelle) for very reasonable prices. Beautiful Murano glass craftworks, colorful Venetian masks of all types and sizes: this is the heaven of a souvenir shopper.

Getting to and from Venice, especially if you arrive at night, is not so easy (easy it is, but not so cheap, I can hardly imagine how the low-cost travelers manage it at all). A taxi costs over 50 € and brings you only to the St. Mark’s square, the rest of the journey you have to make by foot. Imagine, you have a heavy luggage and hundreds of bridges ahead of you (if you leave more or less centrally). The shuttle buses (No. 5 and 35) from the airport are also an option: the ticket costs about 8 € one way and the last bus departs from the airport around 1:20 at night (the timetable can be found here: http://actv.avmspa.it/en). Besides, you can take a water bus (Linea Blu) too: it goes from the airport to Venice and the main Venetian islands (Murano, Burano, Lido) and costs about 15 € to Venice/ Lido. The last water bus departs at 00:40 and it takes about 1,5 hours to reach Venice. The timetable and detailed information to be found here: http://www.alilaguna.it/.

We lived in a place called Camping Village Jolly situated in Marghera (actually, a very fine place for those who wants to live close to Venice without paying a lot of money: easy-to-reach by car/taxi from the airport (40 €), many young people, party every day, Jacuzzi, swimming pool and a small bungalow for living). To go to Venice you either take an organized shuttle (2,5 € p/p) or take a local bus No.6 (1,5 € p/p, the ticket shall be bought in the tobacco shop close to the bus stop). We had troubles finding the bus stop and had to ask many times people on the streets. From this situation we drove a conclusion that the Italians often speak no English.

Veneto region stretches across 117 small islands that are separated by 150 canals and linked by 378 bridges. We had a feeling that during one day in Venice we walked over at least the half of the bridges. Probably, the most famous bridge is Ponte Rialto. Unfortunately, when we were there it was closed for a restauration. Due to the lack of time we have been only on one island, in Venice. Next trip to this region will definitely include Burano, Murano and Lido.

When strolling along the Grand Canal direction Rialto Bridge, next to it you will find a city market (called Rialto as well). Good variety of fish and vegetables, fruit and herbs. The prices are, however, quite high.

From the area of dispelled stereotypes: 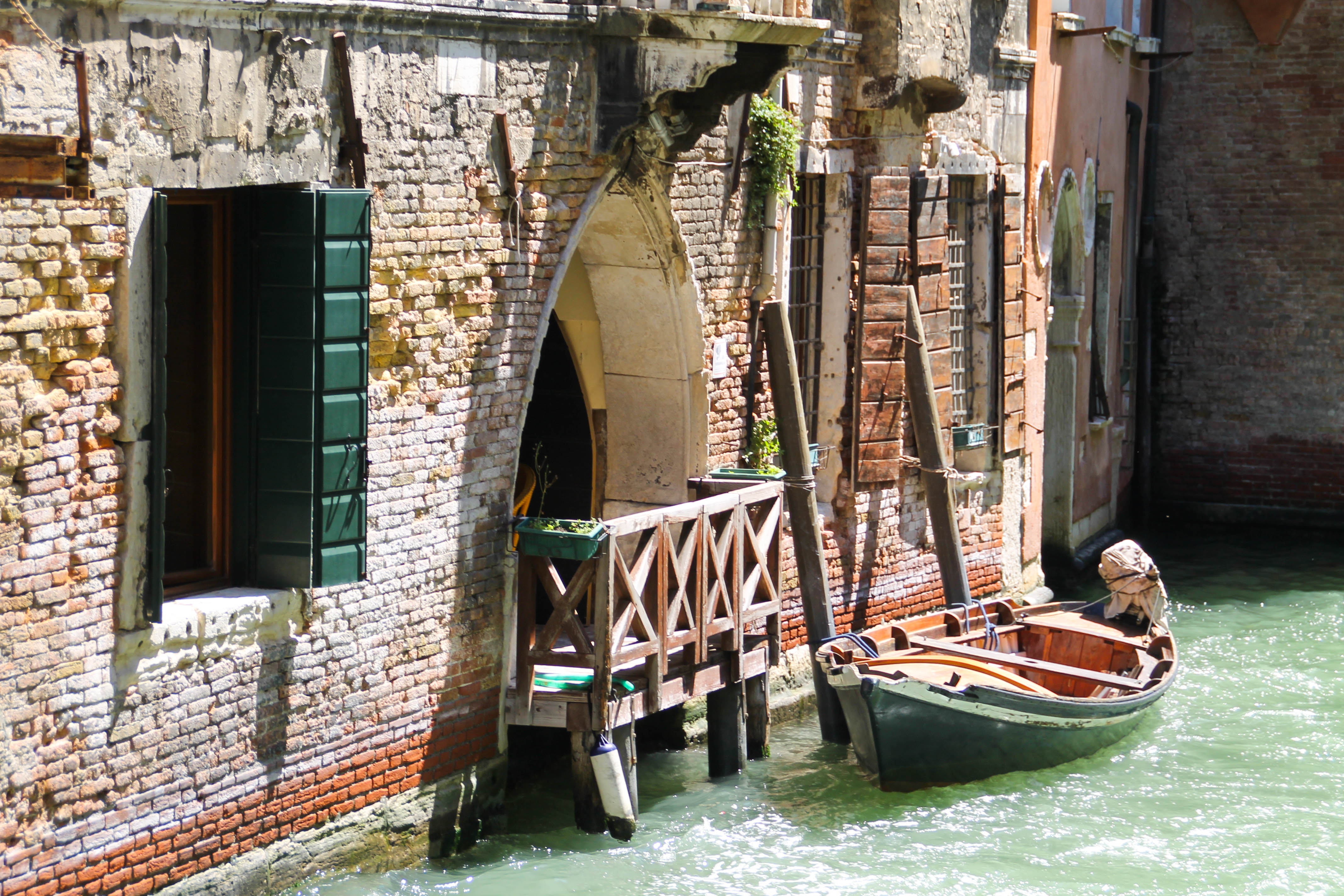 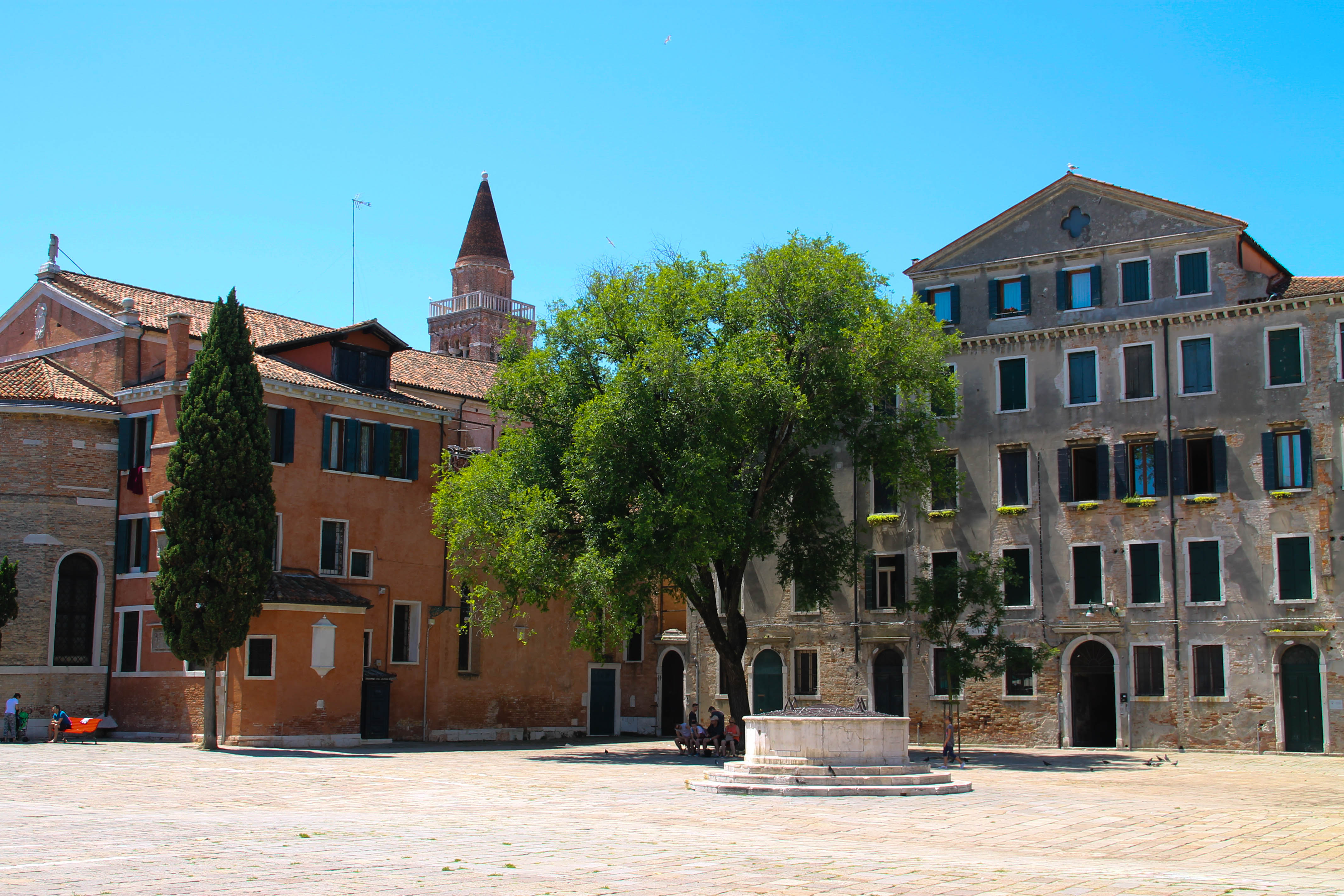 Deserted square in the middle of a day without tourists

San Marco is the central (and probably the most crowded) square in Venice. The Basilica di San Marco is gorgeous, one of the most beautiful buildings I’ve ever seen… We have heard that Campanile di San Marco situated on this square is called the best view point in Venice (the tower is 99m high). However, we decided to skip it because of a huge line and obvious hours of waiting in the heat. 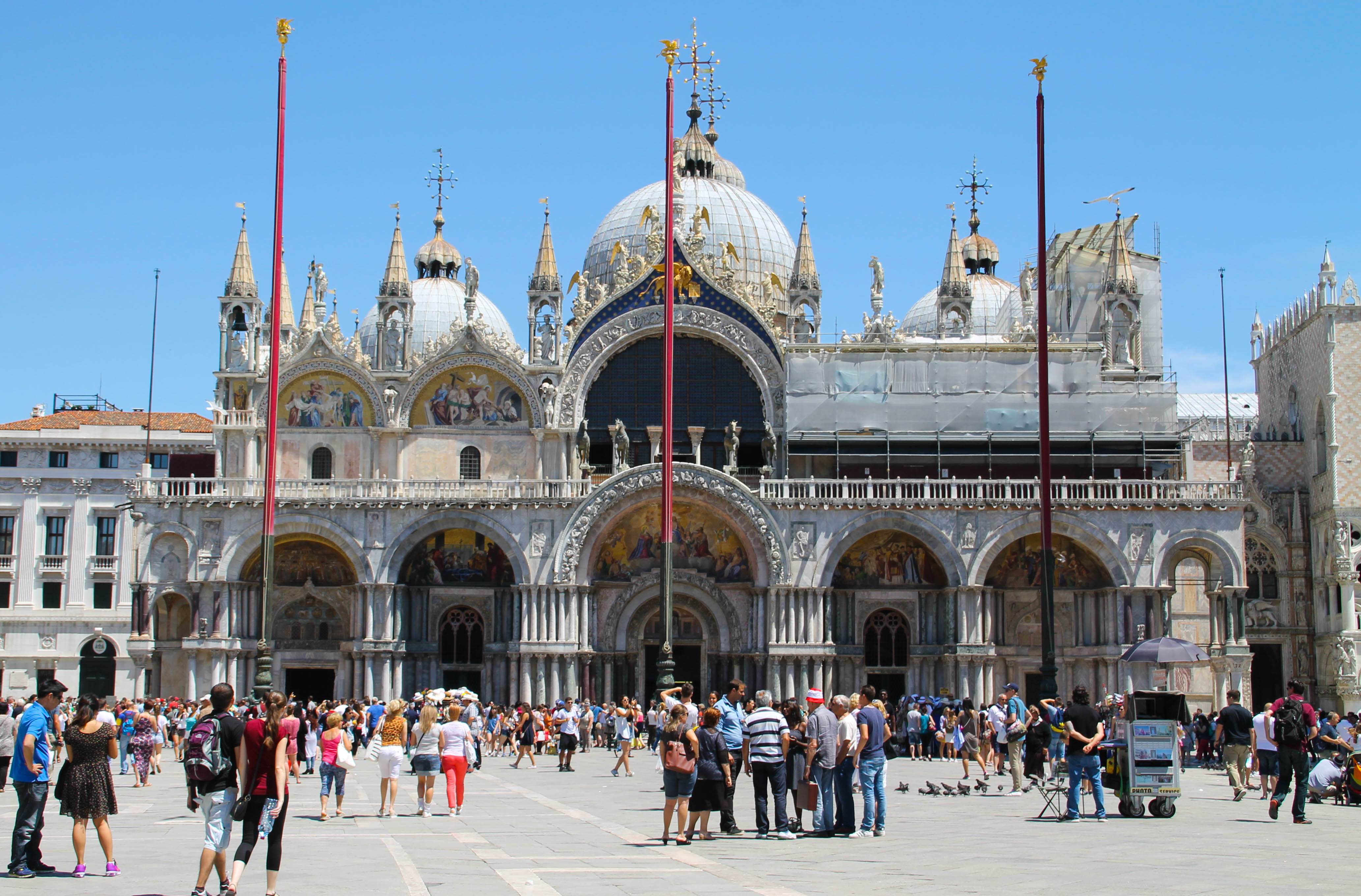 One place that I really wanted to visit but we didn’t have enough time on the way back is the Libreria Acqua Alta – a second-hand bookshop.

What shall you drink in Italy? Of course, wine or sparkling wine. Aperitivi and ombra, procecco and raboso, Aperol Spritz and Verduzzo – all this you will find in abundance inside the countless bars, bistros and restaurants on the streets and squares of Venice. I think, with eating you do not need an advice: Italy knows what to suggest, and the offer is much broader than pizza and pasta.

Bologna this time was all about eating and partying and only a little bit about sightseeing. It is a student city, in the evening the city center is buzzing and flourishing. Hundreds of cafes, bars and restaurants are full of young people, tourists and students. Life in this city starts after 9 pm.

For delightful, creamy and very naturally tasting ice-cream drop by in Gelatti Gianni – there are many shops all around the city, one of them is situated next to the Torre Asinelli and Torre Garisenda, the twin towers. My absolute favorite flavor was, and I stayed faithful to myself, is pistachio. These twin sisters are actually not twins at all; one tower is twice higher than another. The Towers of Bologna are one of the landmarks of the city and were built in 12th century. One of the towers, Garisenda, is leaning: the restauration works are ongoing to keep it in balance.

We had only two hours left before our departure, so we visited two most impressive and beautiful squares, Piazza Maggiore and Piazza Santo Stefano and had lunch.

Here, in Bologna I tried the best lasagna in my life (tortellini and Bolognese were also delicious, but Lasagna – just divine! So, for a great lasagna you should definitely head to the restaurant “Il Portico” (http://pizzeria-ilportico.com/).

By the way, next to this restaurant, only five meters away La piccola Venetia is situated, a hidden channel which you can see through a small window 50×50 cm. 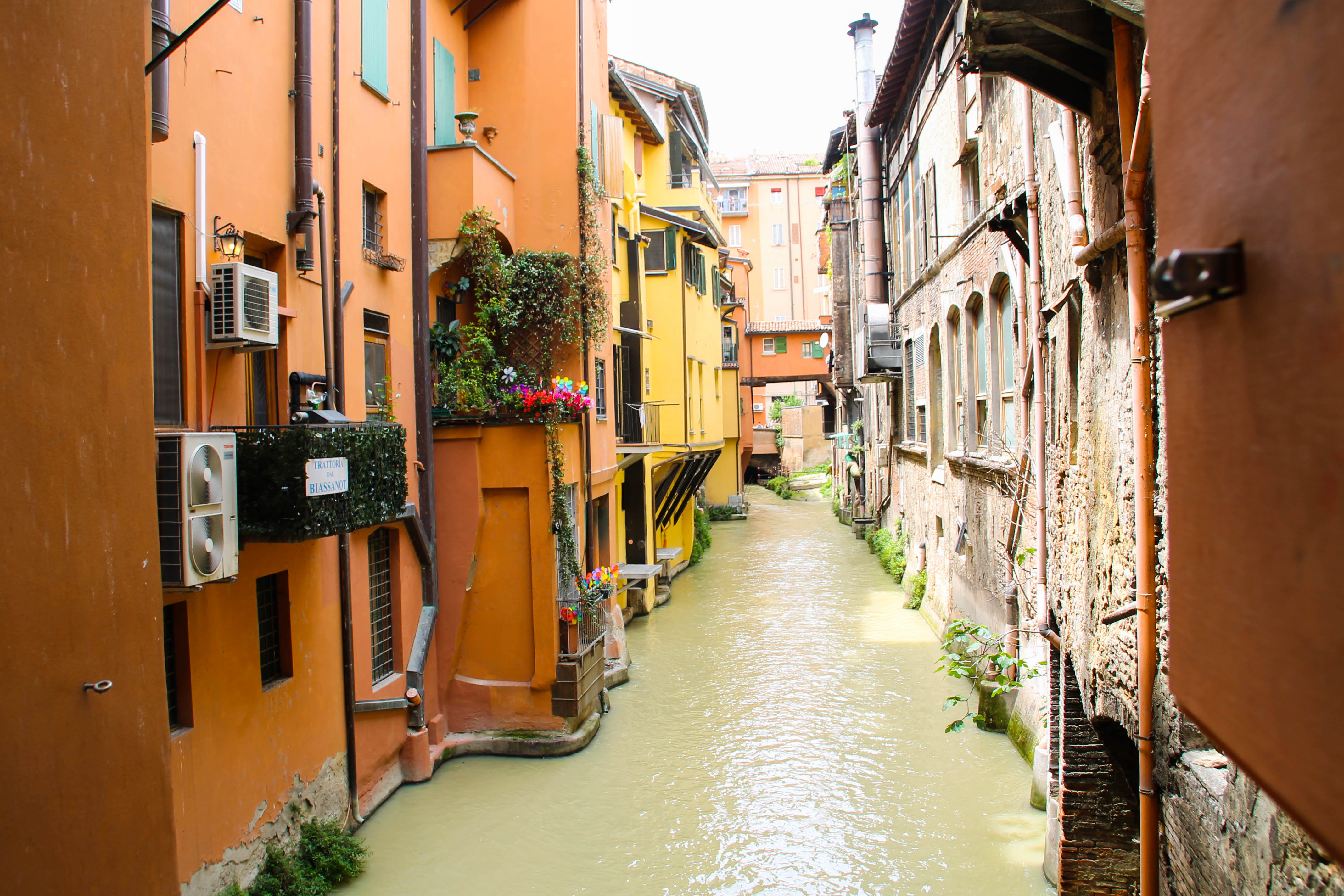 Going to the airport from Bologna is easy: the bus starts from the central train station every ten minutes, a single trip costs 6 €, the travel time is about 20 minutes (here you can buy the tickets in advance: http://www.tper.it/content/linea-aerobus-aeroporto-stazione-centrale). The shuttle bus goes daily from 5:30 till 0:00. Otherwise you have to take a taxi.

I think, we will dedicate Bologna more time and discover its hidden secrets – I’ve heard there are al least 10. One we have seen, nine are waiting undiscovered. Bologna, we are coming soon!