Previous Next
Georgia: finding a place to sleep and choosing things to do. 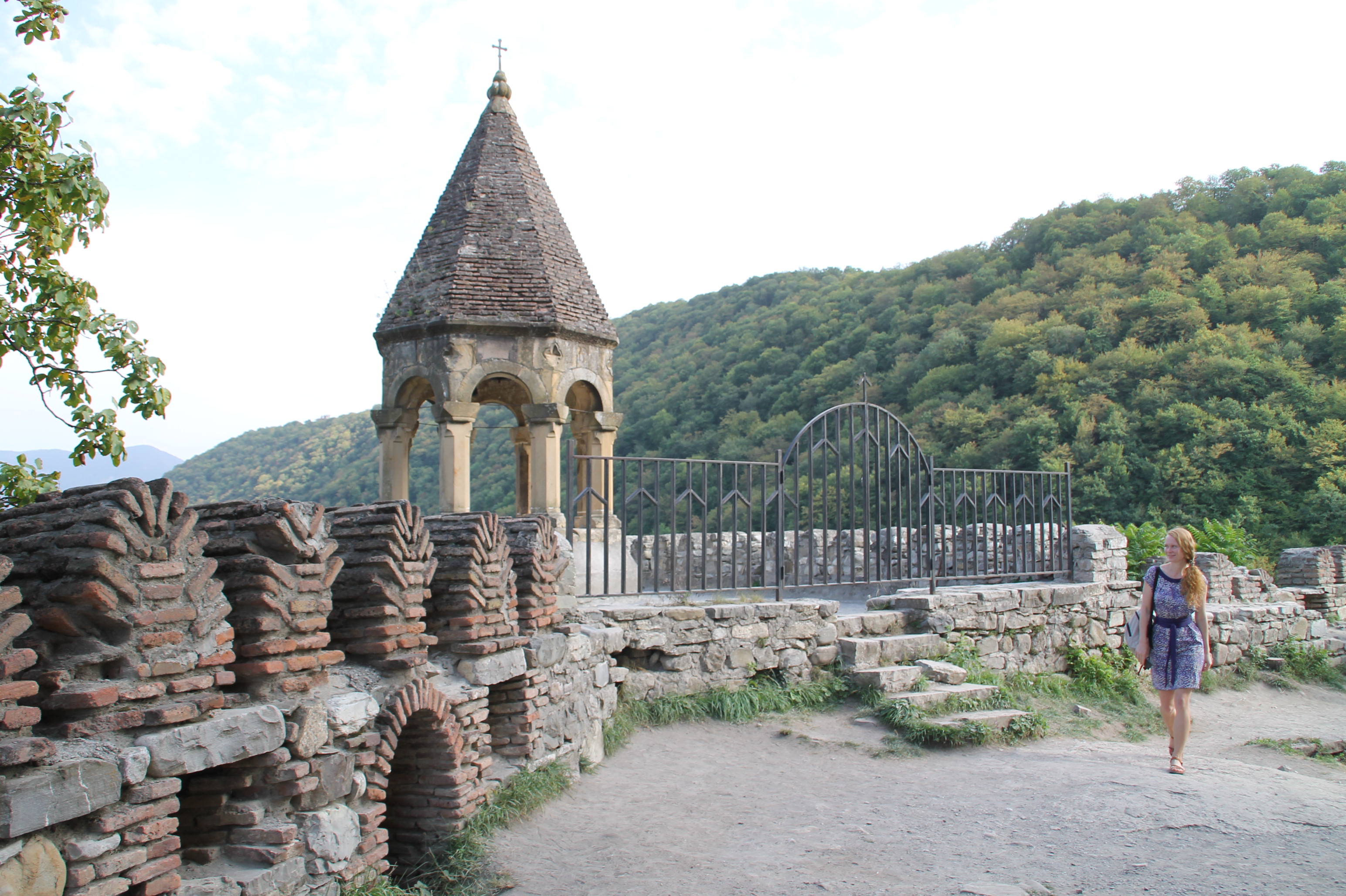 …continuing (and concluding) the Georgian post series I want to share our experience in finding an accommodation and choosing places to go and to do.

Already on our first night in Kutaisi we realized that pre-booked hotels are not always reliable. After arrival late at night we first headed to the hotel of our Italian co-traveler but it was closed, no sign, no lights and no one answered the phone. We took him with us to our hotel – the same story, though we checked ahead the trip that the reception was open 24-hours. Our taxi-driver offered a guest house of his friend, made a short call and brought us there: 25 Lari a single room, 40 Lari – double room. This was a family house run by two ladies speaking Georgian and Russian. Most probably, many things in Georgia are based on trust. We draw this conclusion when we returned to pick up our stuff from there, the house was open, and so was the cellar with our suitcases. 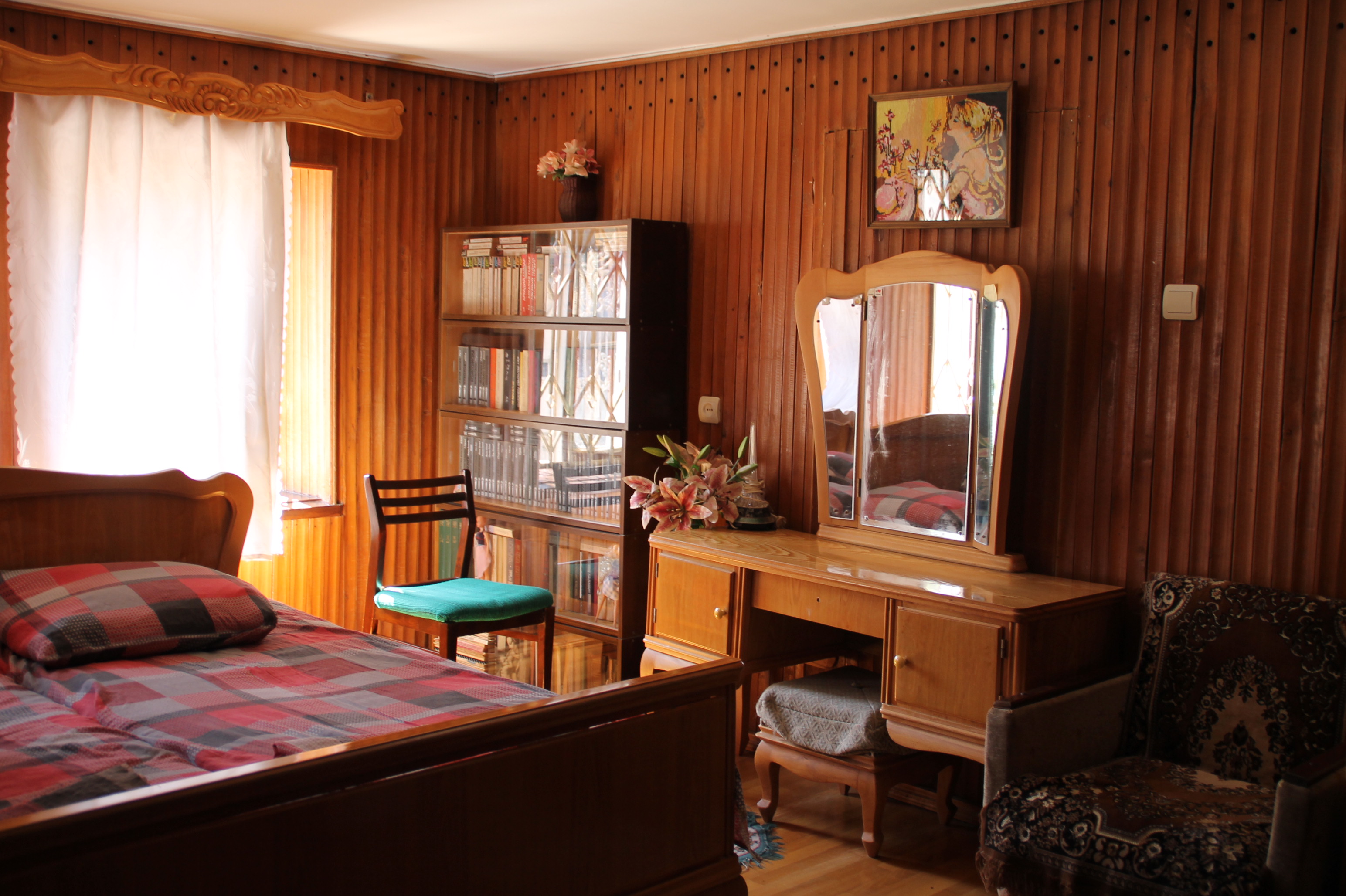 Our room in a guest house

We got an impression that the easiest way to find a place to sleep is to ask a taxi driver. They have many relatives and their wives have many relatives, someone of these relatives definitely runs a guest house. If you are lucky, you will be even invited to have a breakfast or a diner with the owner’s family. Prices are usually around 40-50 Lari for a double room. Following this approach we spontaneously agreed to spend a night at a taxi-driver’s place in Stepantsminda. Unfortunately, the promised dinner with the family was cancelled because the wife didn’t feel good. But as a reward, we were allowed to ride a horse for a short time.

Talking about the disadvantages, the mattresses can be either worn (that happened to us three out of five times in guesthouses and once in a hotel in Tbilisi) or too hard; sometimes it is too hot in the room because no air-conditioning is installed (applies to the hotels too). This could become a real problem in summer, indeed. Even in the end of September, when we were in Kutaisi, the temperatures were around 38 ̊. From the good things, Wi-Fi is usually available and the quality of connection is ok.

One thing we have seen in a Georgian hotel and nowhere else: an elevator where you are being forced to put money (a tiny coin of a fixed size that you probably will never have) in an old automat to go up- or downwards. We mostly walked, not having enough small money.

Recap: when choosing between a night in a hotel or at a local’s place, choose the local’s. There you can get a vital impression and understanding of the everyday life of Georgians. If you are interested in that, of course. 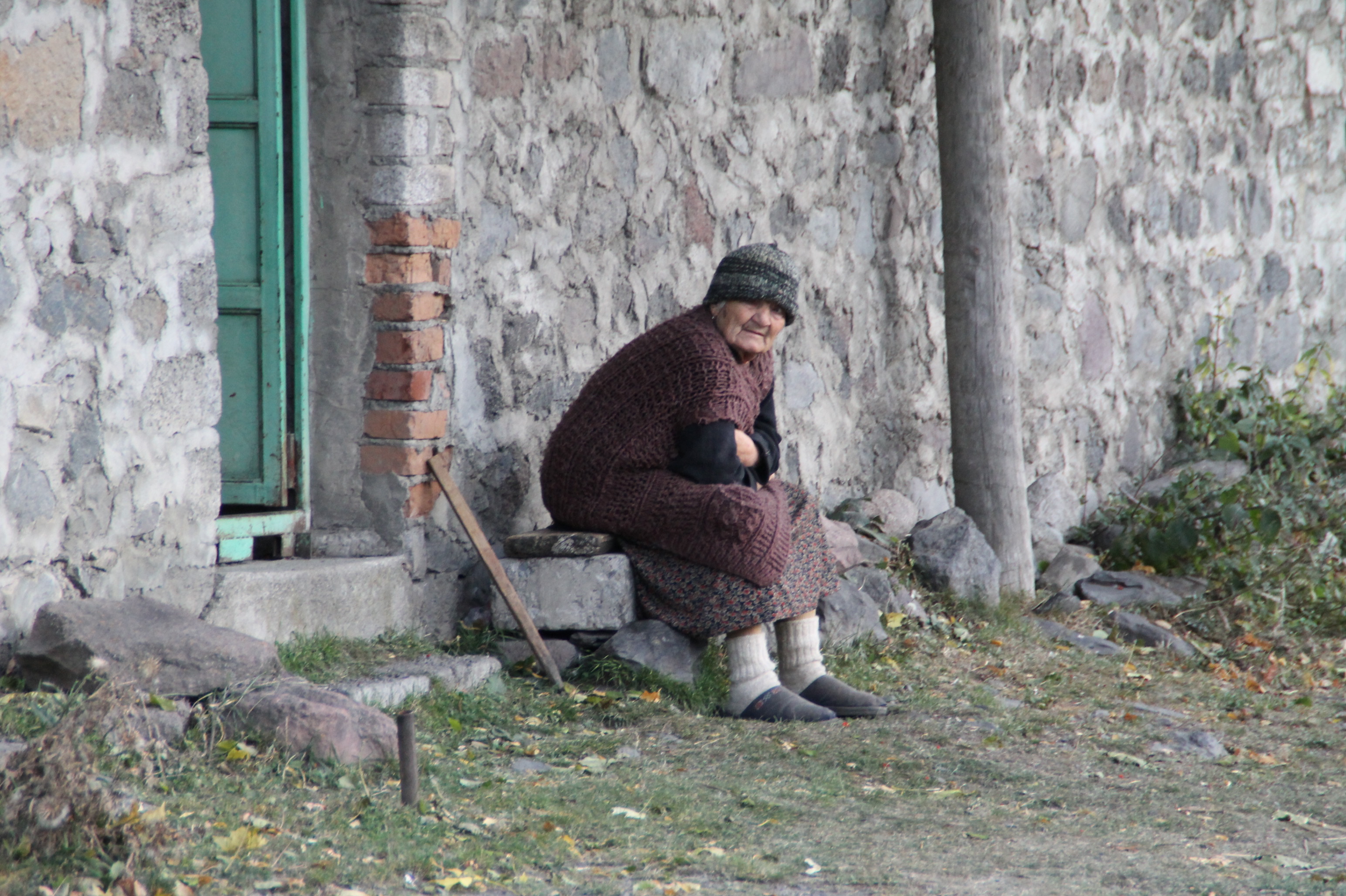 On the streets of Stepantsminda

The city of Kutaisi is not excessively crowded by the tourists; therefore, it is very pleasant to stroll down the streets and wandering around. The Rioni river (or at least the part that is flowing through Kutaisi) looks very dry, but there is even some charm in it: the banks are white and the water is light blue. 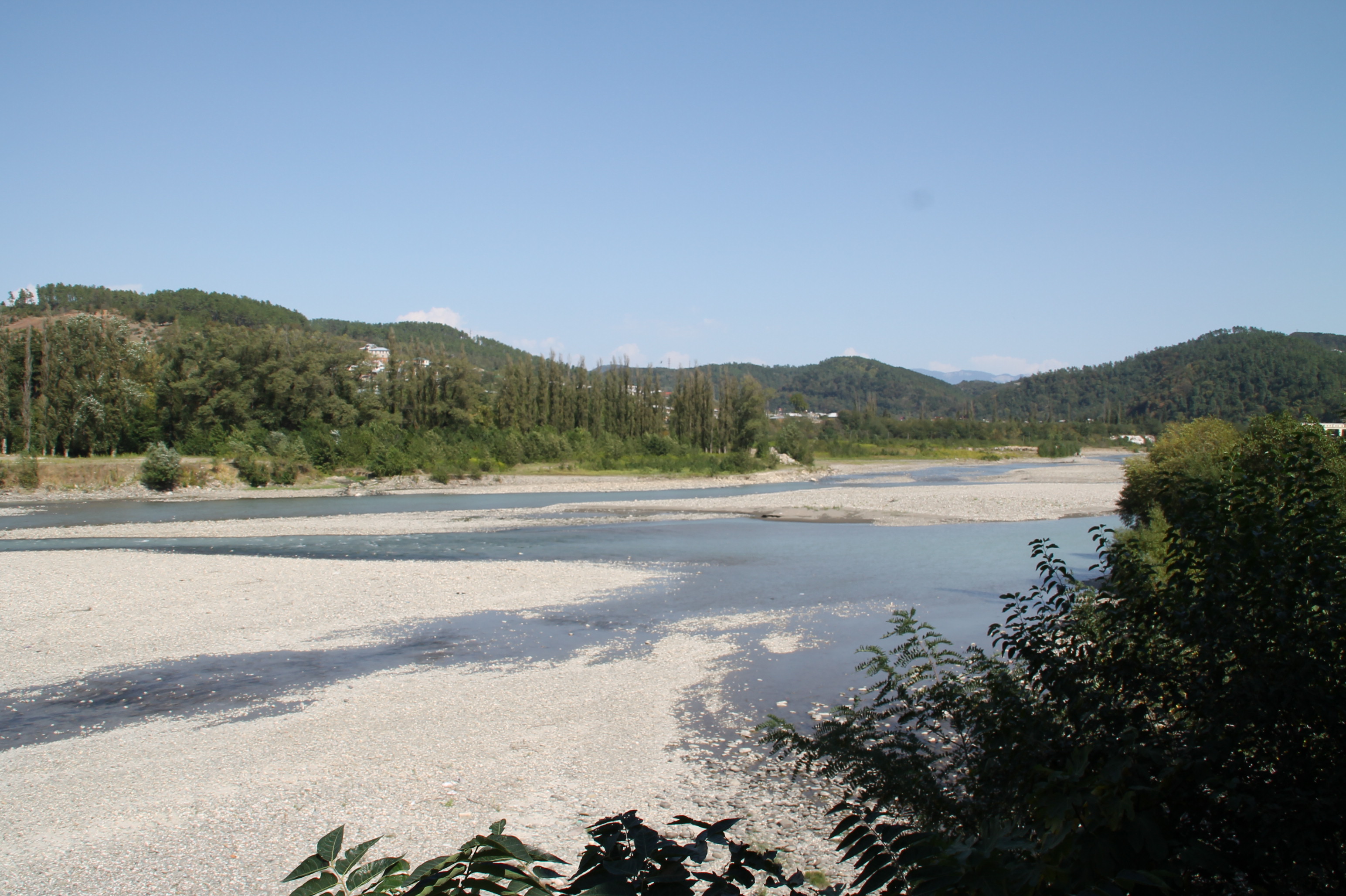 While exploring the city we met a big shaggy amiable dog who suddenly decided to become “our” dog and followed us inside the city for a long time. By the way, there are many homeless dogs (and cats) in Georgia, but in general they are harmless and friendly. 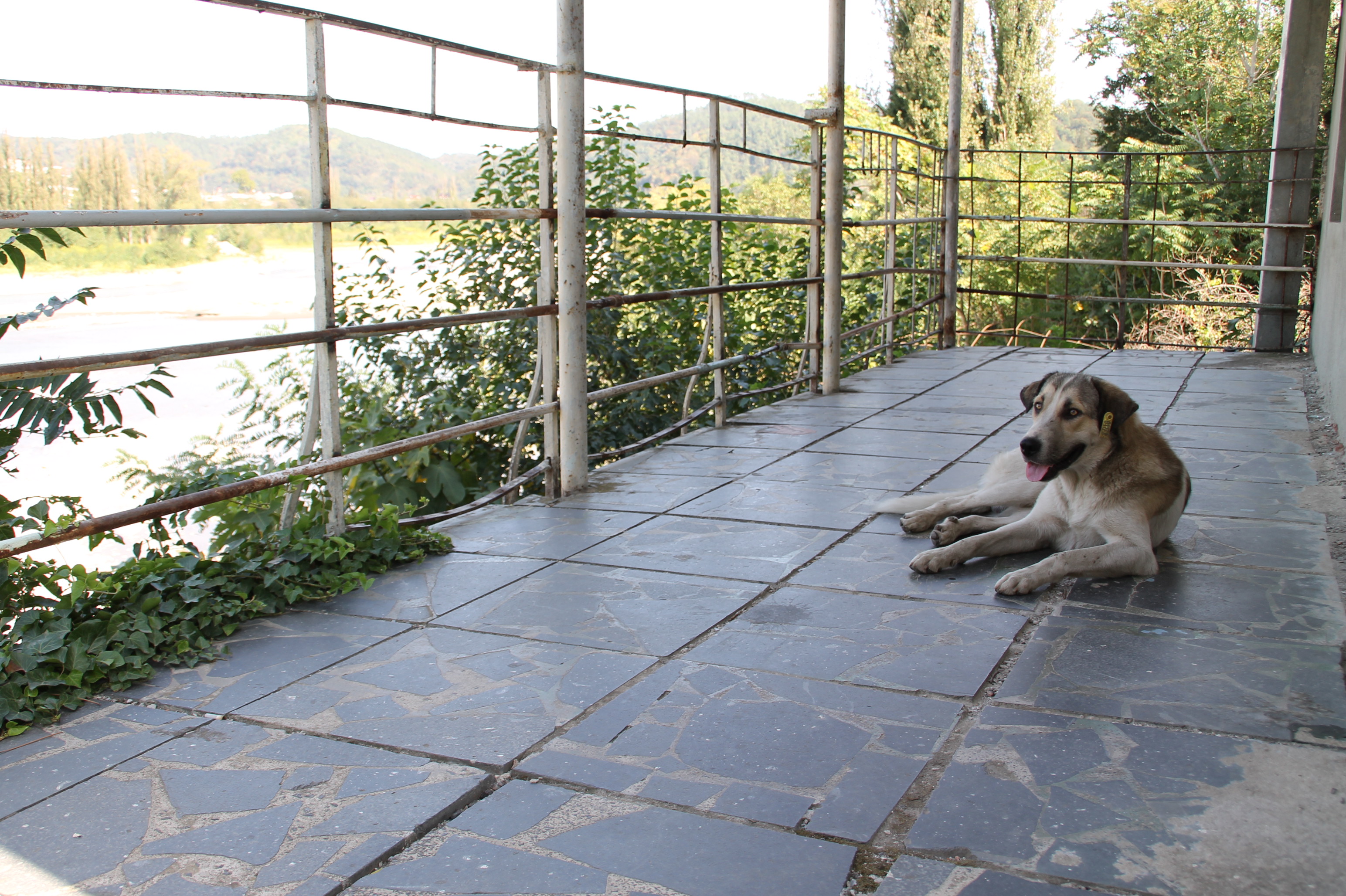 An outstanding site that you should visit in Imereti region is situated next to Tskhaltubo village 20 km away from Kutaisi. It is the Prometheus cave complex, also known as Kumistavi cave. Excursions are conducted in Georgian, Russian and English (rarely). This 1,2 km long cave is immensely colorful, beautiful, well-featured and totally impressive. At the end of our tour we left the cave in a boat through a dark narrow channel. Nice and funny experience. 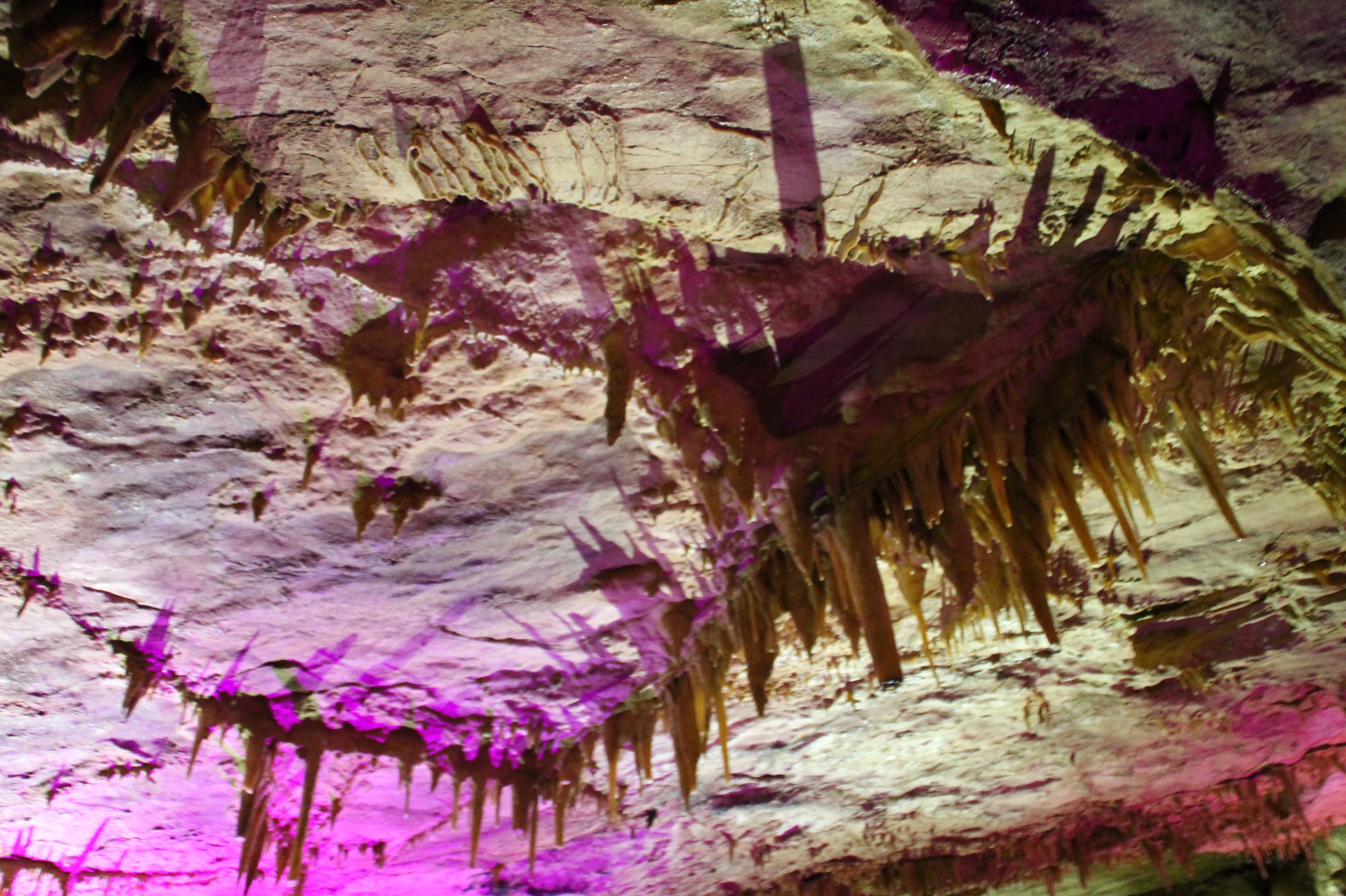 All information about the opening hours and public transport to the Prometheus caves can be found here: http://apa.gov.ge/en/eco-tourism/vizitorTa-centrebi/prometes-mRvime.

On the way to the Prometheus cave, we have seen many abandoned buildings which remotely reminded of luxurious castles. Our taxi-driver, Timur, explained that these buildings are the former popular Soviet Union resorts and are currently used as a shelter for the refugees. 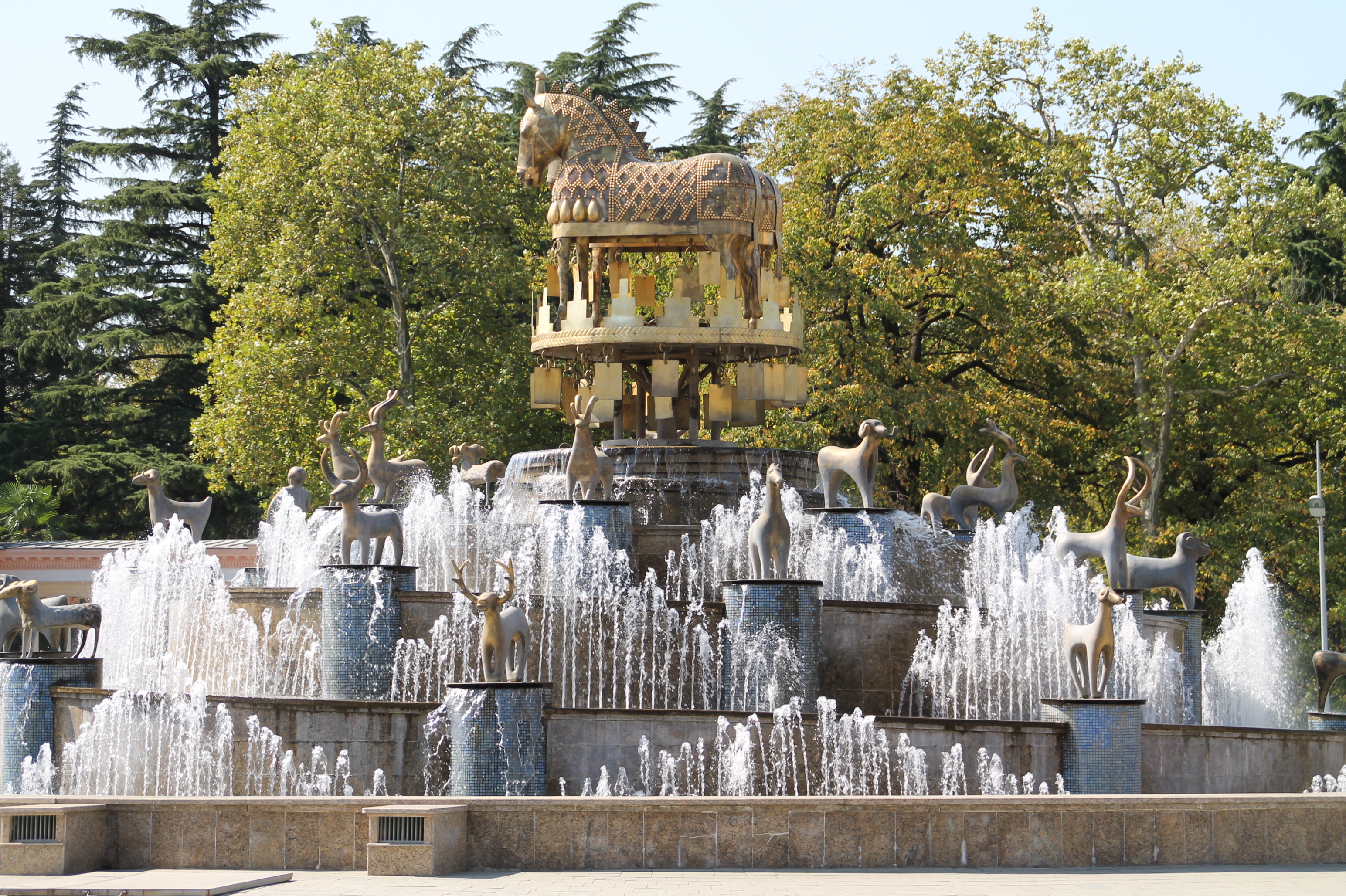 The second largest city in Georgia, Batumi reveals an amazing combination of a cozy Georgian town, an ultramodern city and an important Black Sea resort and port. Besides, many casinos are situated there. The city center consists of many beautiful two-three-store classical 19th century houses. An interesting place for visitors is Piazza with Italian (!) fleur. 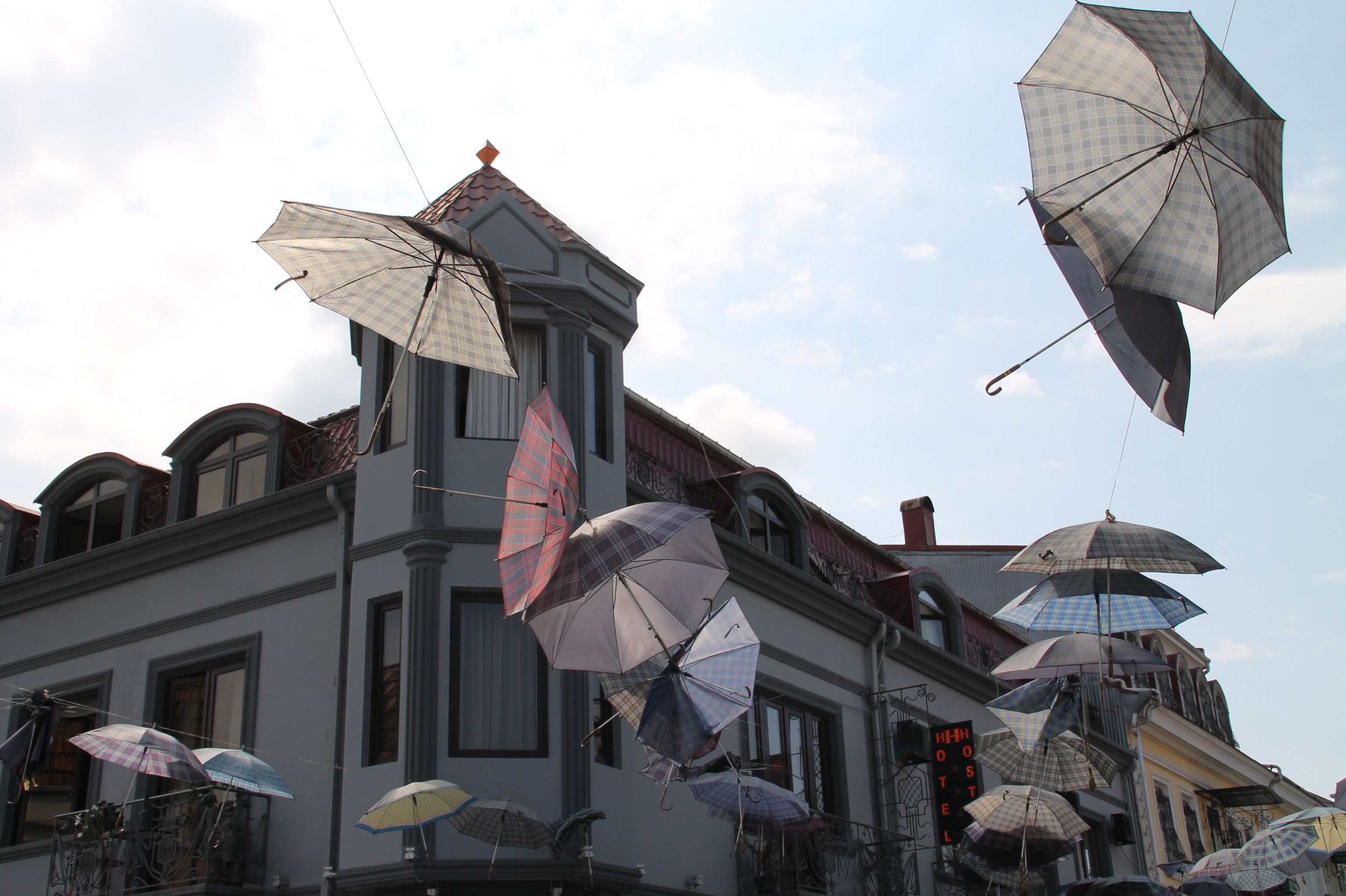 A street in Batumi

The embankment is full of high buildings and towers that glitter and shimmer at night with all colors. A good example is the Alphabet Tower celebrating Georgian script and writing. The beach is stony:  in windy weather getting in and out from the water can be accompanied by some bruises. However, the water was pleasantly warm and very clean, though it was already the end of September. 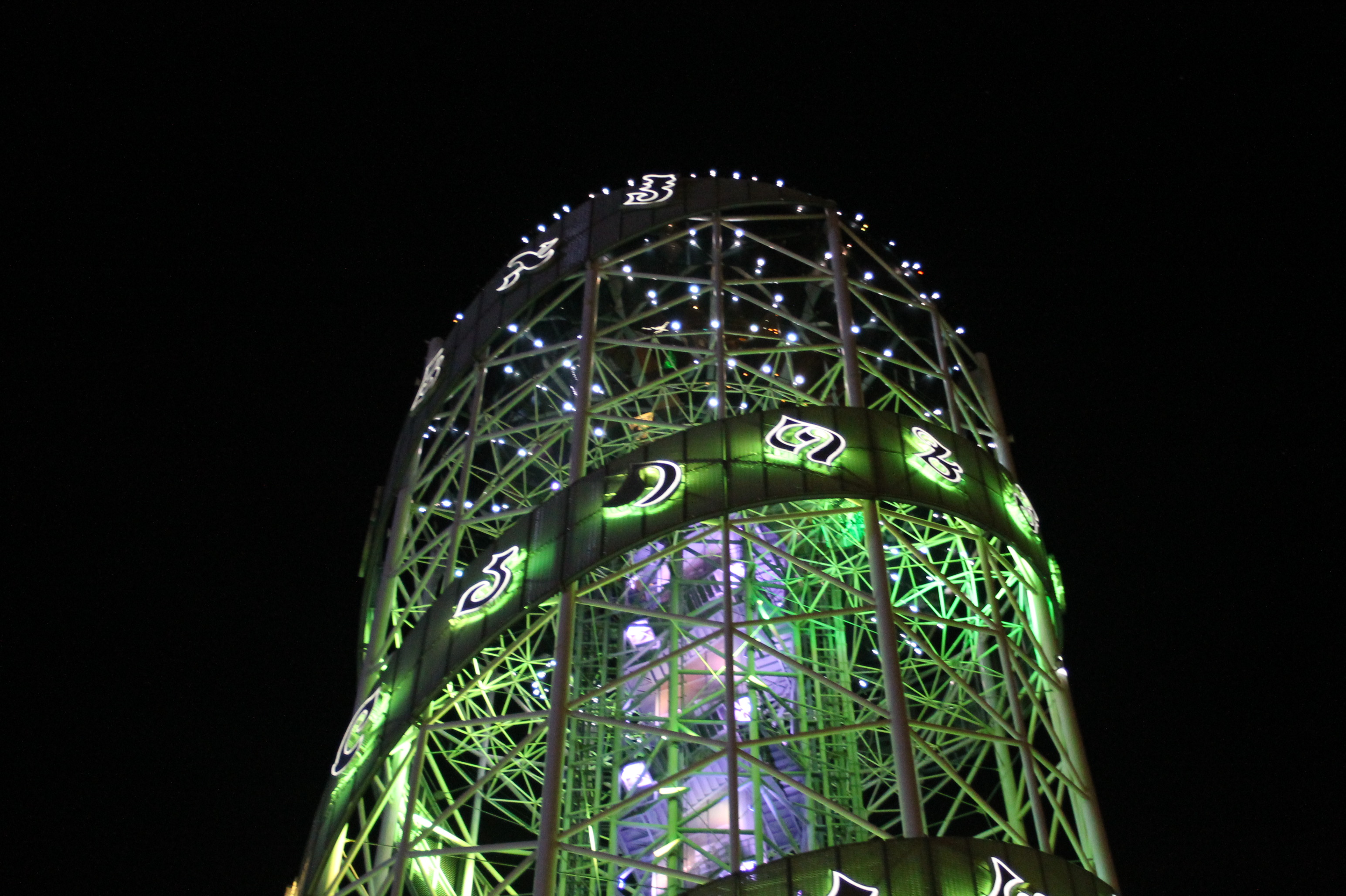 Strolling along the seafront of Batumi, you cannot pass by the huge 8-meter-height statue called “Man and Woman”. If you look a bit longer, you will notice that these two figures are moving. This statue is dedicated to a Muslim boy Ali and Georgian Princess Nino from a famous Azerbaijani author Kurban Said. The couple loved each other but was separated by Invasion of Soviet Russia. The statues look each other in the eyes, approach each other, “hug” for a couple of moments and then…go through each other and separate looking in opposite directions facing the bitter future: they had different cultural background, what in that times was fateful. 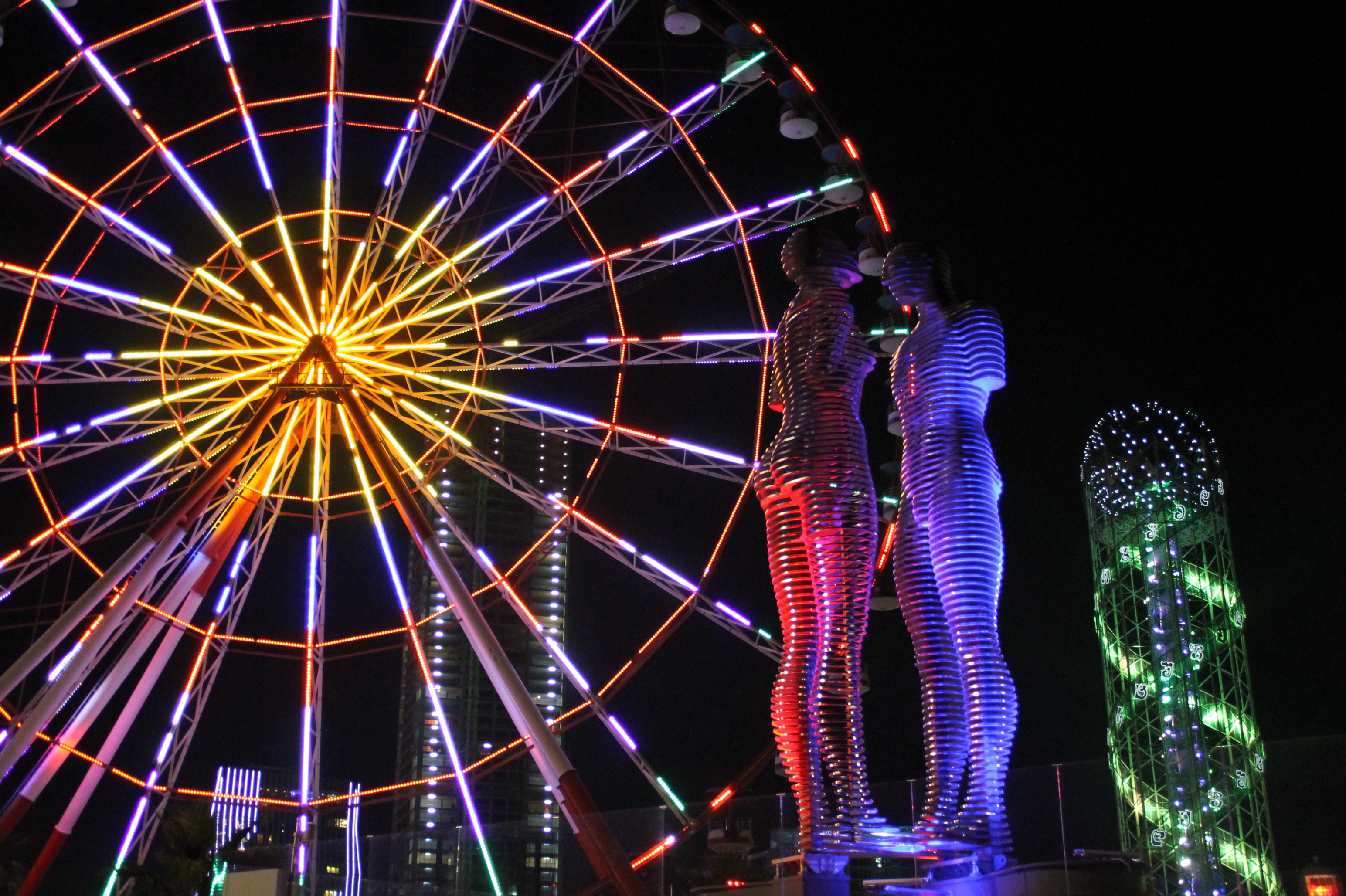 Going to this little village situated in the mountains in North-East Georgia is an absolute must! And when you are there, don’t skip the climbing the hill to Gergeti Trinity (Holy Trinity) church that is situated on elevation of 2170 meters on the right bank of the river Chkheri. 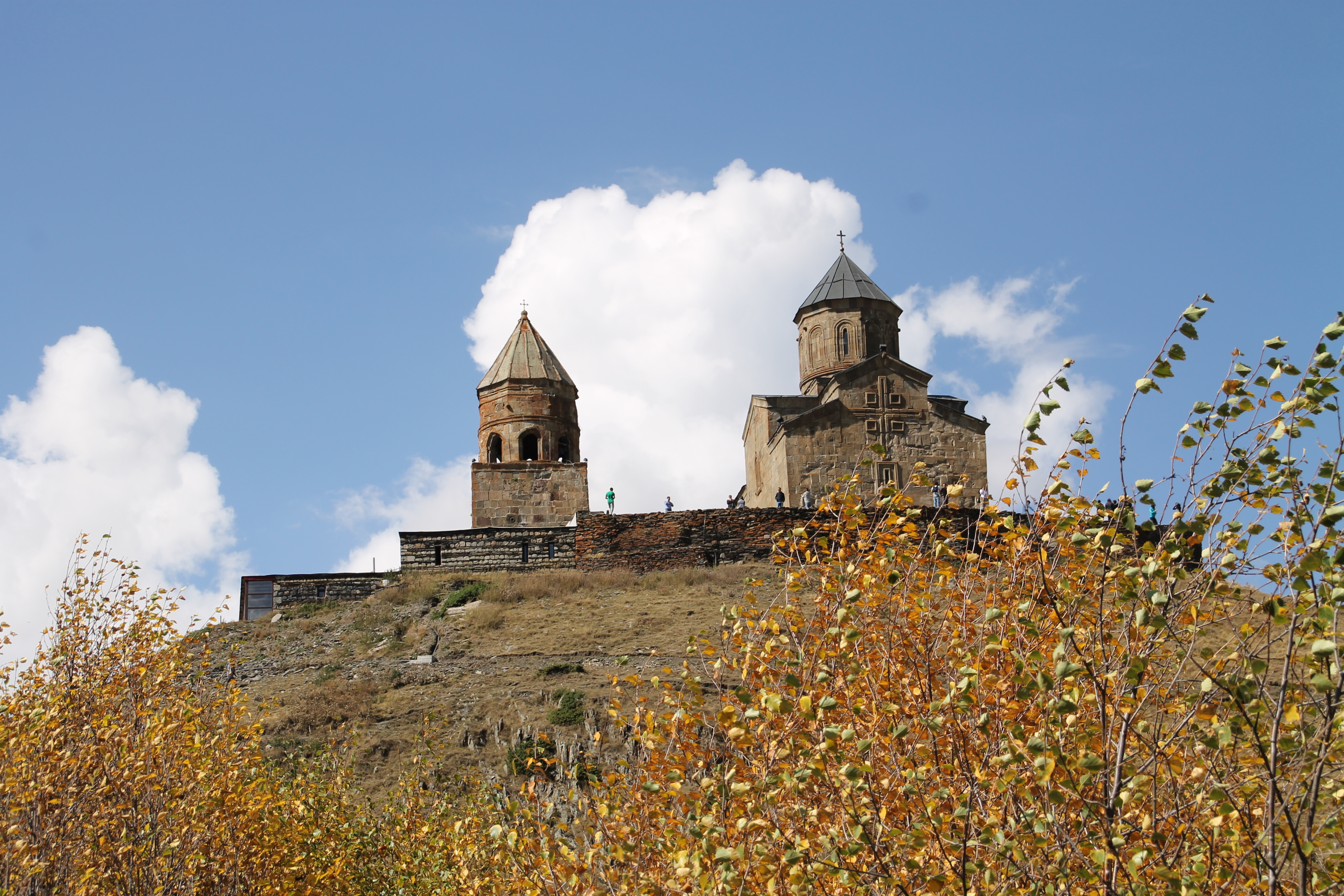 The route is described in all guides and the time of going up is estimated as at least 2 hours. It took us significantly less, about 40-50 minutes to get there (but we did a harsh job, because we were motivated to make it up and down before our departure to Tbilisi on the afternoon of the same day). At the foot of the hill we met two girls returning back from the hill who strongly recommended taking the left path. We followed the advice and were almost alone on the steep hill. Climbing through stones and thick grass was not easy at all, but definitely doable. 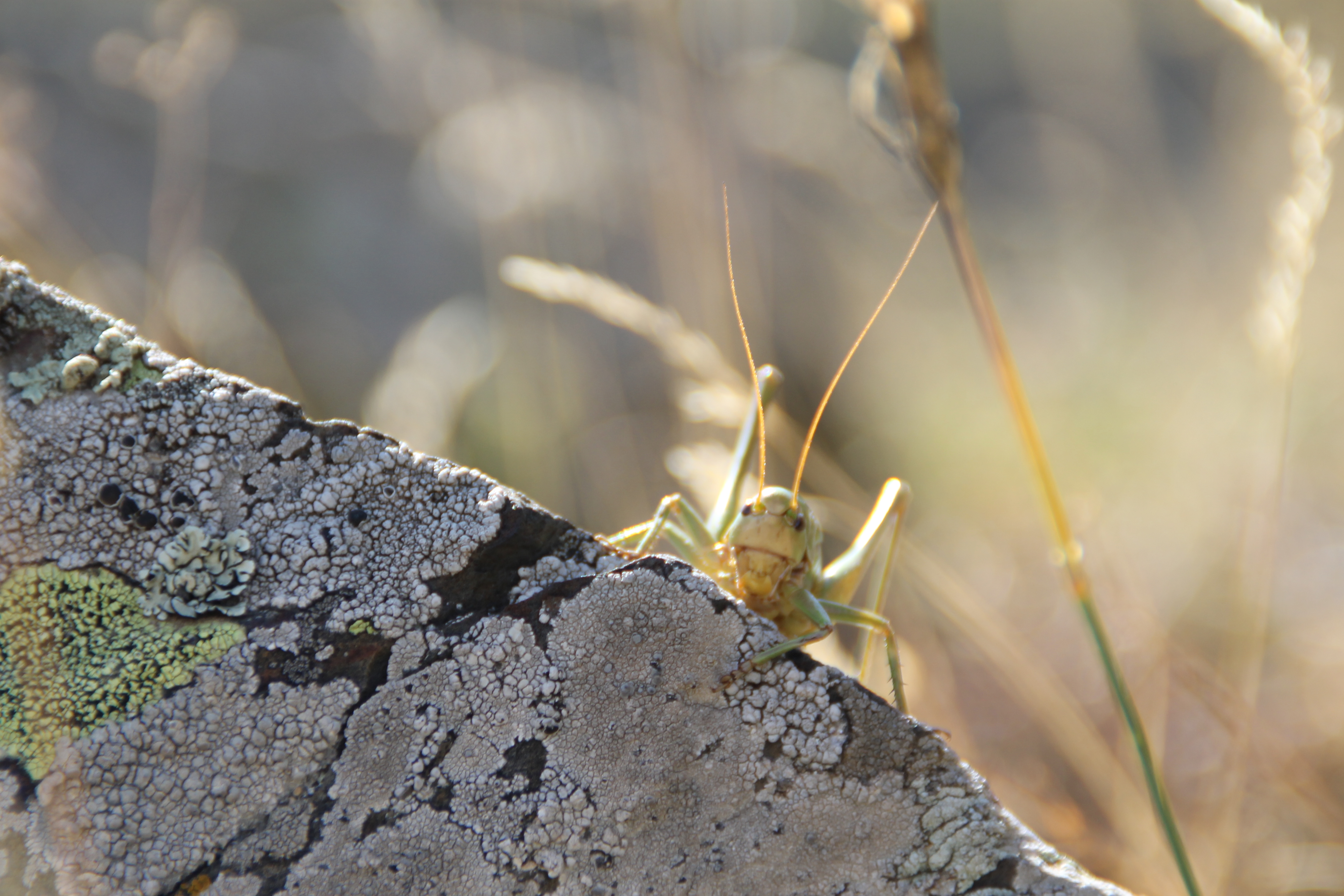 As an orientation point you should take 2 Georgian flags that you see right from the beginning and then go up-up-up without extra thinking. The view during the ascent is stunning. So please don’t forget making small breaks and looking around while hiking. You will also be rewarded by the clean and fresh air. Other paths cannot boast about this: they are completely dusty, crowded and slippery and going through the softwood forest that is dusty as well. When we were down, we tried to persuade people to choose the route that we took to climb uphill – but it didn’t work well. So, please, take the left one to enjoy your climb. 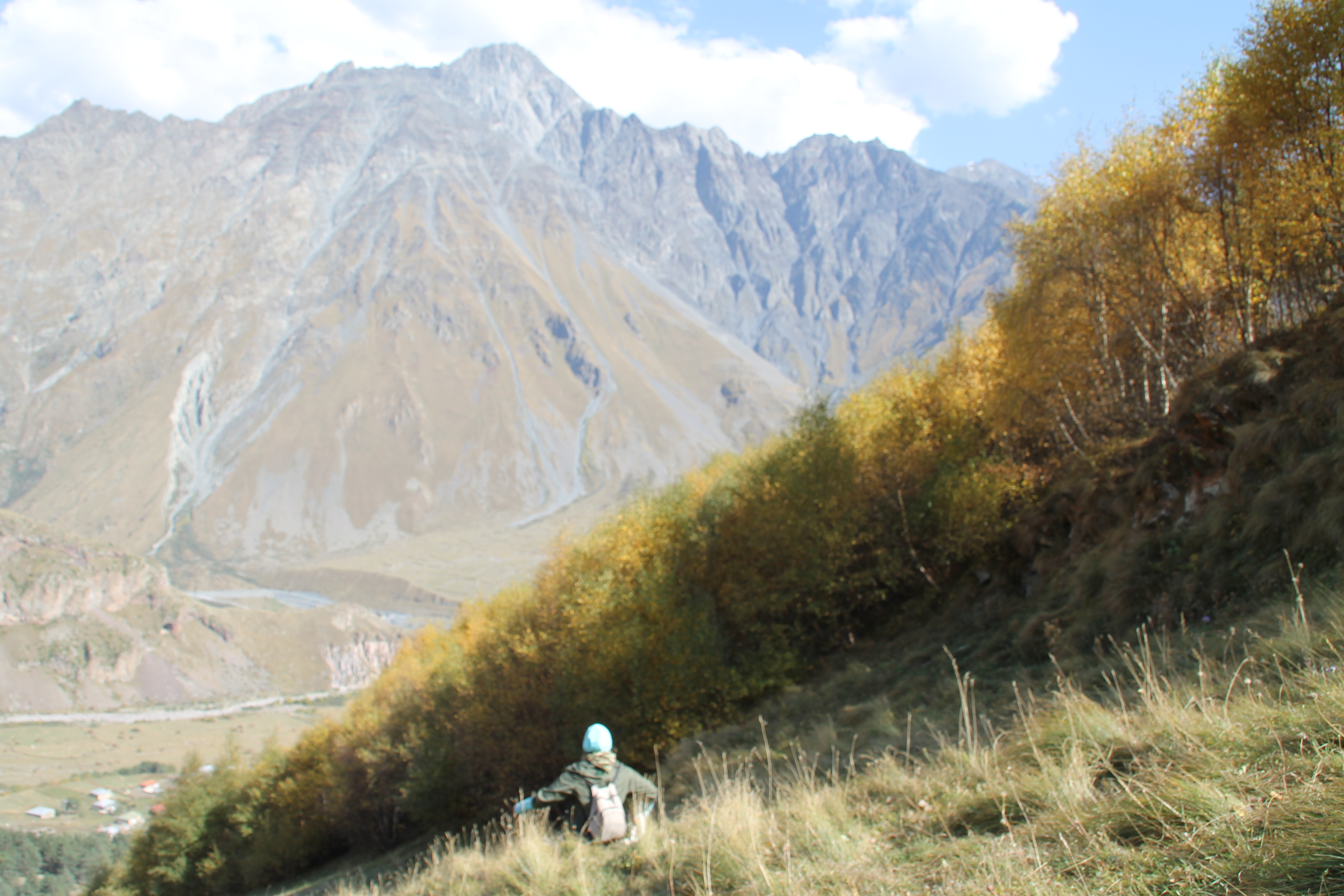 Gergeti Trinity Church was built in 14th century and is considered one of the symbols of Georgia. For example, we had a photo of it on the cover of our guidebook. To enter the church it you have to follow strict rules: ladies need a long skirt and a scarf, men – long trousers. Inside it is very small but soulful. I had a very special feeling when we made a little round inside.

Hotel Rooms Kazbegi offers a beautiful view to the hill of Gergeti Trinity church and the mountain Kazbeg. The rooms there cost 150-200 Euro that is probably overpriced compared to the price we paid at the guesthouse. However, the entry to the terrace with a very relaxed atmosphere and gratis Wi-Fi is free. Drop by there to have a drink and to shoot a couple of photos. 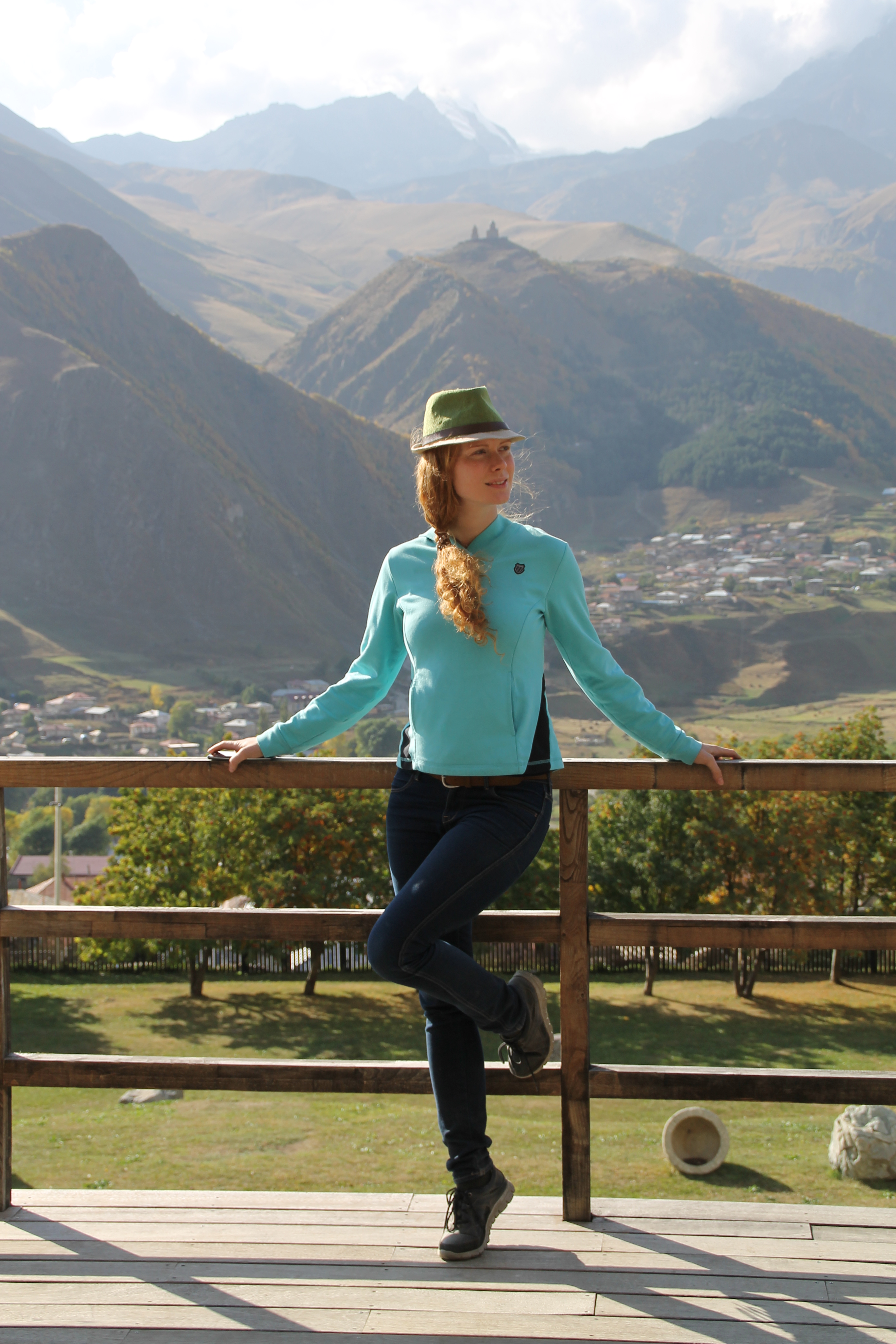 Tbilisi (former – Tiflis) is, indeed, an impressive, diverse and safe (one of the safest in Europe) city. It is stretched over the banks of Kura River and guards many centuries of Georgian history (it was founded in the 5th century). The highlight of course the Georgian churches and cathedrals, the Church of Metekhi, Sioni Cathedral and Sameba Cathedral.

Another side of the city life demonstrate the Parliament and the government (State Chancellery) buildings of Georgia, as well as the Supreme Court of Georgia, all situated in the close proximity of the Freedom square.

A breathtaking view to the old city opens from the historic neighborhood of Metekhi church. 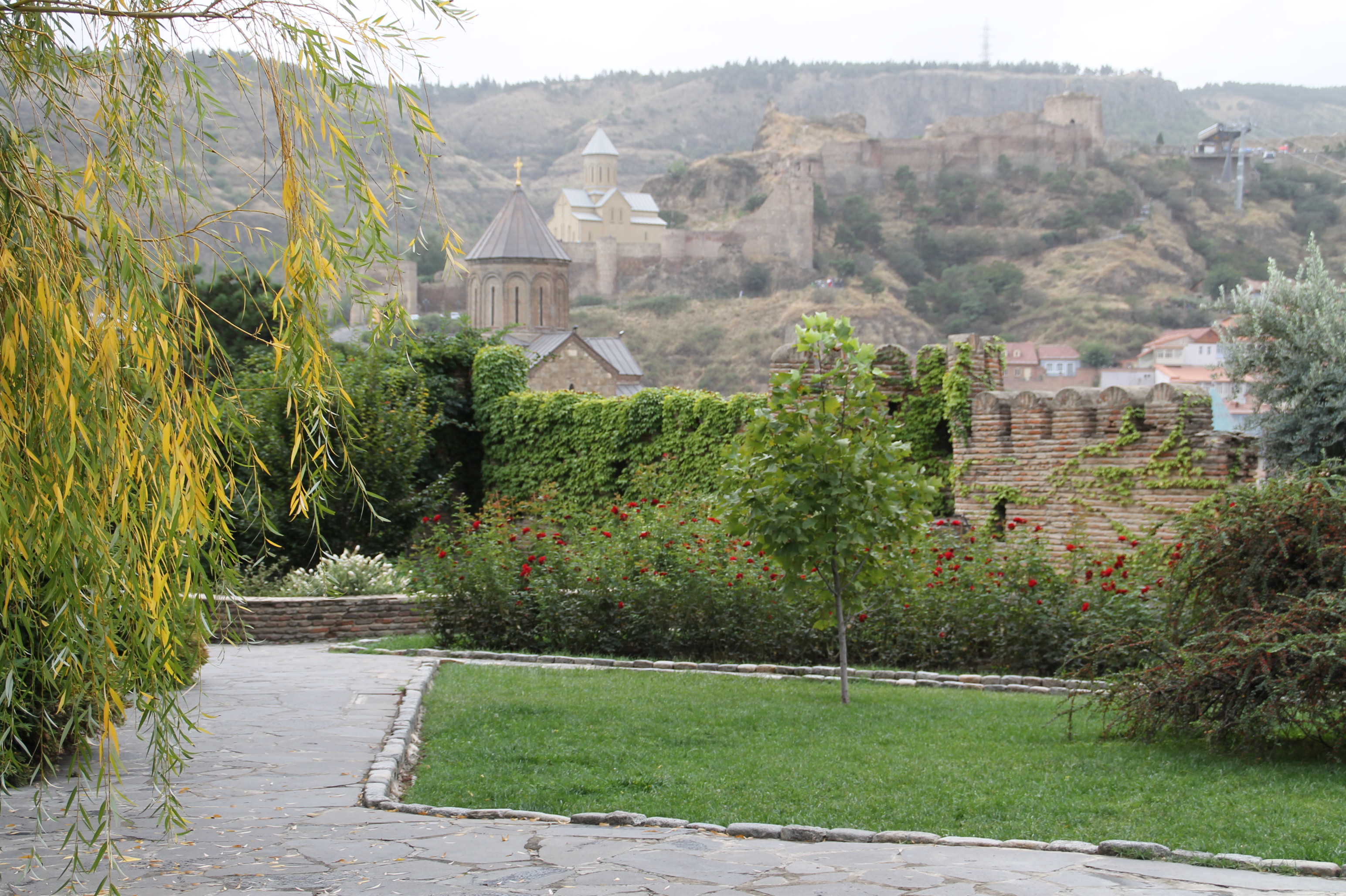 You can’t skip walking across the Bridge of Peace, a pedestrian bridge over the river Kura in a form of a bow connects Old Tbilisi and the new part of the city. There a nice park was created: children can train their martial arts skills, play chess (or with chess) and a giant white piano. 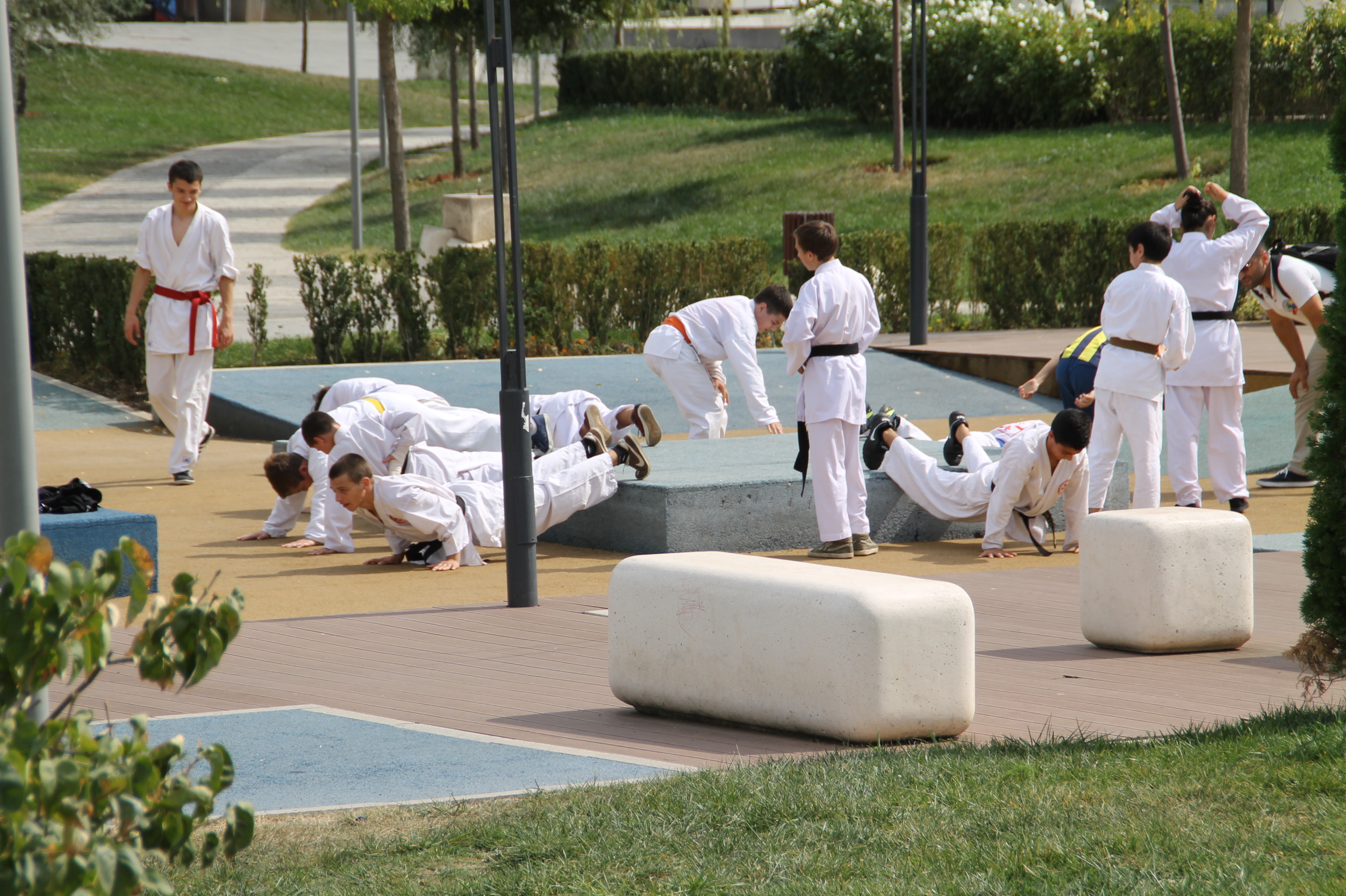 Park next to the Bridge of Peace

In 1905 a funicular was built in Tbilisi in order to revitalize the uninhabited Mtatsminda plateau. One ride costs 1 Lari. My advice is to go up with the funicular and then to take the stairs to the Narikala Fortress, an ancient fortress overlooking the city and the river. You will be rewarded with a nice view to the old city, Islamic quarter and mosque (to the right side). If you follow the steps till the foot of the hill you will find a very good souvenir shop with hand-made stuff. If you go further, you will reach the figure of Tamada the old bridge and the “party” street full of restaurants and shisha bars. 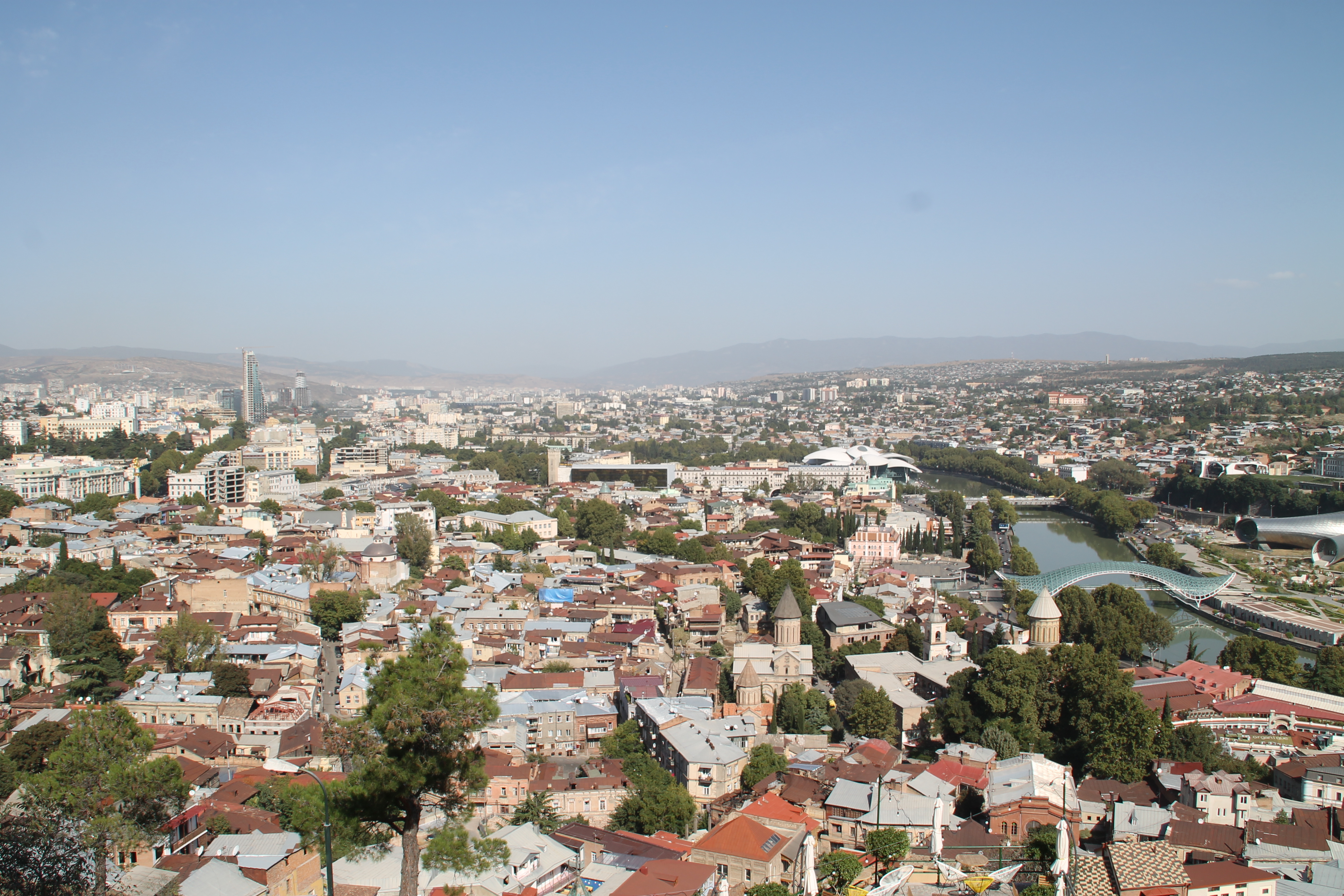 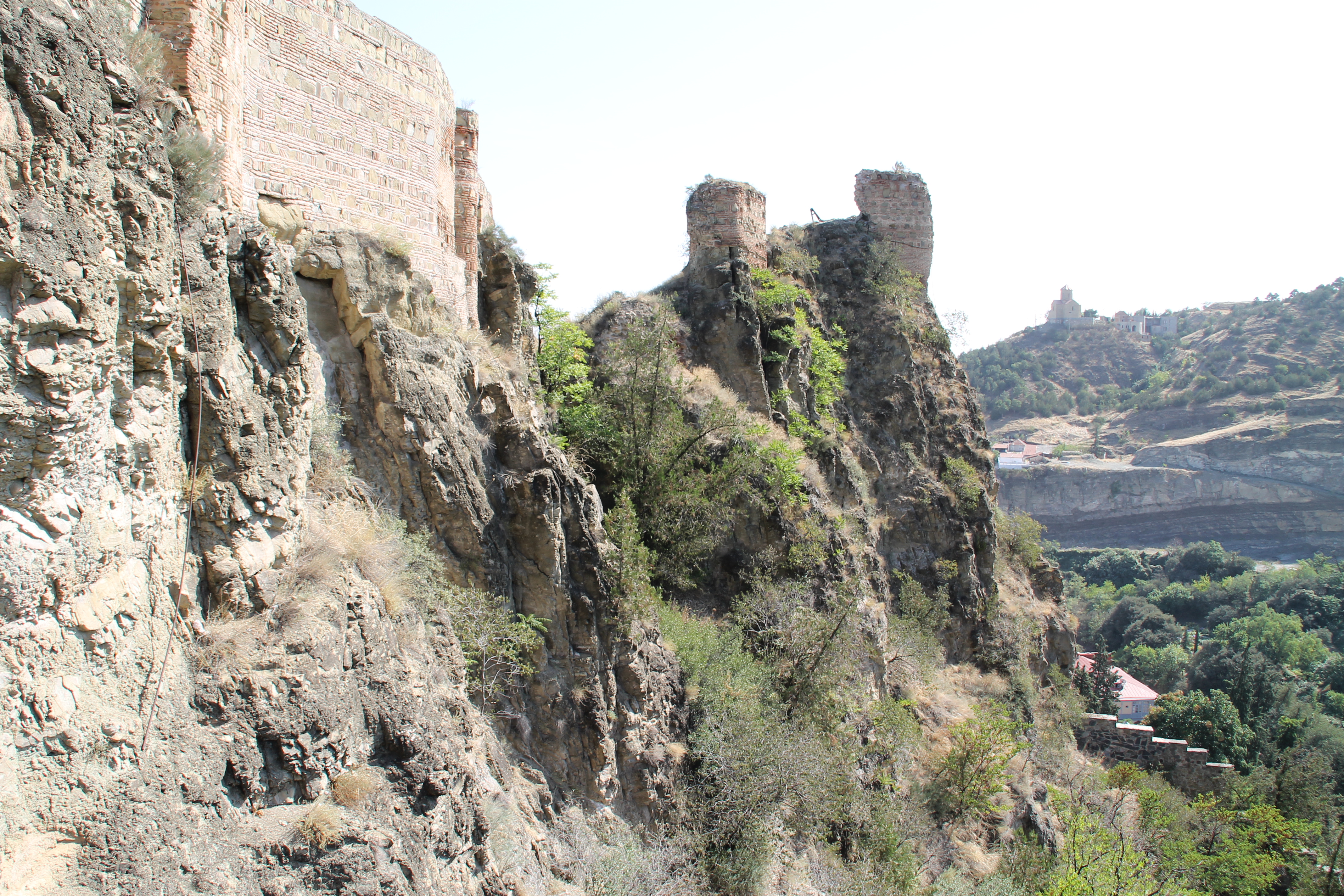 Since 1994 Mtsketa, one of the oldest cities in Georgia (founded in 5th century BC), is an UNESCO World Heritage Site. The city is relatively small and has a pleasant fleur: cobblestoned streets, one-store houses, harmonic combination of colors; summary in one word – cozy.

You have to visit the Svetitskhoveli Cathedral, a monument of utmost significance (and beauty); it is famous because of the role it played in the development of Georgian medieval architecture. Some people say that Mtsketa is the origin of early inscriptions that later were found to become Georgian alphabet.

A fascinating rock-hewn town, Uplistsikhe cave complex is situated close to Gori and is definitely worth a visit (and costs less than 1 Euro). This side is a harmonic combination of an ancient city and nature – it is one of the oldest urban settlements in Georgia built on the left bank of the Mtkvari River. You can spend many hours exploring narrow alleys and steep staircases meeting 15-20 cm in length geckos all around. On the top of this complex is a Christian basilica dated 9-10th century. Take my advice and put on non-slippery shoes –  the stones are very smooth and it gets extremely slippery after every little rain. 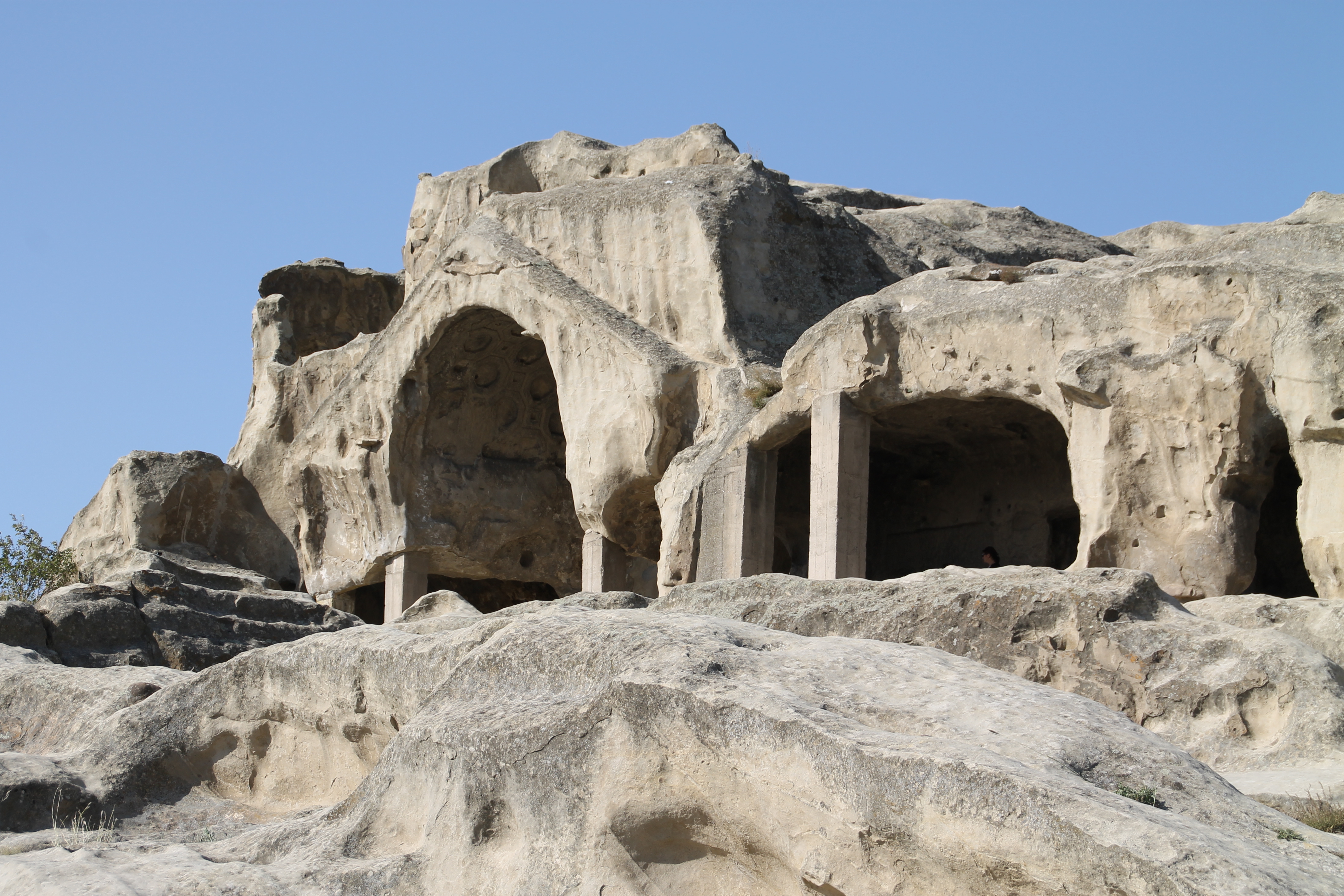 Five days that we spent in Georgia were amazing, but it was definitely not enough for this country. Next time – more nature, more Eastern part and more wine!