Very often, when you are looking through the photos of a place you want to visit, they appear a bit brighter than the place itself when you finally there. Photographers use filters and sophisticated means to make their works if not a piece of art but at least simply look better. I cannot argue, their works are catchy, but sometimes too far away from reality. In that sense, Colmar is exactly the same as when you see it on all the artistic pictures. It is bright and beautiful without any filters and colors’ amplification. Blossoming flowers, sweet gingerbread houses and lively channels… Total awesomeness!

We spend only one day in this city last weekend but this was enough for the first acquaintance with the third-largest city in Alsace. Colmar is one of the oldest (founded in 9th century) and most well-preserved cities in France. Remarkable that the first name of Colmar was Columbarium – “dovecote, pigeonry”.

Colmar is a peculiar open-air architectural museum where you can see all styles of architecture you can imagine. The city center is slightly bigger (and cuter) than you can imagine. You can endlessly stroll along the picturesque cobblestone streets gazing around on the half-timbered houses painted all colors of the palette and taking hundreds of photos.

We also liked the Côtes-du-rhône red wine that comes from the vineyards of the Rhone Valley. Combination with the variety of cheese and pouring rain was charming. In that restaurant we had a little adventure: initially we planned to walk around the old city, make some pictures in the sun and afterwards have a glass of wine. Our plans were probably too ambitious: it started raining cats and dogs after 10 minutes of our walk. We didn’t have a chance to choose a restaurant – we just went inside the closest one. We ordered wine and when the rain stopped switched to the terrace under a tent.

Soon it started raining again: the tent was not completely waterproof – so the drops were falling on us. Without thinking long, we opened our umbrellas and had the most romantic dinner I can imagine. That was, actually, not the end. At some peak point, when it was raining especially heavy, our tent started to fold (you remember this scary moment from the horror movies when the walls are moving towards you: it was it! But in our case, it was a wall of rain)… We had to make a decision and promptly prioritize: we saved our bags and our wine, the cheese was left soaking. This story had a happy end; the waiters in this restaurant were absolutely nice and brought us a refilled cheese plate on the house.

The highlight is without any doubts the Little Venice. The narrow river called Lauch runs through the city and is crossed by numerous bridges. A boat ride costs about 5 €. 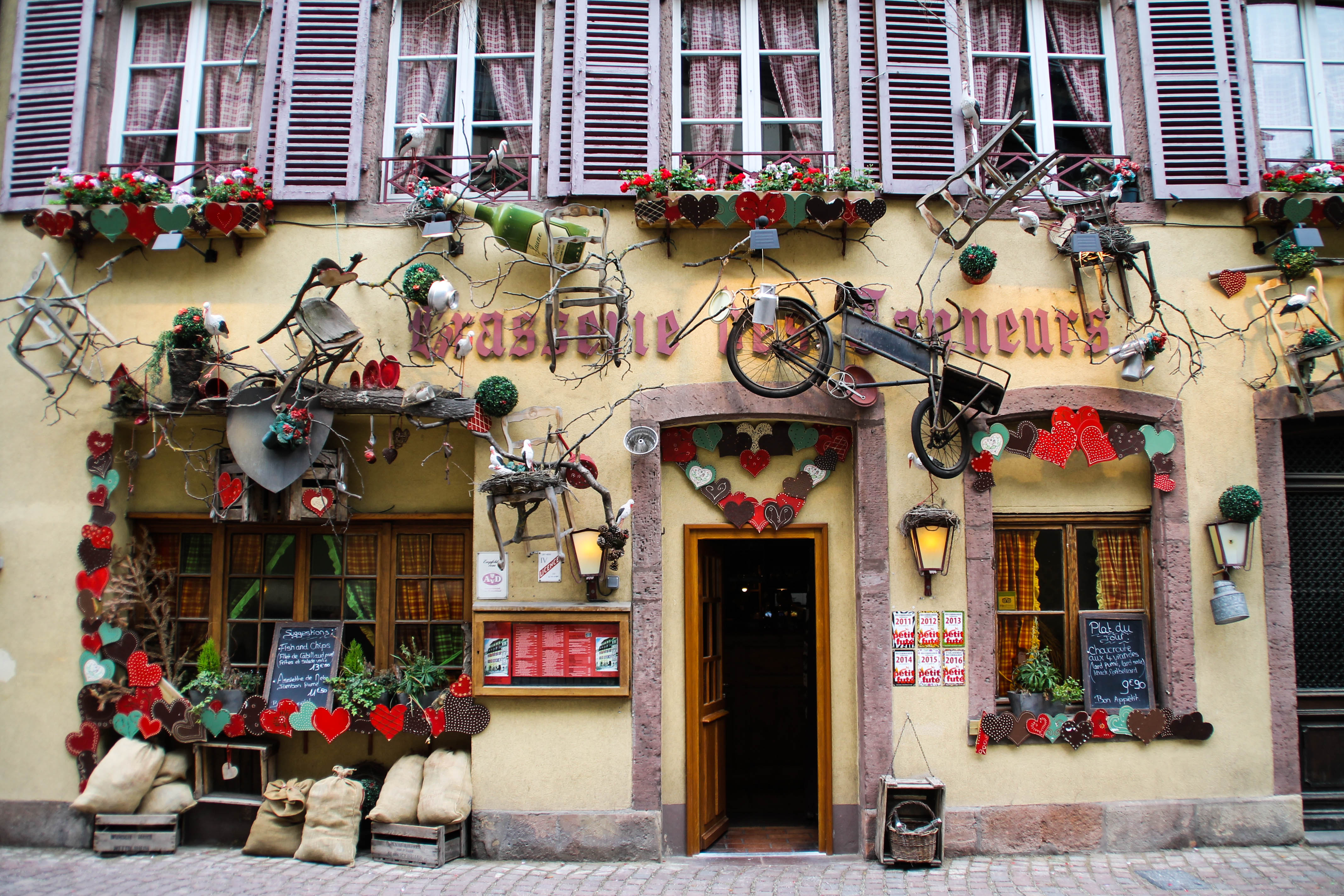 When you are walking down these streets you will not miss the Koifhus, a former customs house and the Schwendi fountain.

We also spotted the Market hall, but half of shops were unfortunately closed on Sunday.

Colmar is the city where the author of the famous Statue of Liberty, Frederic Bartholdi was born. Therefore, you can find a smaller 12-meter replica of this monument to the north from the city.

This city served for the design of the scenery of the Japanese animated film “Howl’s moving castle” (2004). The animators’ team was searching for the suitable landscape all around Europe and found it in Colmar.

To finish with, here is a couple of organizational moments:

To get to Colmar, fly to Euroairport (BSL, Basel Mulhouse Freiburg) and either take a direct bus (e.g. Flixbus) to Colmar, or first go to Basel with a regular bus No. 50, take couple of hours to explore this city and board the Flixbus bus which starts from Meret-Oppenheim Str. directly at the Basel main rail station. It takes you about an hour to reach Colmar.

Actually, a funny thing about this airport is that you have to decide what country you want to go to – France or Switzerland – when you are leaving the building. The explanation is that this airport is situated directly on the border of three countries: Germany, France and Switzerland and therefore has more than one exit.

On our trip, we chose the second option (spending 3 hours in Basel) and here are some photos of the city. 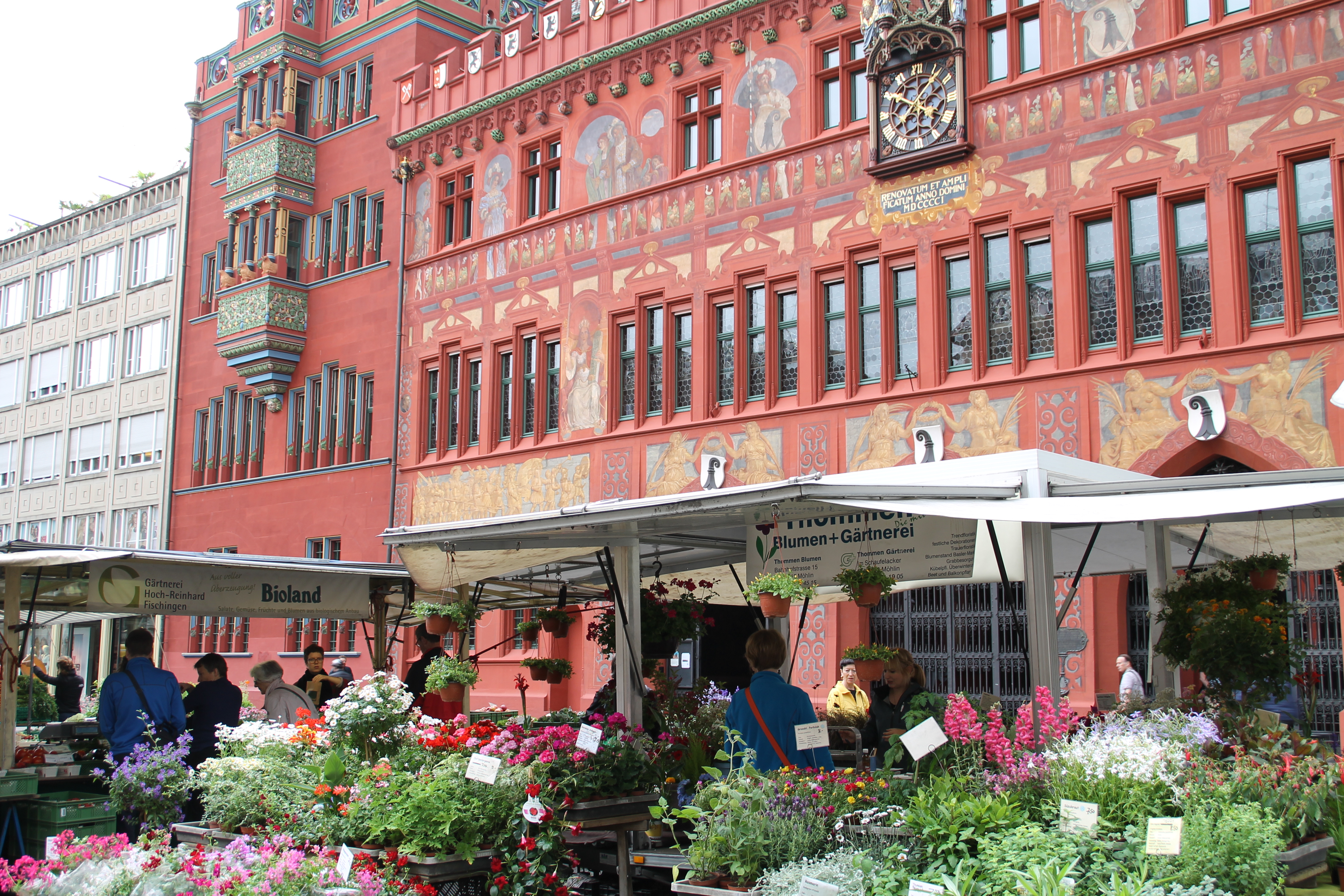 By the way, in Colmar you will find at least one spot of free public Wi-Fi next to the central train station.

To get back you can either go directly to the airport with Flixbus or choose a more complicated but interesting route: we first went to Freiburg and then to the airport. To go to Freiburg, you have to take the Euregiobus (operated by Kunegel) from the bus stop next to the train station or from the bus stop called “Theater”, timetable is here: http://www.suedbadenbus.de/suedbadenbus/view/mdb/suedbadenbus/freizeitangebote/pdf/2015/mdb_209365_sbg_fly_euregio_2016__internet.pdf, single trip costs about 5,30 € and lasts 45 minutes.

In Breisach you have to switch to the train that departs directly in front of the bus stop and is usually waiting for the arriving buses. Duration of the trip is 25 minutes and single ticket costs 5,40 € (you can buy the ticked from the ticket automat inside the train. First, we didn’t know that and shortly considered running to the station to buy a ticket. We would definitely not manage it in 2 minutes between the bus and the train and were grateful to our co-passengers who timely revealed the presence of a ticket machine).

Freiburg is worth a visit as well. We had only two hours but it was enough to draw a conclusion that we would come back for longer time and explore the city properly.

For later, we had an arrangement with a young man from blablacar who agreed to bring us from Freiburg to the Euroairport for 5 Euro p/p. It all worked out and we were very happy about our logistics: 2 days, 3 countries, 3 cities, 2 flights, 3 bus rides, 1 train and 1 car ride, a lot of walking, all caught up. Great weekend, yeah! 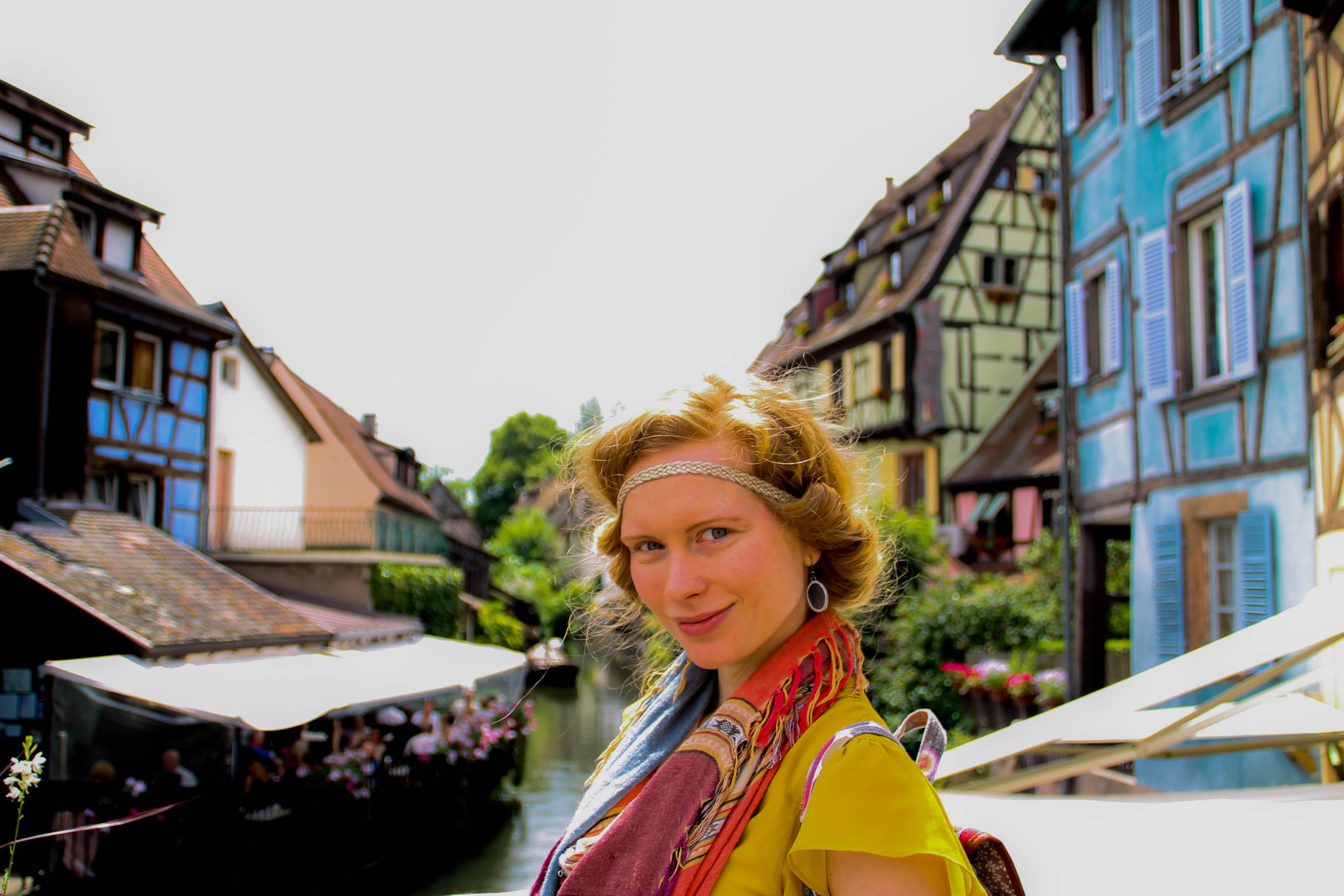