Now, when the most demanding component of our Mauritius trip (beaches) is covered here Mauritius best beaches, I can tell you more about the island and its other places and things of interest. 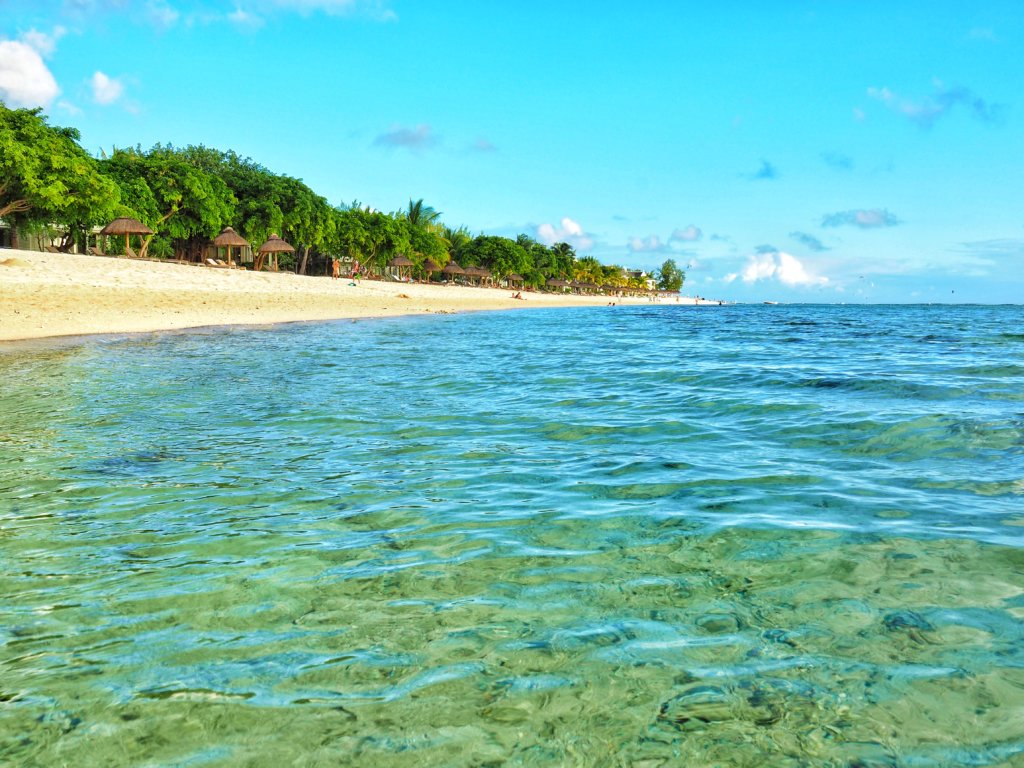 Actually, it is quite unusual for us to stay at the same hotel during the whole duration of a trip. However, Mauritius has simply suggested that: the island is so small that you need maximum 1,5 hours to drive from one furthest point to the opposite furthest point. We stayed in Mon Choisy, in the North-Western corner of the island and travelled around Mauritius by car, by motoroller and by public bus. 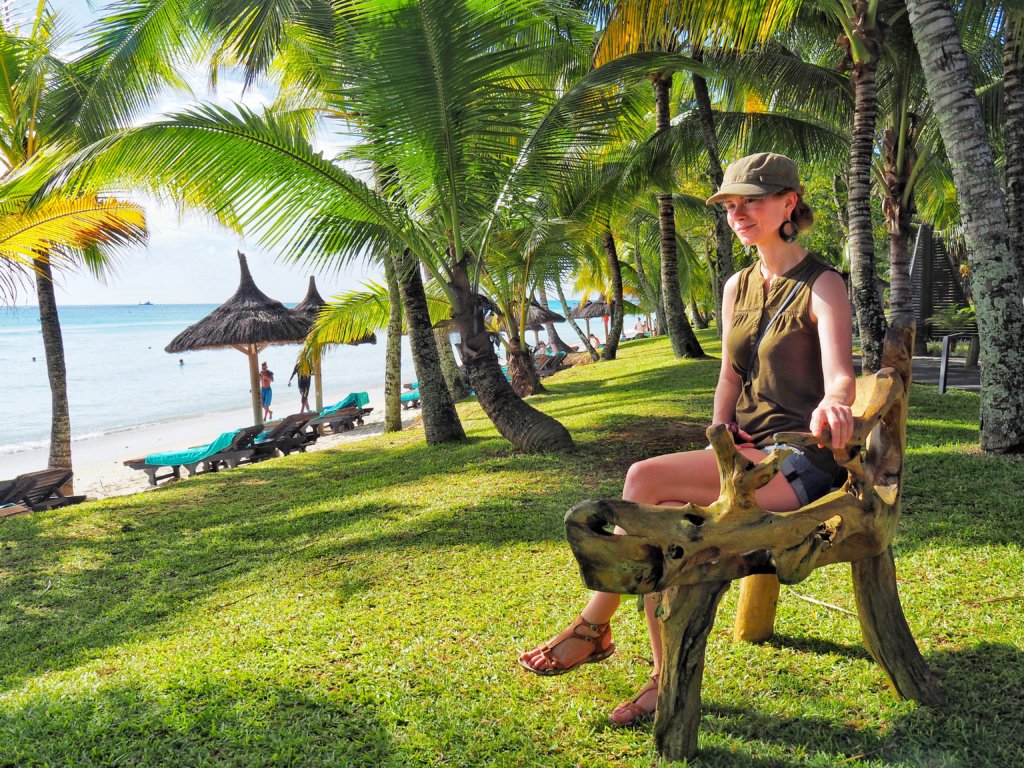 Our overall impression of the island is positive – there are no poisonous animals, bothering insects or dangerous illnesses on Mauritius. It is safe here, besides, you will not experience disturbing poverty, and people suffering or in deep misery. Even the dogs are quite healthy there, though they are in uncontrolled abundance. You can buy anything you want in the Western-like supermarkets and there are no stiff or stringent rules for your appearance and behavior. The local population of the island lives mostly from the higher then average priced tourism as well as from sugar and rum production. The beaches are extremely clean and taken care of, the water is clear and warm, and the climate is moderate. This is the reason why so many couples choose this island to get married here, to spend their honeymoon here travel with little children.

After we landed, before proceeding to the customs, we were asked to fill out two forms: a disembarkation card (white) and a health condition card (yellow). Useful tip: keep a pen at hand! (On departure, you don’t have to fill in anything)

The currency here is Mauritian rupee which is about 0,025 of an Euro (1€ ~ 40 MUR). At the airport, the ATMs are to be found outside the arrivals building, the currency exchange offices are inside the building. In all bigger cities you can easily find an ATM or an exchange. 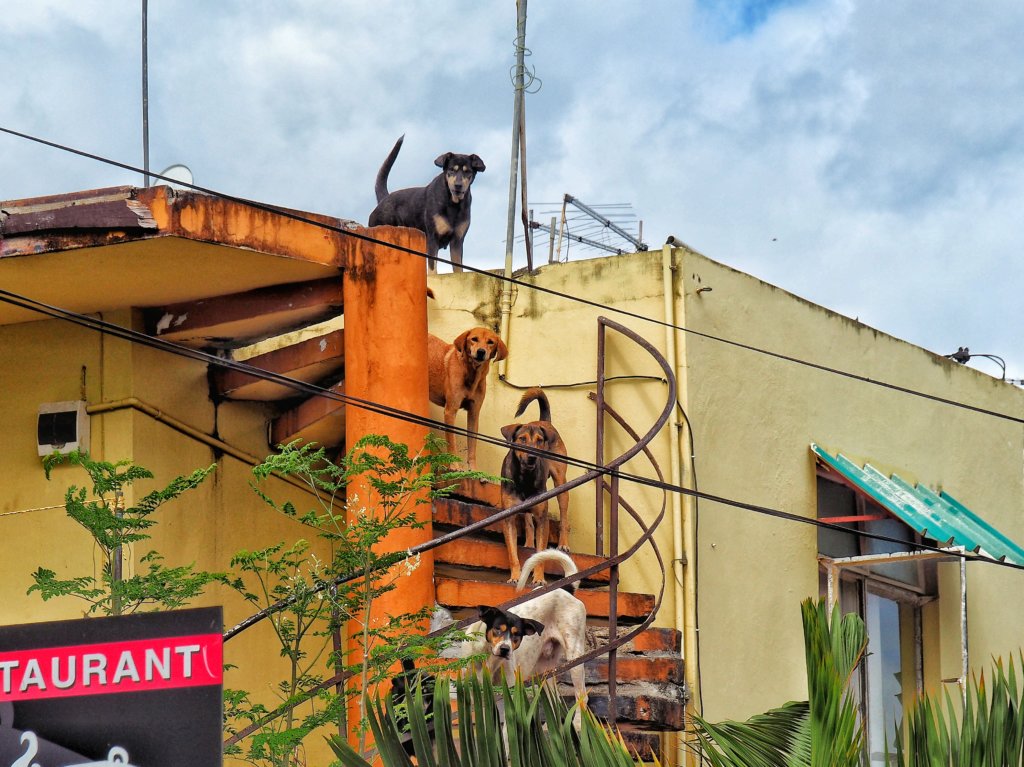 Taxi from the airport was the most expensive means of transport, but it depends on where you go: we had to cross the whole island to reach Mon Choisy. The ride took almost 1,5 hours and cost us 1500 rupees (1600 rupees early in the morning). We landed on Sunday and faced the fact that there were no public buses this day of the week and official taxis had fixed price: 2200 rupees to Mon Choisy. We negotiated the price with a random driver aside from the official taxi stand. The same driver picked us up on our way back to the airport. 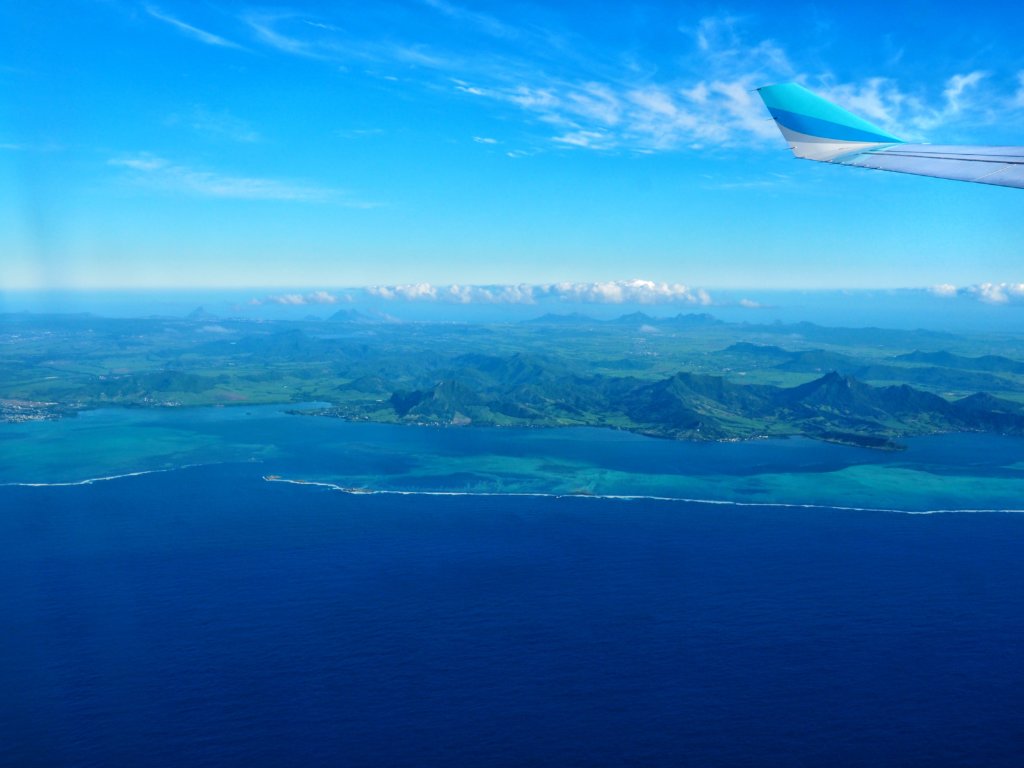 Mauritius grows a whole range of delicious fruit and vegetables: papaya, coconut, pineapple, maracuja, melon, dragon fruit, avocado can be bought at the fruit stands from the local sellers. But some local specialties are not as common in the outside world. 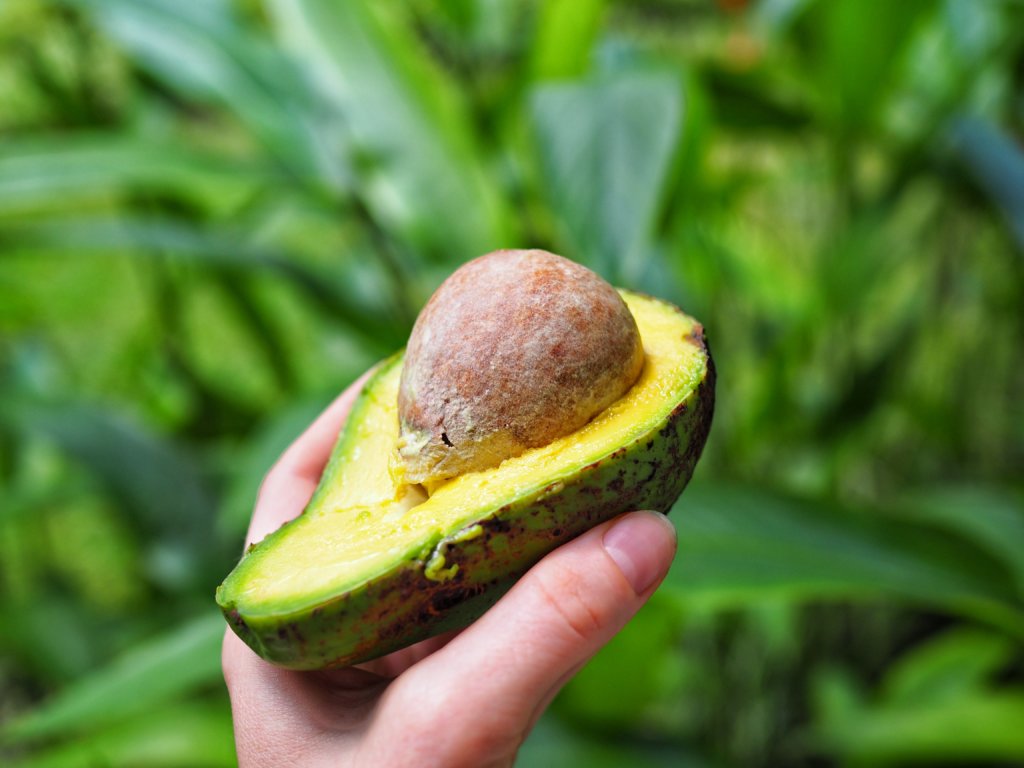 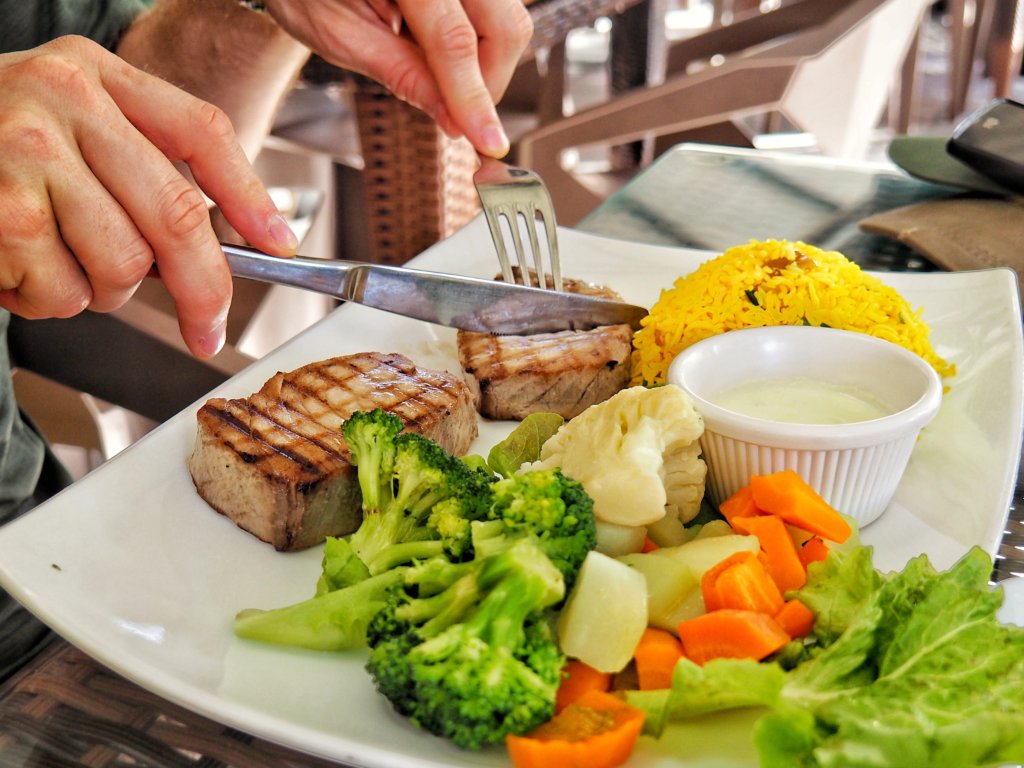 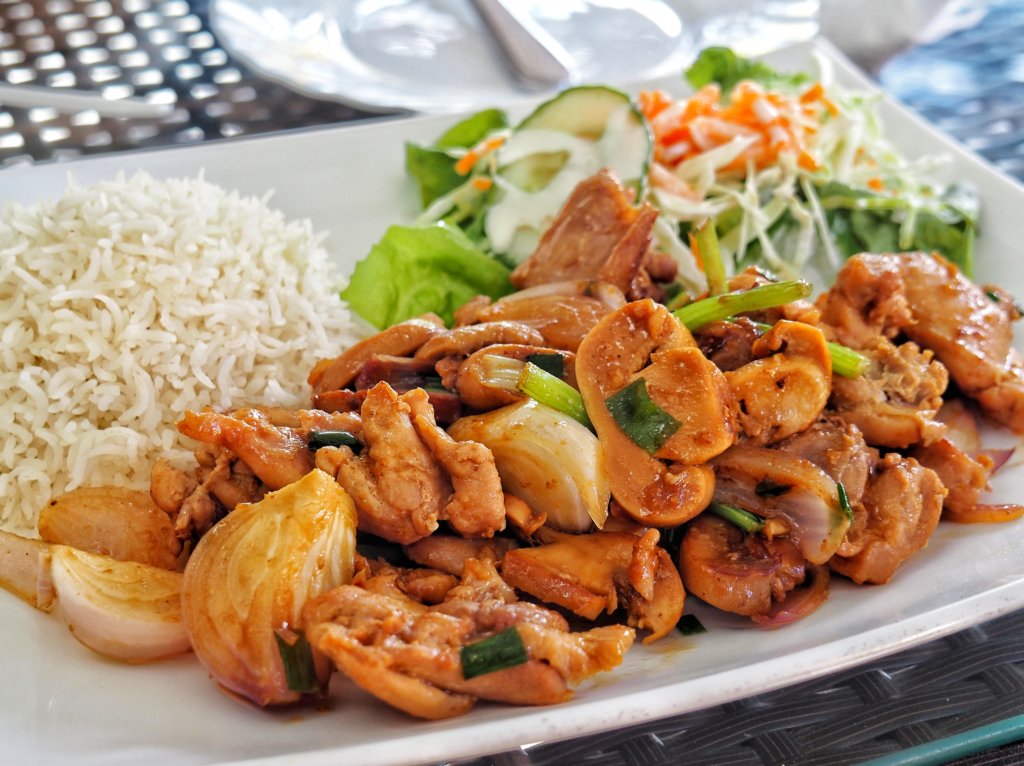 In Mauritius we not only cooked ourselves but also visited several restaurants, most of them in Mon Choisy, where we lived. 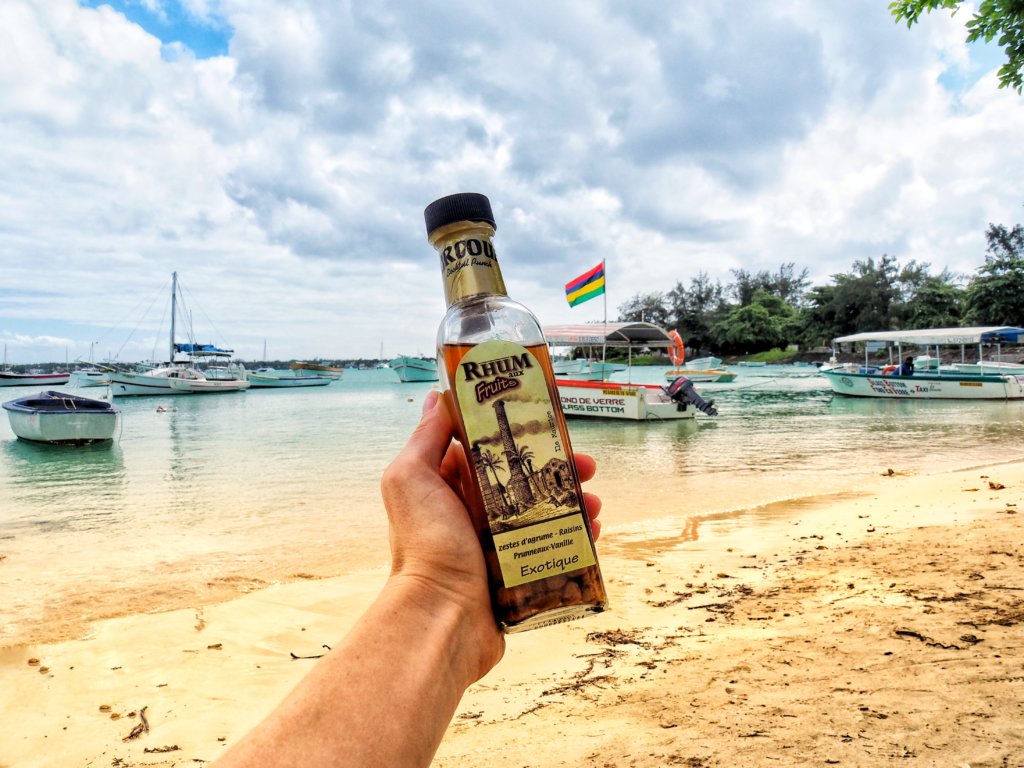 However, the best meal during the whole trip still was the home food –  self-cooked shrimps in garlic sauce with coriander sided by light-fried vegetable which I apprehended in the supermarket in a ‘’I don’t know who are you but I will eat you’’ way. (It turned out to be chouchou). All ingredients we bought at a supermarket: the seafood and fish is very cheap here. 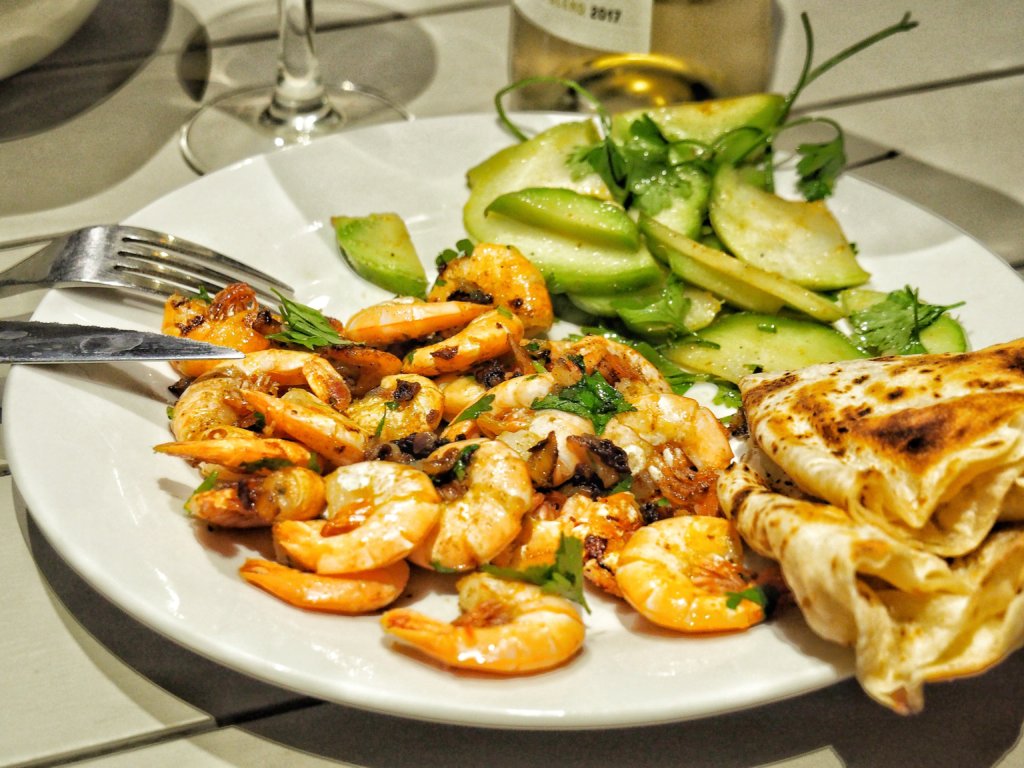 Since the arrival, I was searching for the sweet potato cake, which supposed to be the national Mauritian dessert. I was asking all around, at various stands at the Central Market in Port Louis, at the supermarkets, at the patisseries… During the search I tried a custard pudding cake, a weird Chinese sticky ball rolled in sesame (the seller persuaded me that it were the sweet potato cake – a lie!). Finally, I found the one I have been searching for at a small stand next to the Chez Popo Supermarket. Frankly speaking, I wasn’t impressed: the case is very small, fried and hard with some coconut flakes inside. The custard cake was much more delicious! 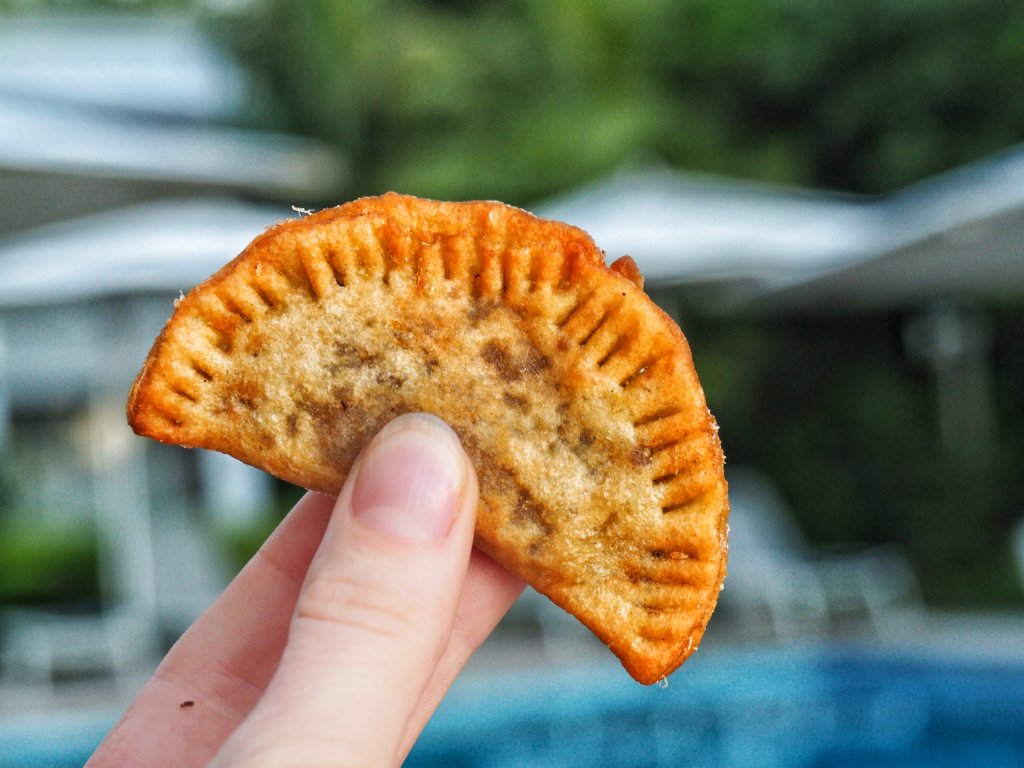 In the Northeast of the island the Botanical Garden Link is definitely worth a visit! I’ve never seen such a huge pond full of giant waterlilies. Their juicy green leaves can reach up to 3m in diameter and their flowers live only several days, turning violet from white and disappearing under water. Here, you can also admire the white and red lotus ponds, however, at the time we were there, there were almost no flowers left, only the seed boxes.

The entrance fee is 200 rupees pp. 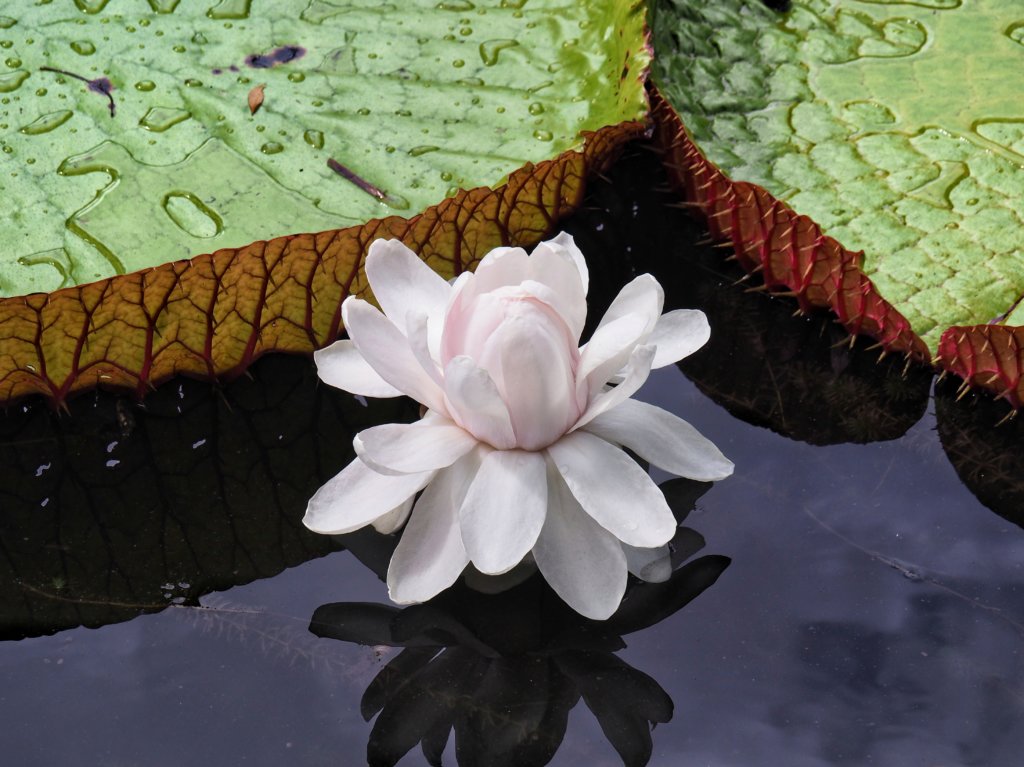 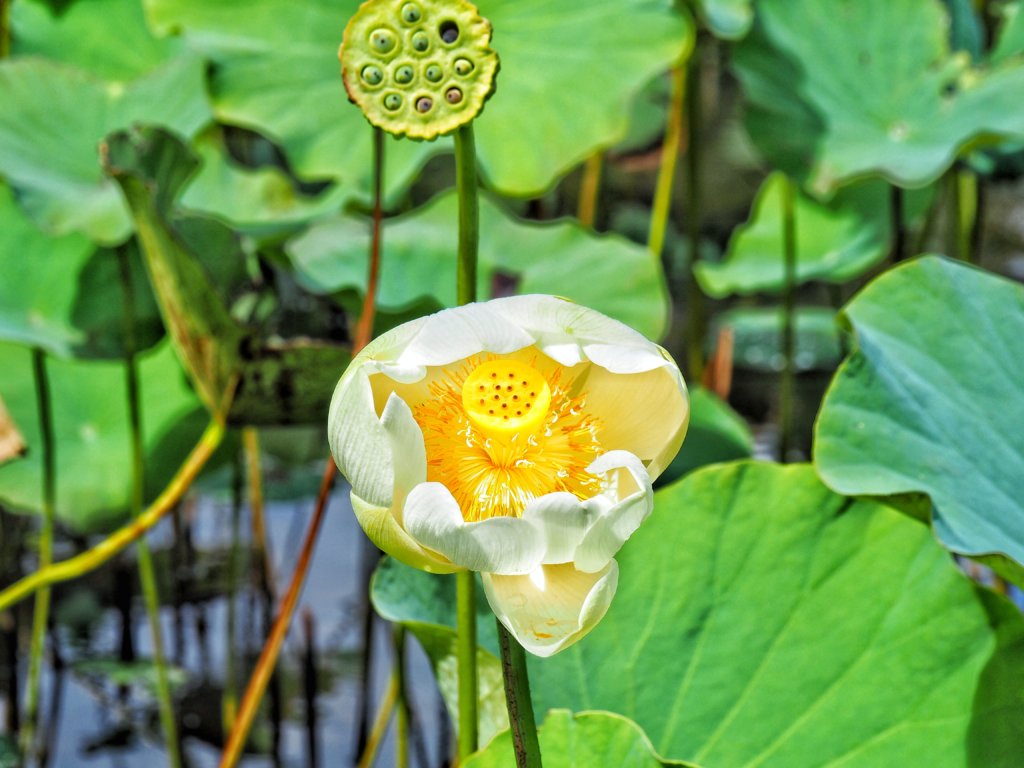 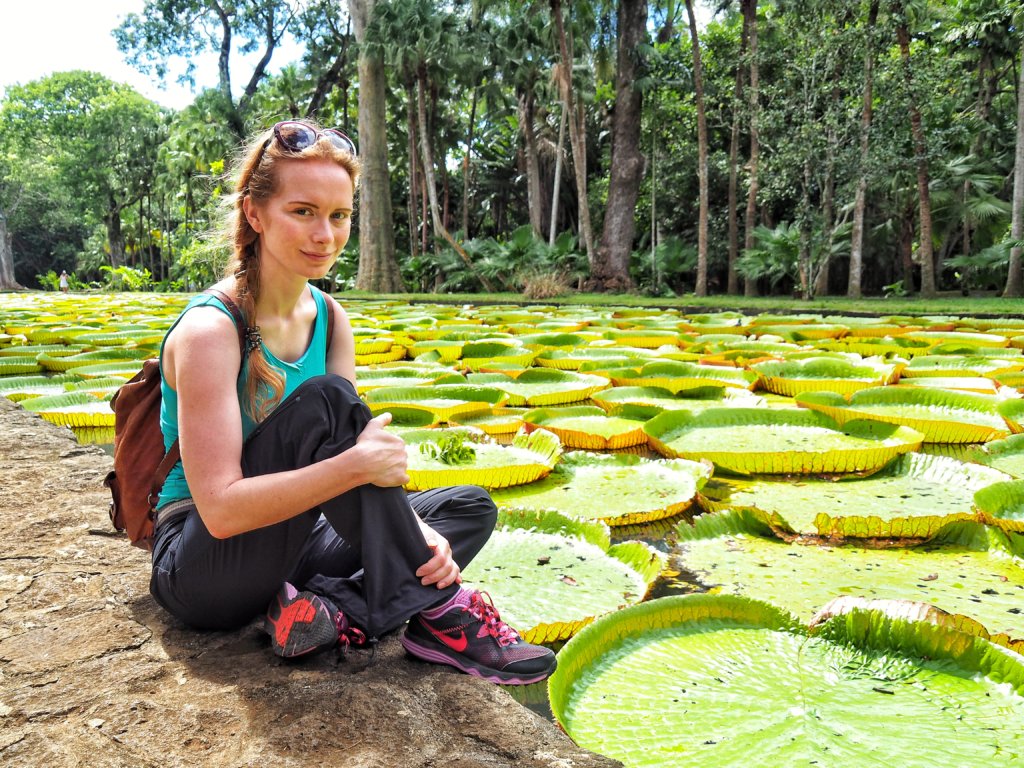 If you are keen on buying fresh fruit and vegetables as well as trying local street food and sweets, head to the Central (or Oriental) Market in Port Louis. This day, we were riding a motoroller and therefore couldn’t buy as much goods and greens as we would like to. 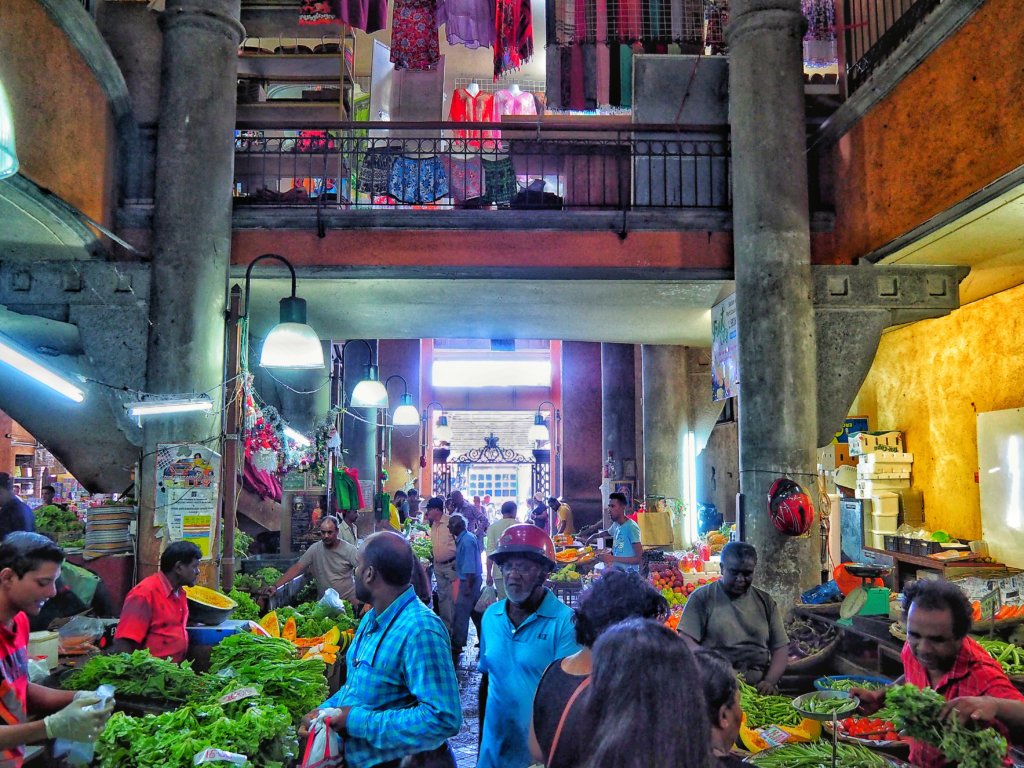 Higher in the mountains in the South of the island, you can visit Chamarel and its attractions: the Seven Colored Earth and Chamarel Waterfall for 225 rupees pp.

No one can precisely explain the nature of so many different colors of earth in this area, but most probably is that the soil is reach with iron, which is oxidized to different degree and therefore provides the intense gradient color.

On the top, you can try decent local coffee at the coffee-shop with the view to the colorful valley and afterwards take the stairs down to visit the giant turtles. 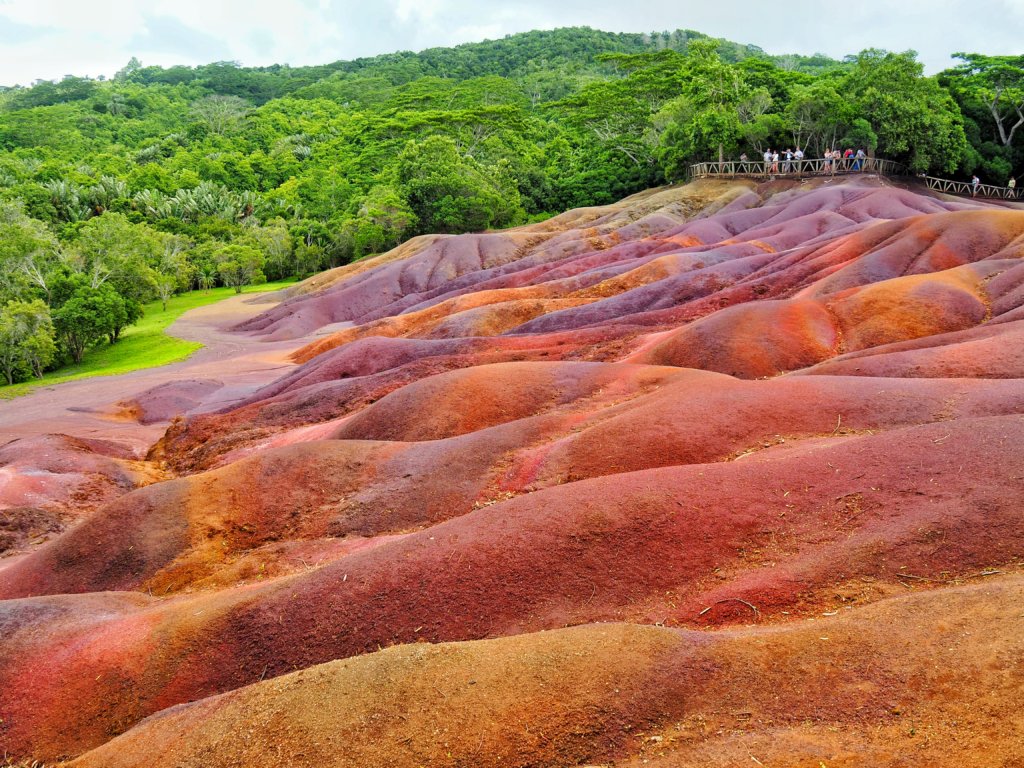 In the Northeastern corner, you can go for a short hike at the Bras D’Eau National Park. When we arrived there, at the parking a funny dog joined us and accompanied us the whole time during the walk in the forest. 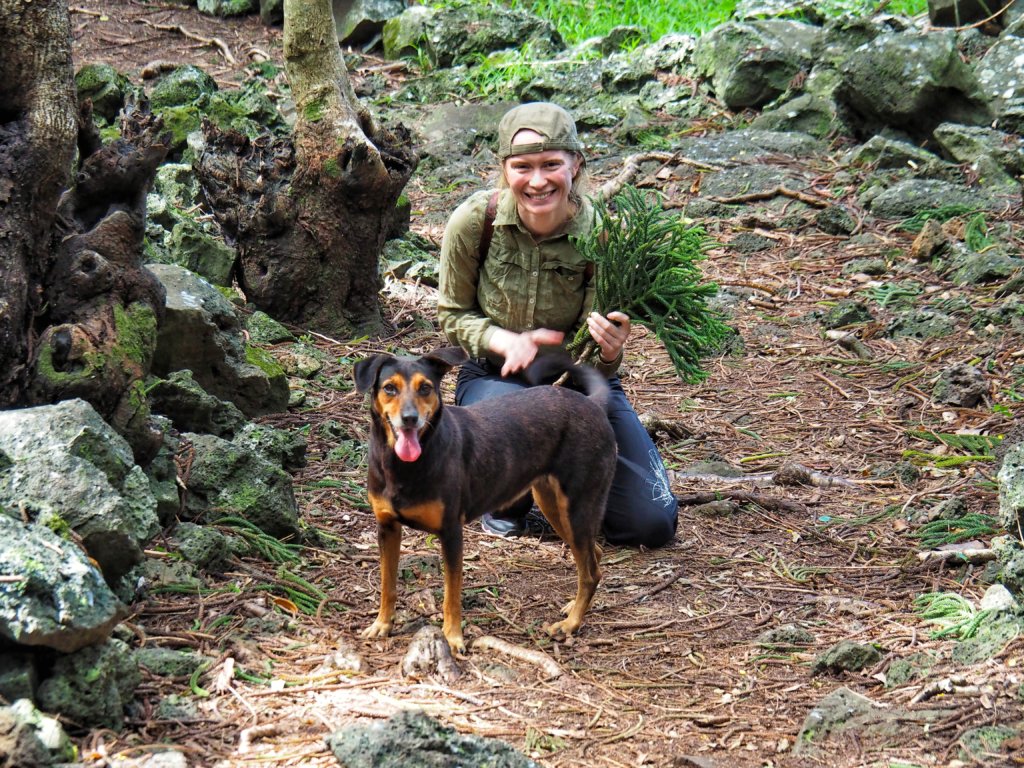 In the very North of the island you can visit a colorful small church in Cap Malheureux -Notre-Dame Auxiliatrice de Cap Malheureux – and enjoy the calm view of the ocean behind it.

After each trip we ask ourselves: would we come back here? For Mauritius it’s a yes, once we have children and are ready to spend much money for a wealthy vacation. For now we need more freedom and adventure! 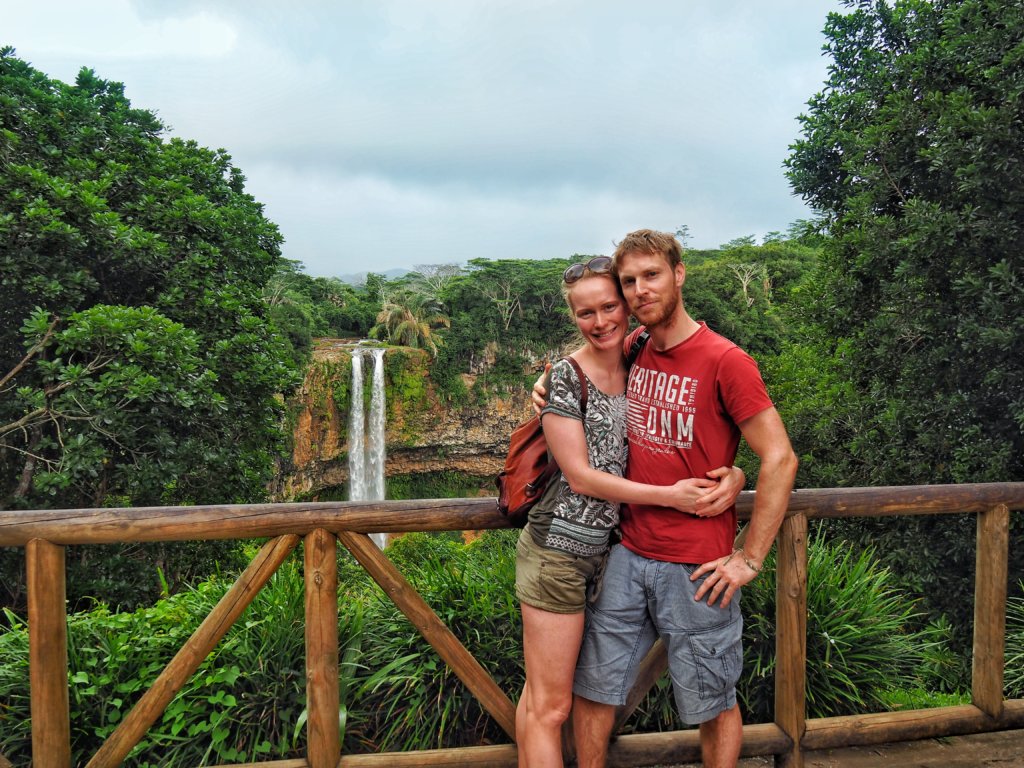