Previous Next
Easter holidays in Morocco. Part 2: from Marrakesh to Casablanca

Now the time is right to move to the second part of our little Moroccan journey, Marrakesh and Casablanca. 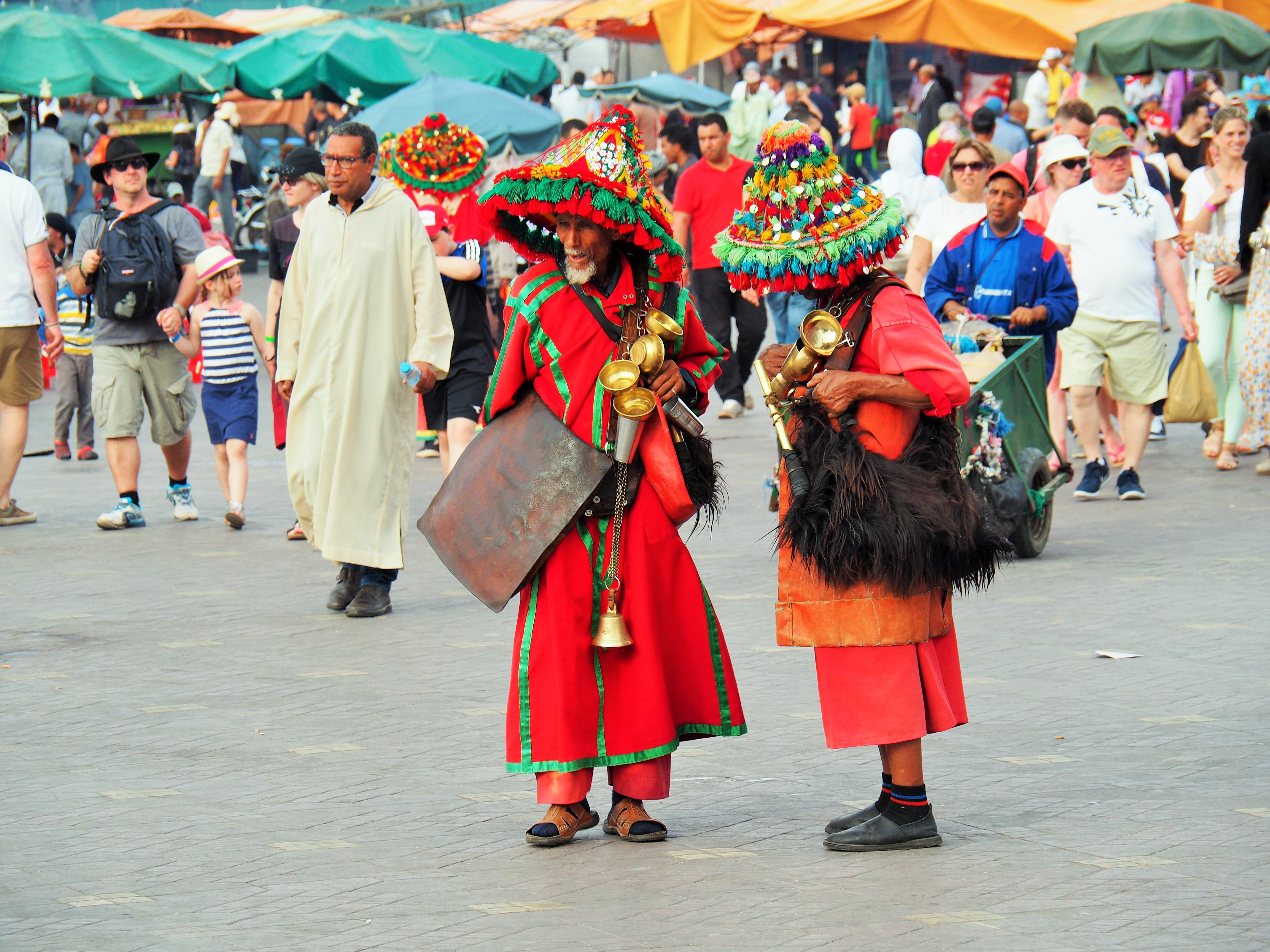 Musicians at the Jemaa el-Fna

From Essaouira, you can easily go to Marrakesh with a bus. We chose the Supratours (http://www.supratours.ma/en/), because their office was next to the medina and the departure of the next bus suited us. We booked the tickets just one hour before the departure and got the last two. We had luck, right? If you don’t have one, try it with the other companies, there are several others in the town. Ticket price fluctuates around 75 DH plus 10 DH for the luggage and the ride takes about four hours. The train station is 15-20 minutes ride from the old city. A taxi from there to your riad will cost you about 30 DH. 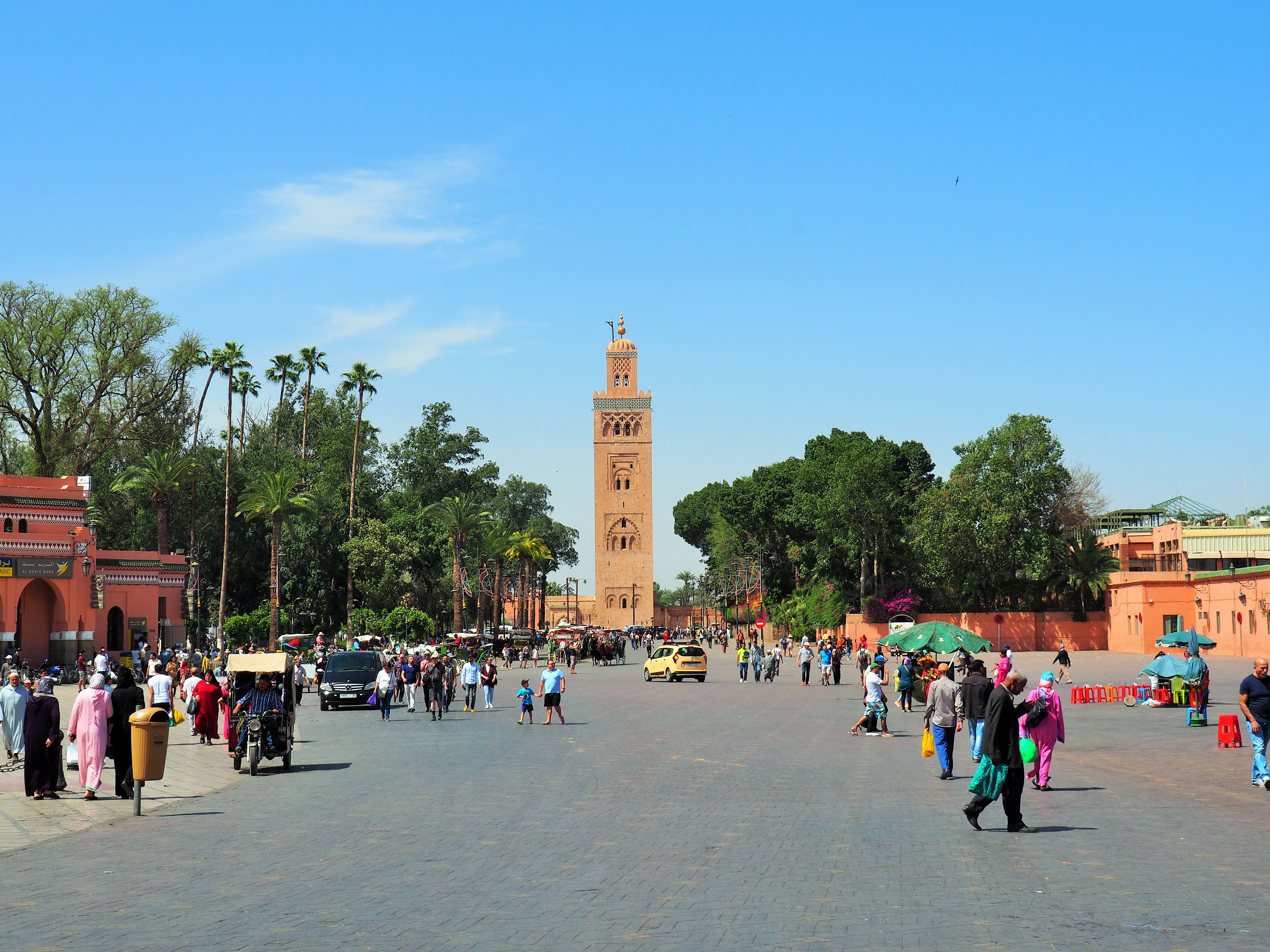 On the road in Marrakesh

Jemaa el-Fna, a bustling courtyard and market place. Snake whisperers, little monkeys in old dusty doll dresses, musicians, henna painters and of course crowds of tourists. Every second person tries to sell you something… This square is full any time of the day, buzzing and moving constantly. Drink your freshly squeezed orange juice for 4 DH, watch the people torrent and take care of your belongings. 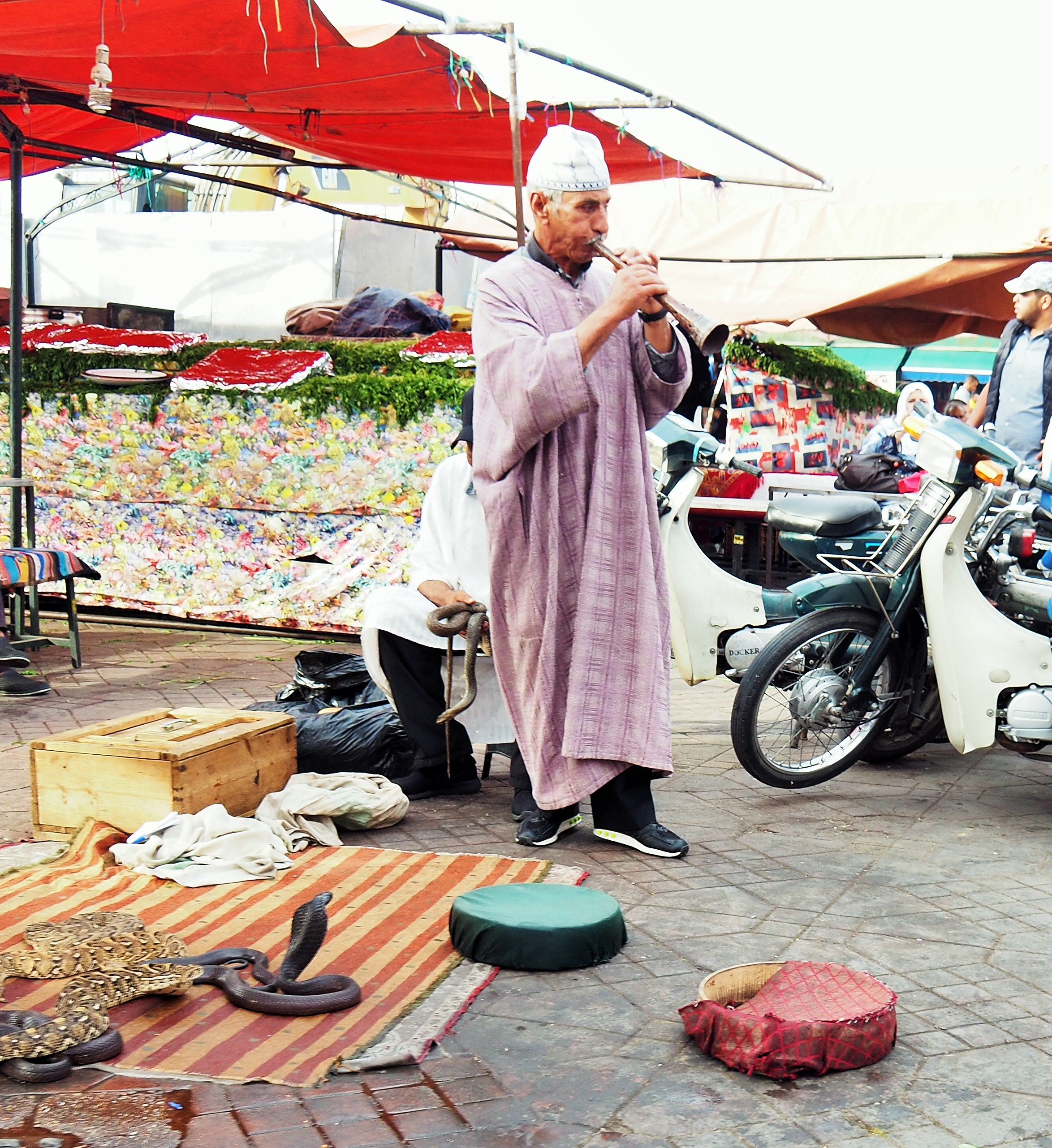 One of the must see places in Marrakesh is Bahia palace, a beautiful complex of old houses converted into the palace in the late nineteenth century. The best artisans and craftsmen of the country were working at this transformation and we can enjoy the results of their work for only 10 DH… This complex captures the essence of Islamic and Moroccan style. The palace carries the name of the grand vizier’s of the sultan wife. Marble, Arabic pattern tiles, beautiful geometry of stained glass: you will not regret your coming here. 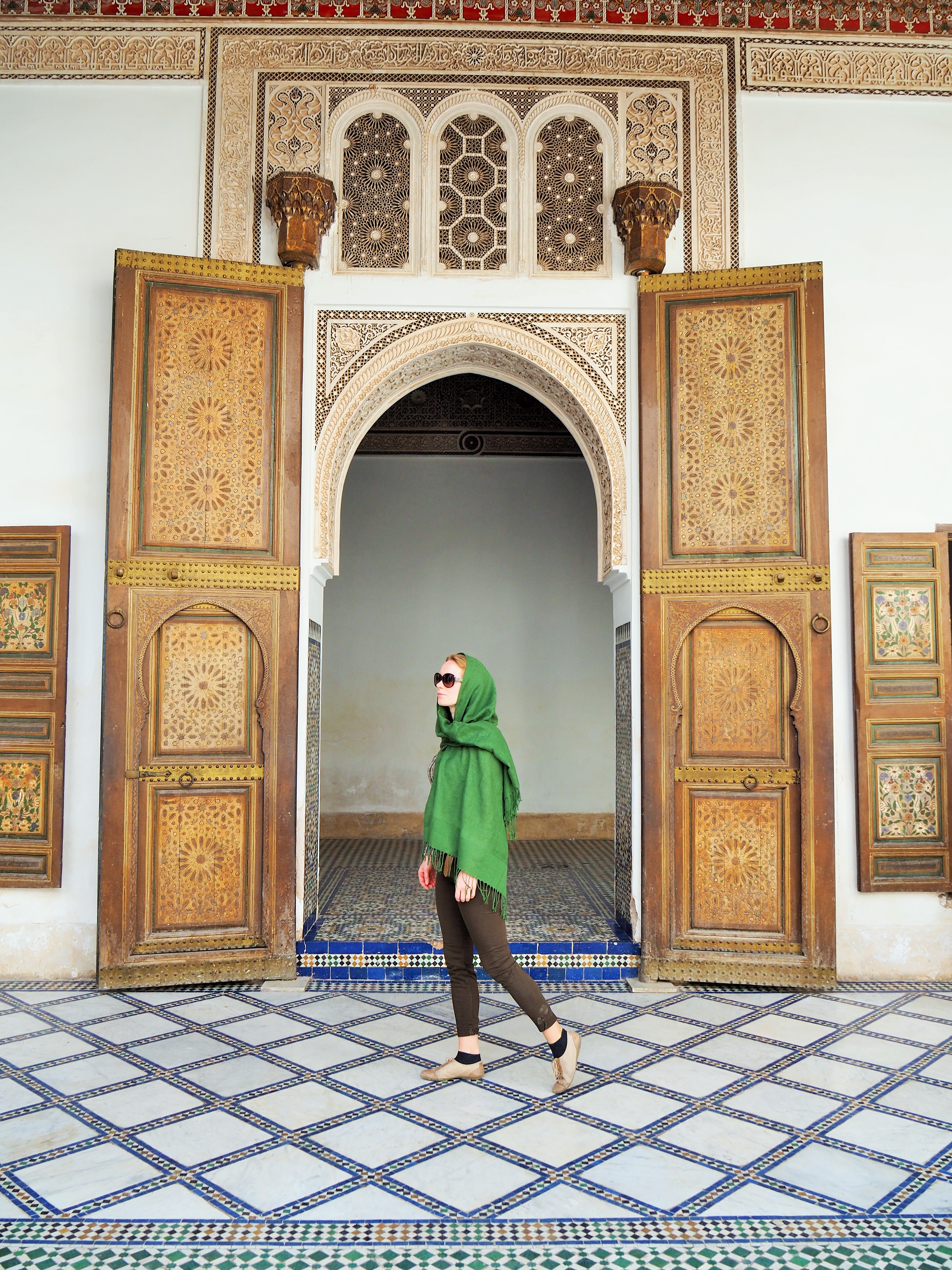 The complex possesses a big garden, two courtyards and two riyads. Though pretty crowded, it is significantly quieter than the bustling and busy medina outside… You can learn more about the history of the palace and its opening hours at its site: http://www.palais-bahia.com/en/. Oh yes, it was quite difficult to find the entrance to the Bahia palace: we were unwilling to accept the help of the people on the streets anticipating another veiled invitation into a spice or carpet shop. As a result, we were searching for the entrance for twenty minutes and I bet we walked one time around the palace’s walls. 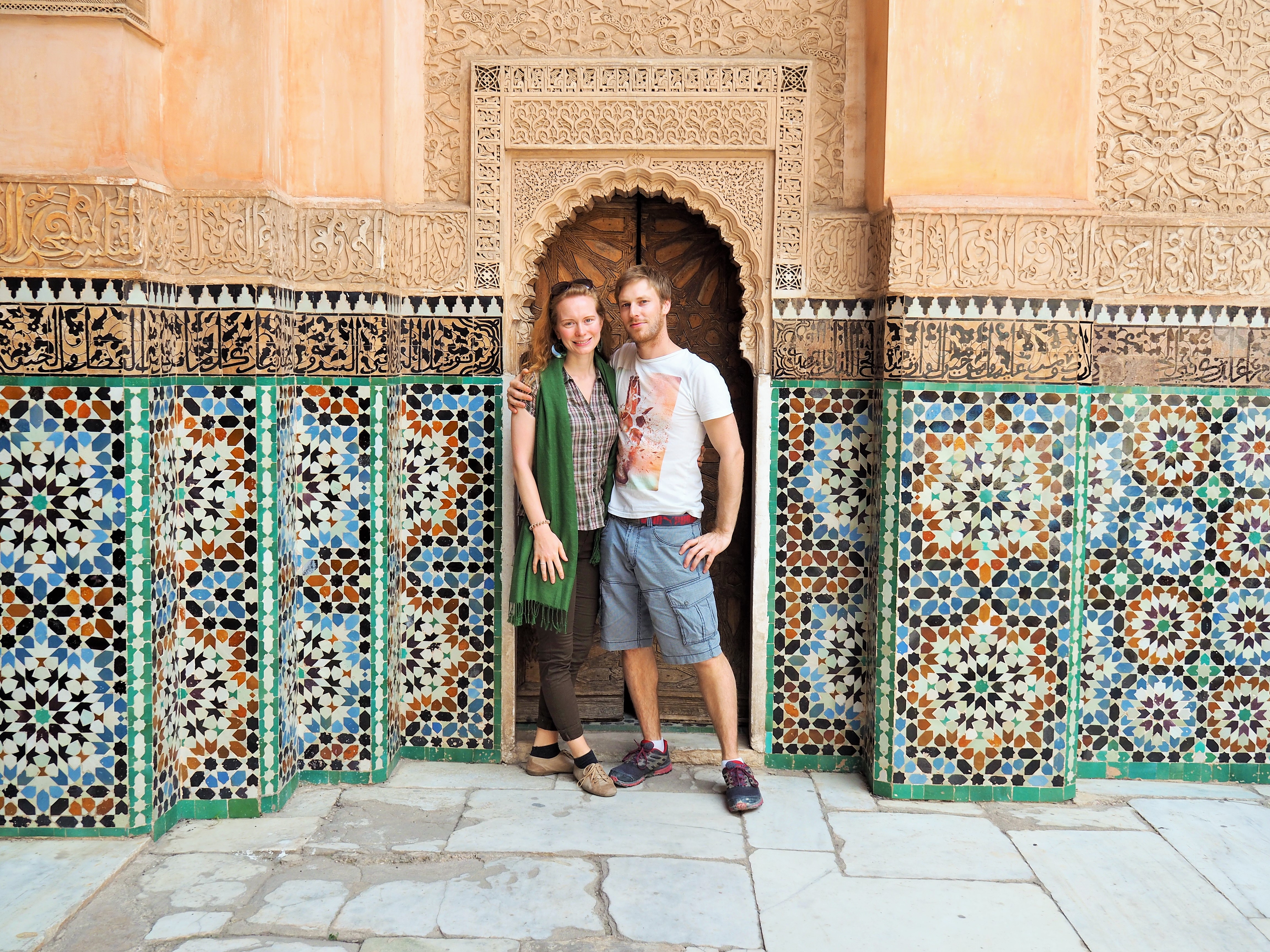 Another beautiful place with a character we visited and liked a lot was the Ben Youssef Madrasa. Situated next to Jemaa el-Fna, read: “very centrally”, the intricate 16th century religious college attracts much more tourists than the Bahia Palace. 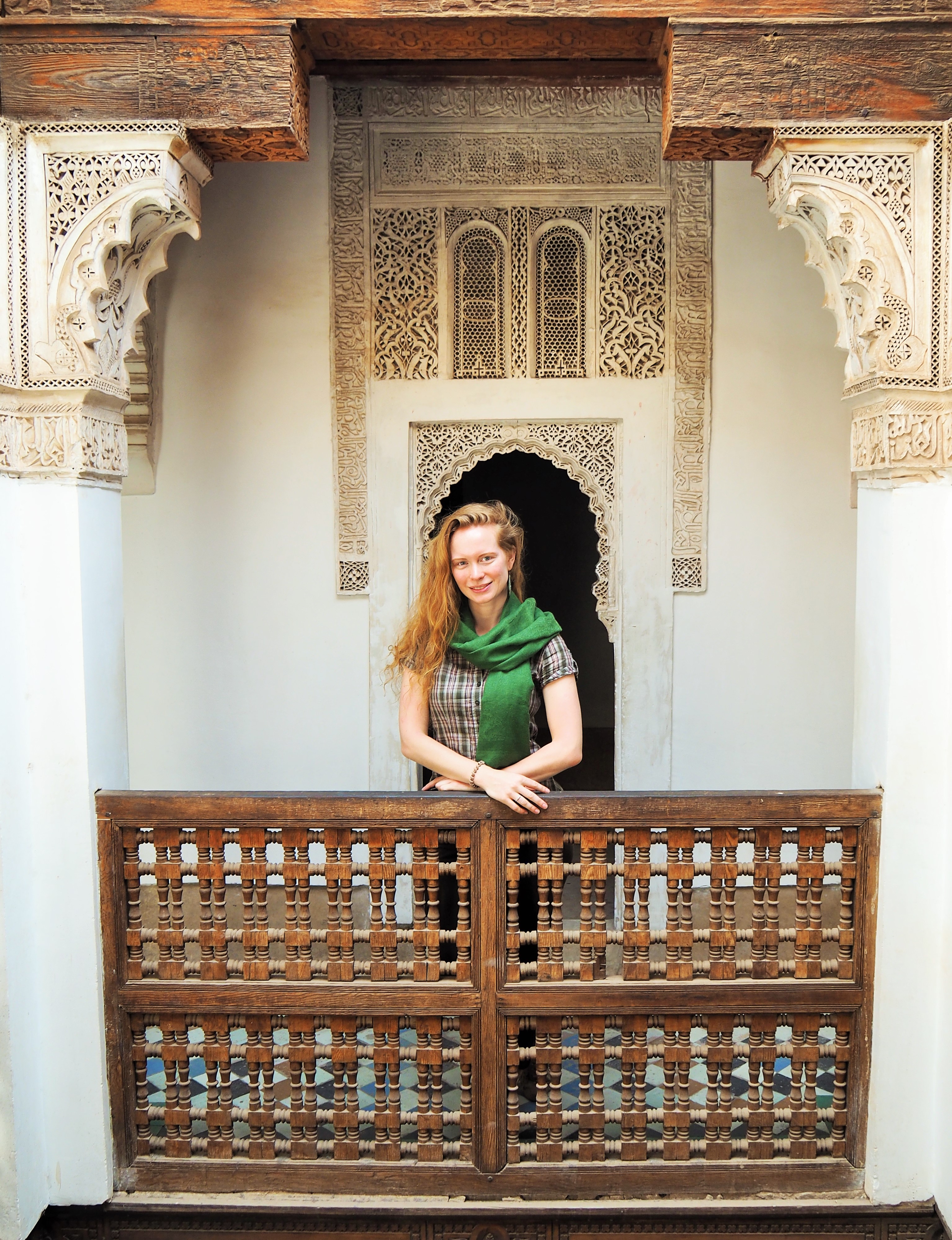 The walls are decorated with ceramic tiles and the windows with carved wood. You should follow the stairs to the first floor and visit the cells where the students lived in the past. Besides, from the little windows you can see the inner courtyard better… More information about one of Marrakesh’ famous architecture structures is here: http://www.medersa-ben-youssef.com/en/. 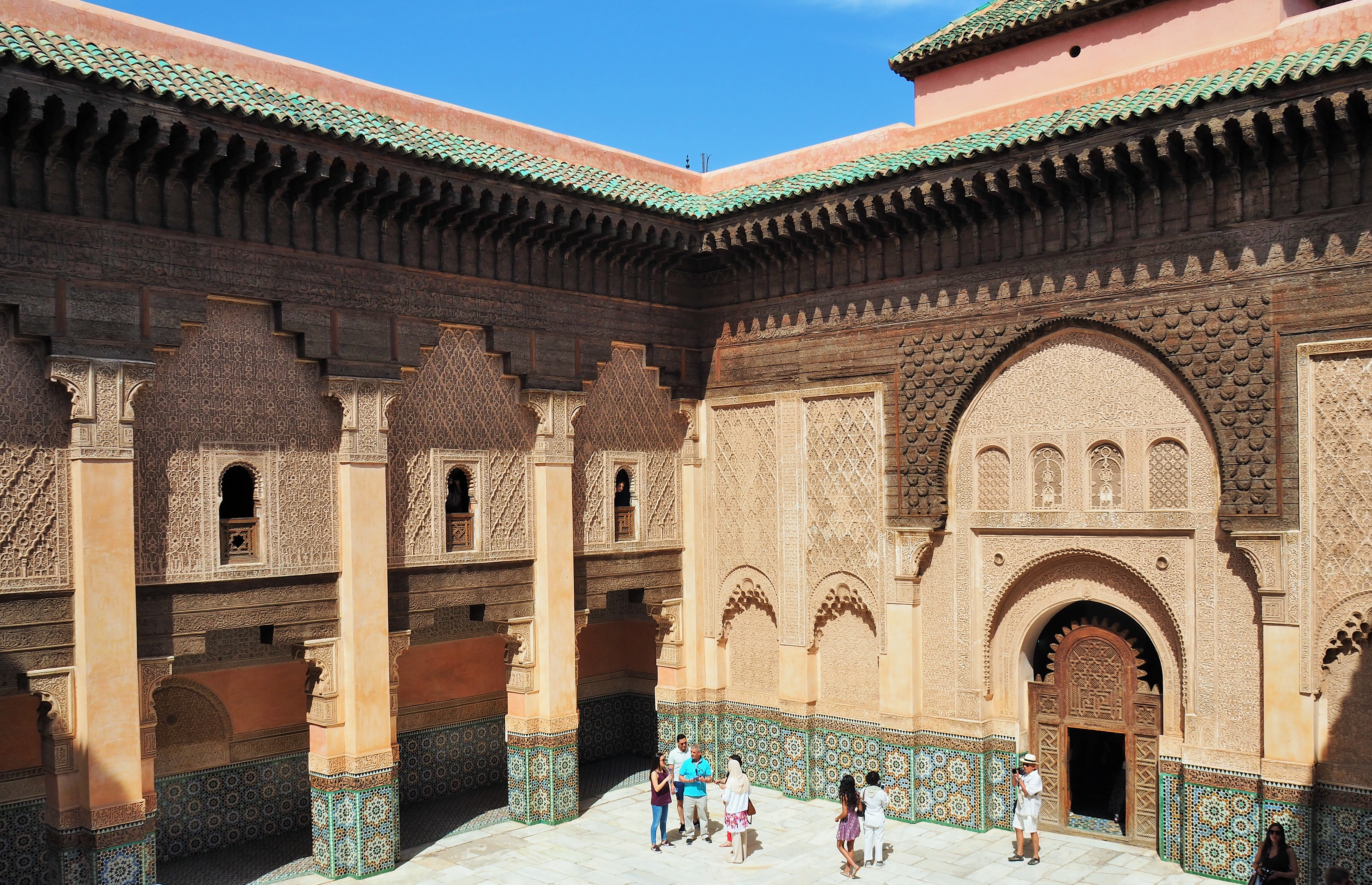 Local markets are one of the most attractive things to see in Arabic countries! In Morocco, markets are called souqs. A little warning: don’t get completely distracted by the unthinkable variety of goods, the motorcyclists drive through pretty often and sometimes pass very close to you. They even do not reduce their speed. So please, stay vigilant! 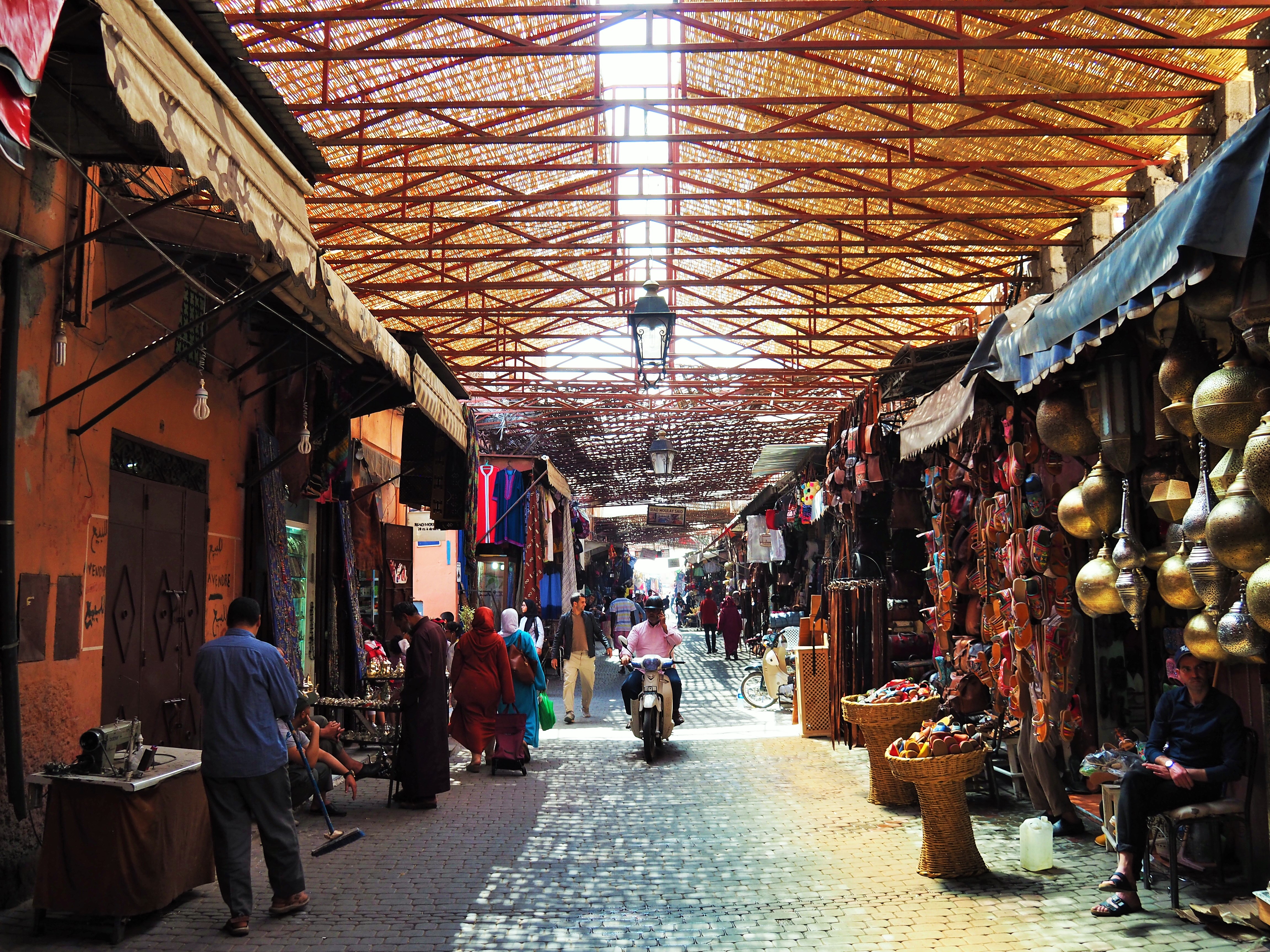 Attention, now follows very important and very secret information for your visit of the market. From a confidential talk with one of the spice sellers on the market, we learned a trick for more successful bargaining of the price – “talk to the salesman first”. We tried once and it worked – entering the shop on your own and going directly to the seller. If anyone other than the salesman “brings” you to the shop, the seller has to pay him a commission which automatically makes the prices higher. 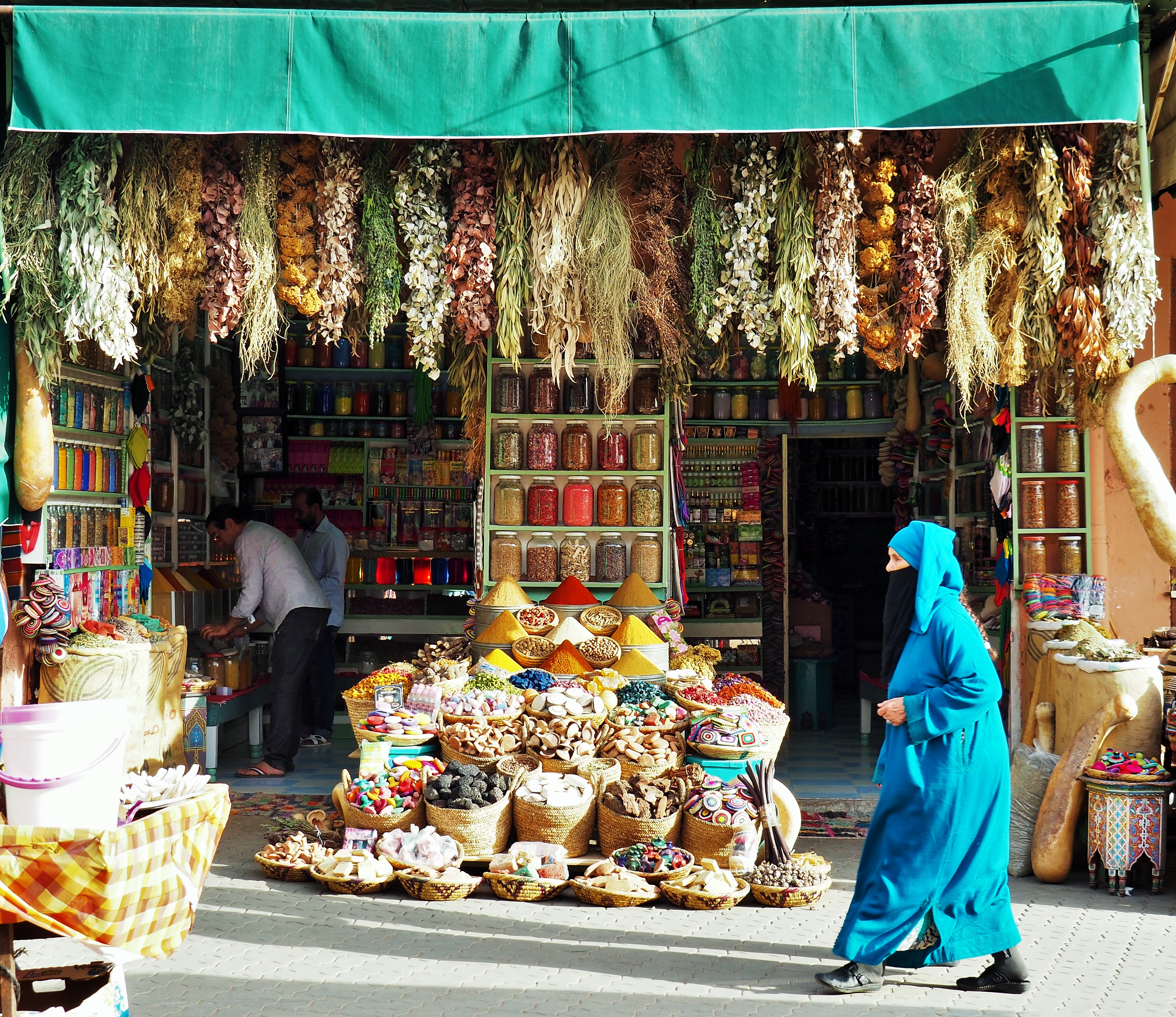 On the road in Marrakesh

Almost everywhere are little shops where you can drink herbal or fresh mint tea. Moroccans add a lot of sugar in it! Another delicious staff to try – almond or peanut paste. It is often produced right in front of your eyes, with a use of a machine or manually. 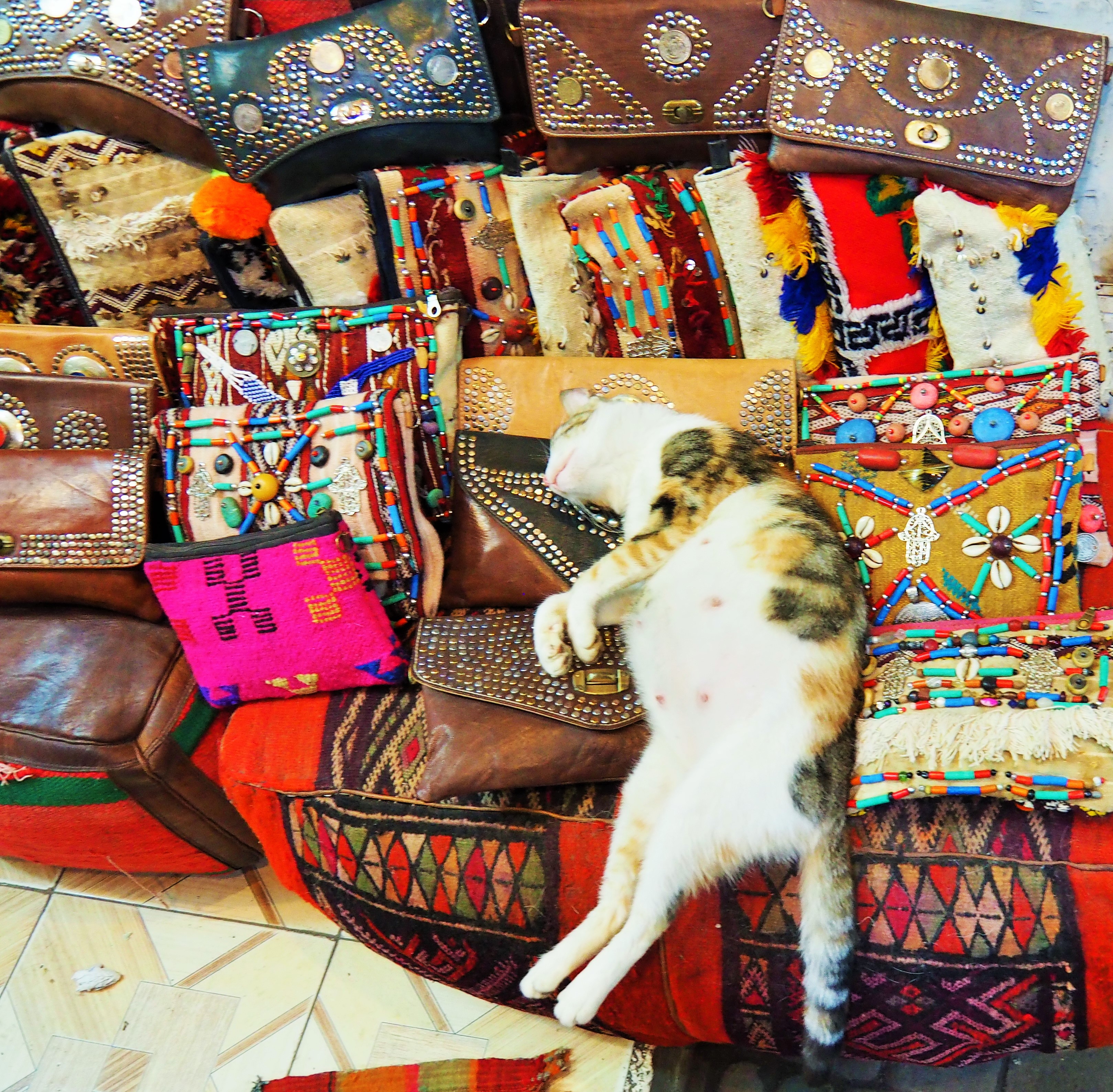 In Marrakesh, I was still coughing. It was nasty and nerving, so I decided to go for traditional medicine and bought very special spicy honey. 90 DH for 50 g – the most expensive honey I’ve ever bought in my life and, it turned out, the most effective. It really cured my cough! Okey, okey, it may be wishful thinking, but the coughing indeed significantly reduced.

In the same shop, we bought the famous Moroccan saffron. 1g of saffron will cost you between 25 and 50 DH on the market (you remember the “talk to the salesman first” rule?) and a fix price of 40 Dh in the shop. You have to pay attention to the smell and to the color. The smell shall be clear and delicate, the color- red with a few yellow fibers. From the salesman we knew found out that the best way to store saffron is in a glass bottle. Before returning to this shop, we bought a little glass bottle for 2-3 g of saffron on the market for 15 DH, and I tell you, saffron looks beautiful, so airy and exotic, in it.

The third thing we bought in this shop was the mix of 40 spices for couscous. It was freshly grinded in front of our eyes and smelled wonderfully.

If you decide to drop by, the name of the shop is “Biomedica” (www.biomedica.ma 37 Rue Touareg, Marrakesh, Morocco) and they have several affiliates in Morocco. 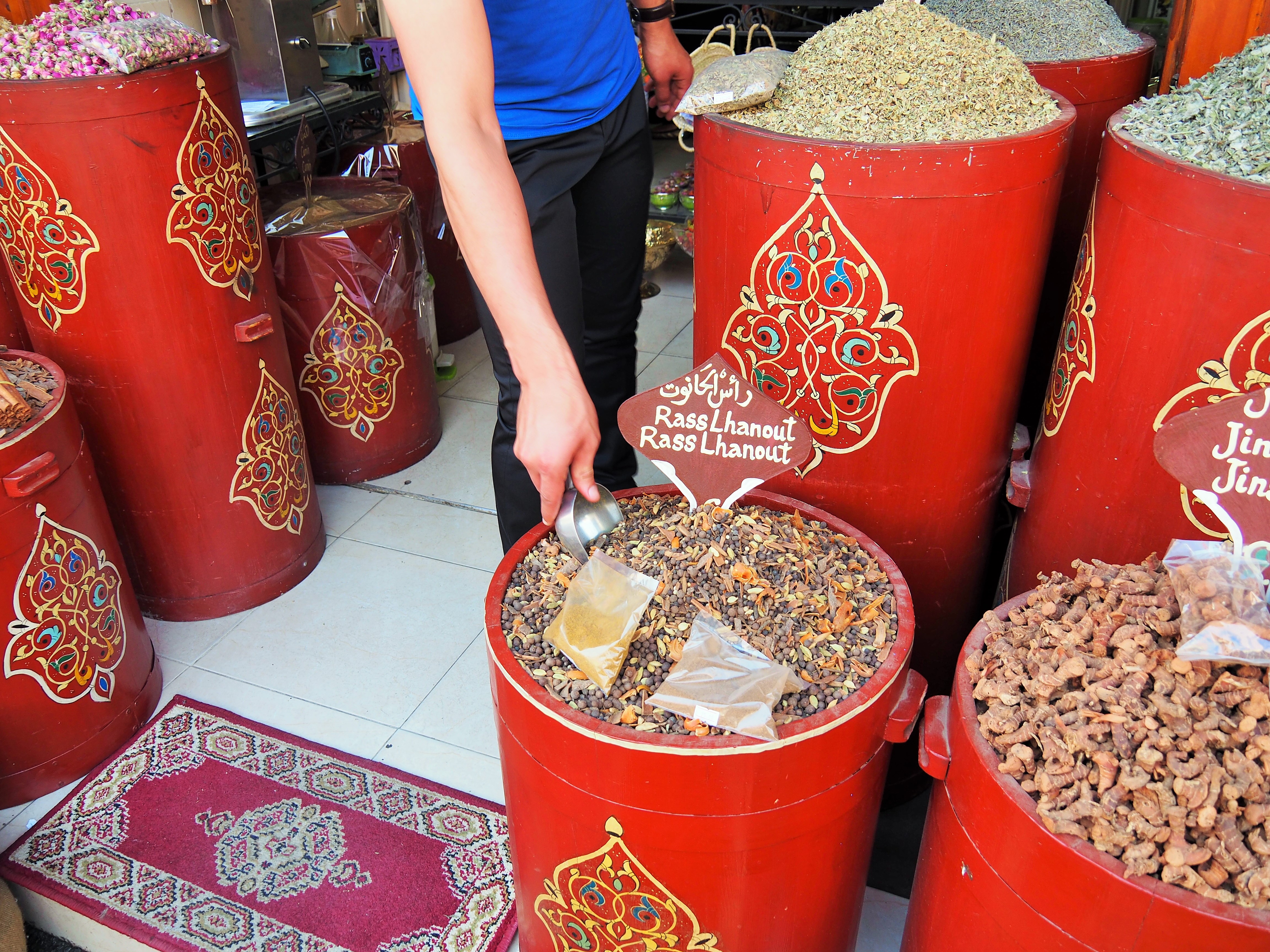 If you are travelling from Marrakesh by train and have some time for a snack, drop by in a café next to the train station called Café residence Marrakech (214, Av Abdelkrim Khattabi, Gueliz, Marrakesh). Try taboule salad and their freshly made citronades. The place is very simple, but there is a terrace, the food is tasty and the prices are very attractive.

As you already understood, we took a train from Marrakesh to Casablanca (Casa Port or L Oasis): for a decent change of the transport means and out of curiosity. The timetable can be found here: http://www.marrakechtickets.co.uk/morocco-rail-timetables/marrakech-to-casablanca/ and the tickets (90/140 DH) can be bought at the train station in the vending machines, which accept only cash (there are several bank affiliates in the building of the station where you can extract money). Beware, because of the ongoing construction works at the route, the 15 o’clock train takes more than 4 hours to reach its destination. We didn’t have much luck with the air-conditioning as well, it was simply didn’t working in our carriage, therefore the trip was not as pleasant as we expected it to be…

In Casablanca, a place definitely worth a (guided) visit is the Mosque Hassan II, a huge, spacious, beautiful mosque that impresses with its size and character. Thoughtfully built during seven years (mostly funded by the public donations), it was finished in 1993 and appeared to be one of the biggest mosques in the world. It is really huge! 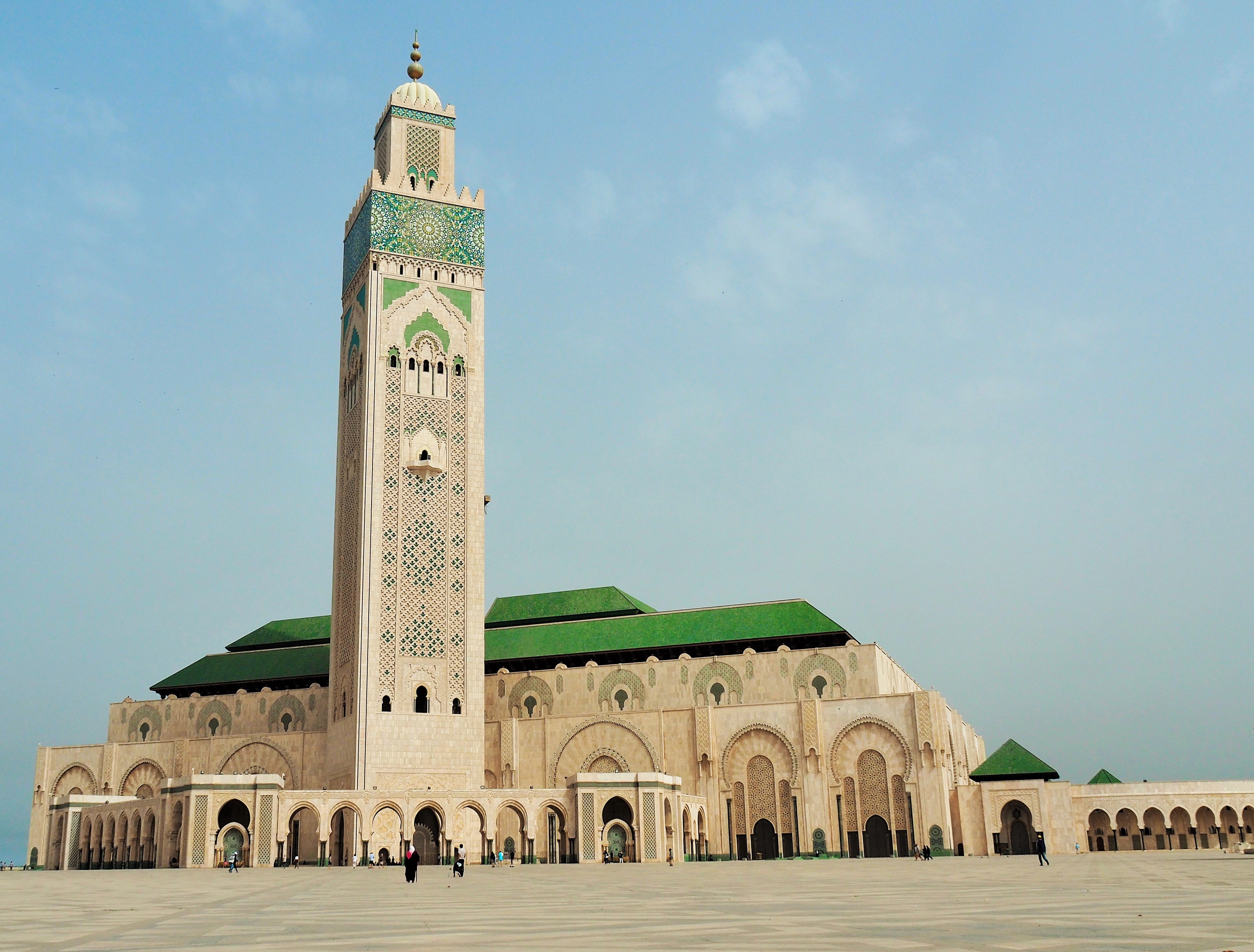 When we were walking inside and around, we were persuaded it was the third biggest, however, Wikipedia debunked our belief. In fact, it is only the 13th largest mosque in the world. However, this new gained knowledge does not decrease its size and scale and our impression of it. By the way, its minaret is indeed the tallest in the world. Usually, the tours (the price is 120 DH) start at 9 am, 10 am, 11 am, 2 pm and last about 1 hour. We had luck with our guide who spoke perfect English and told us a lot not only about the building, but also about Moroccan day-to-day life. 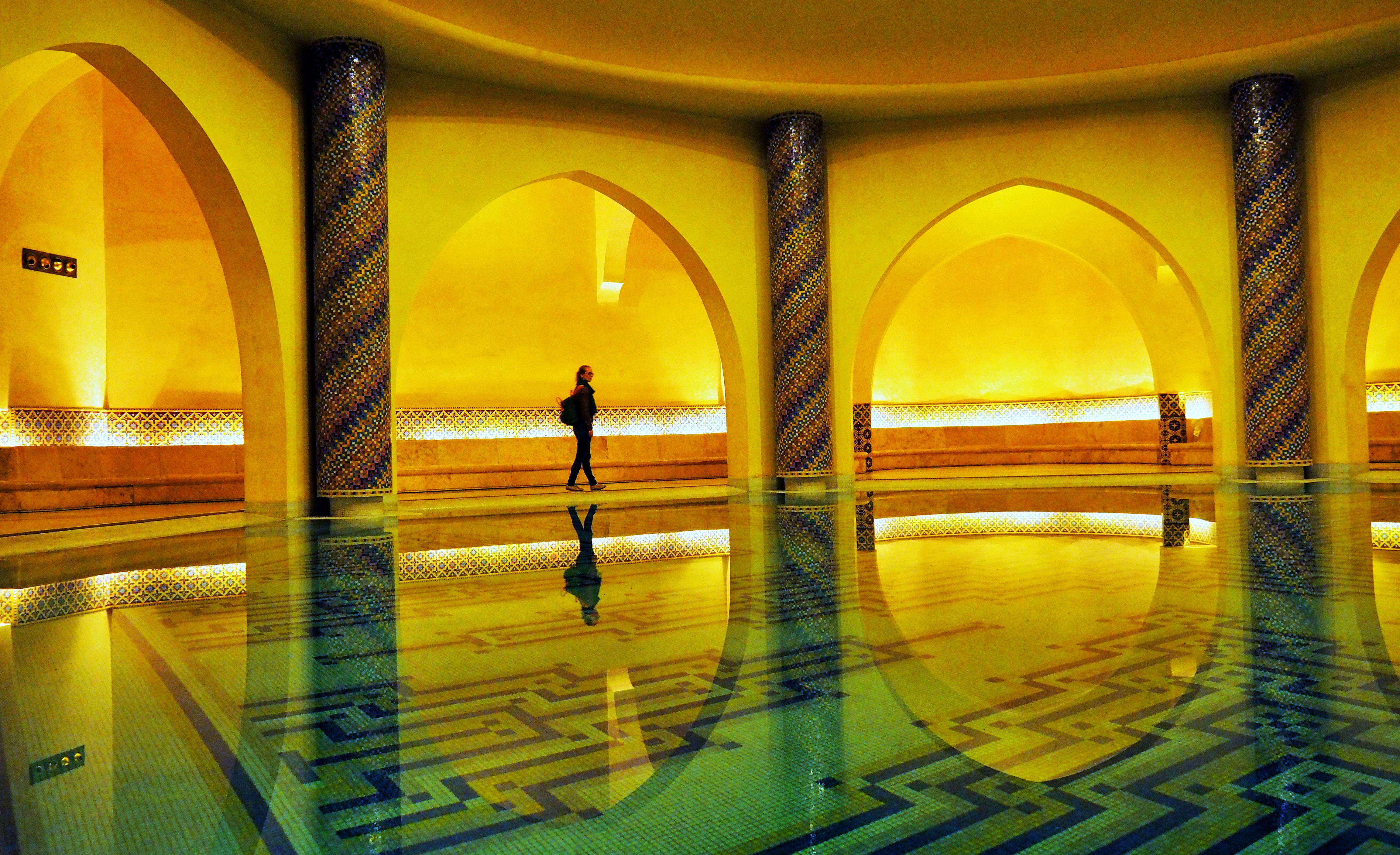 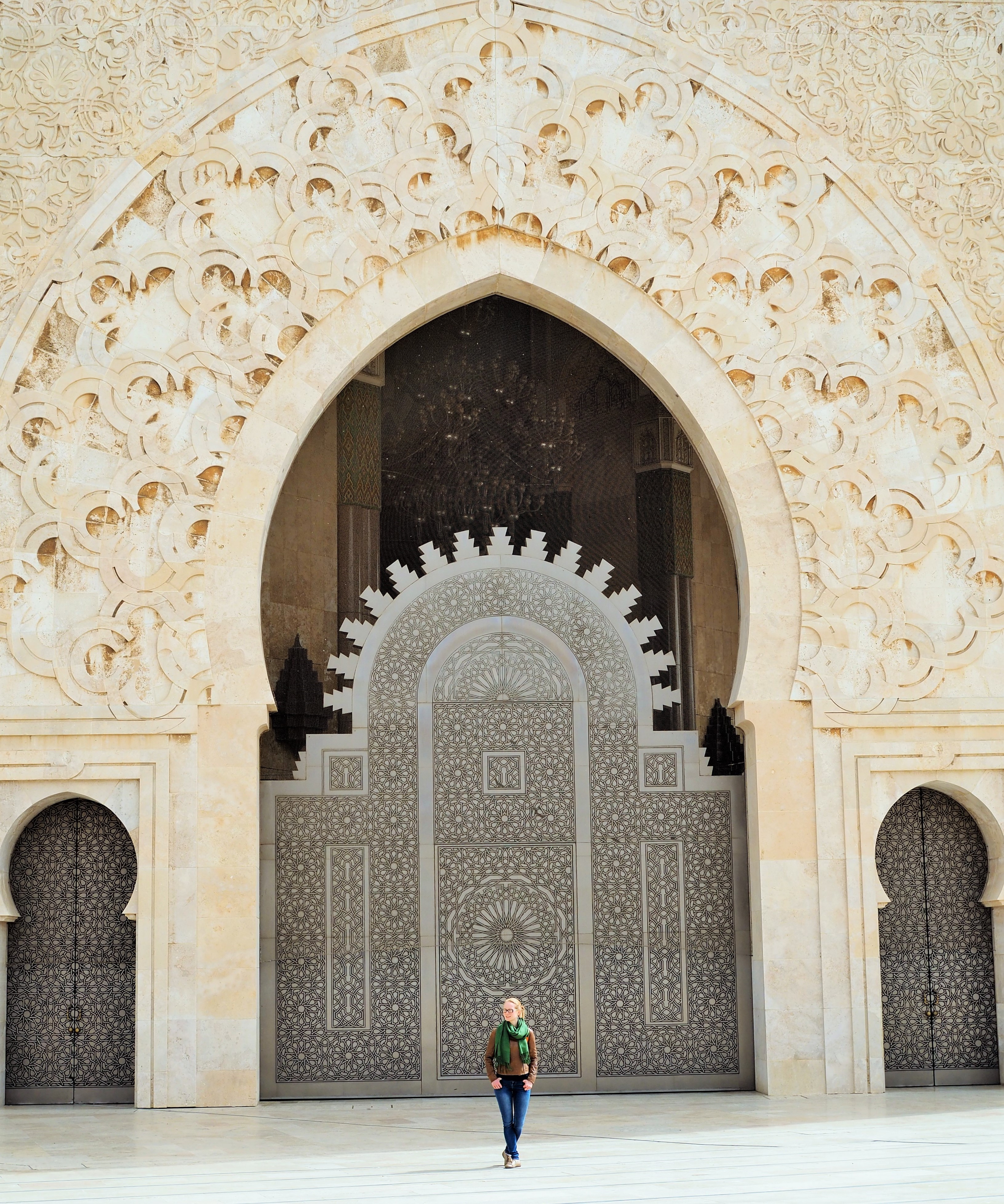 It is pretty easy to get around Casablanca – here you can find trams, cheap taxi (if you use taximeter!) and even Uber. However, it took us each time longer than we expected to get from a to b, especially to the train station, when our Uber driver did not know the way. By the way, you better do not hug your partner in publicity, we received a warning from the police and we still do not know if they mean it seriously or not… 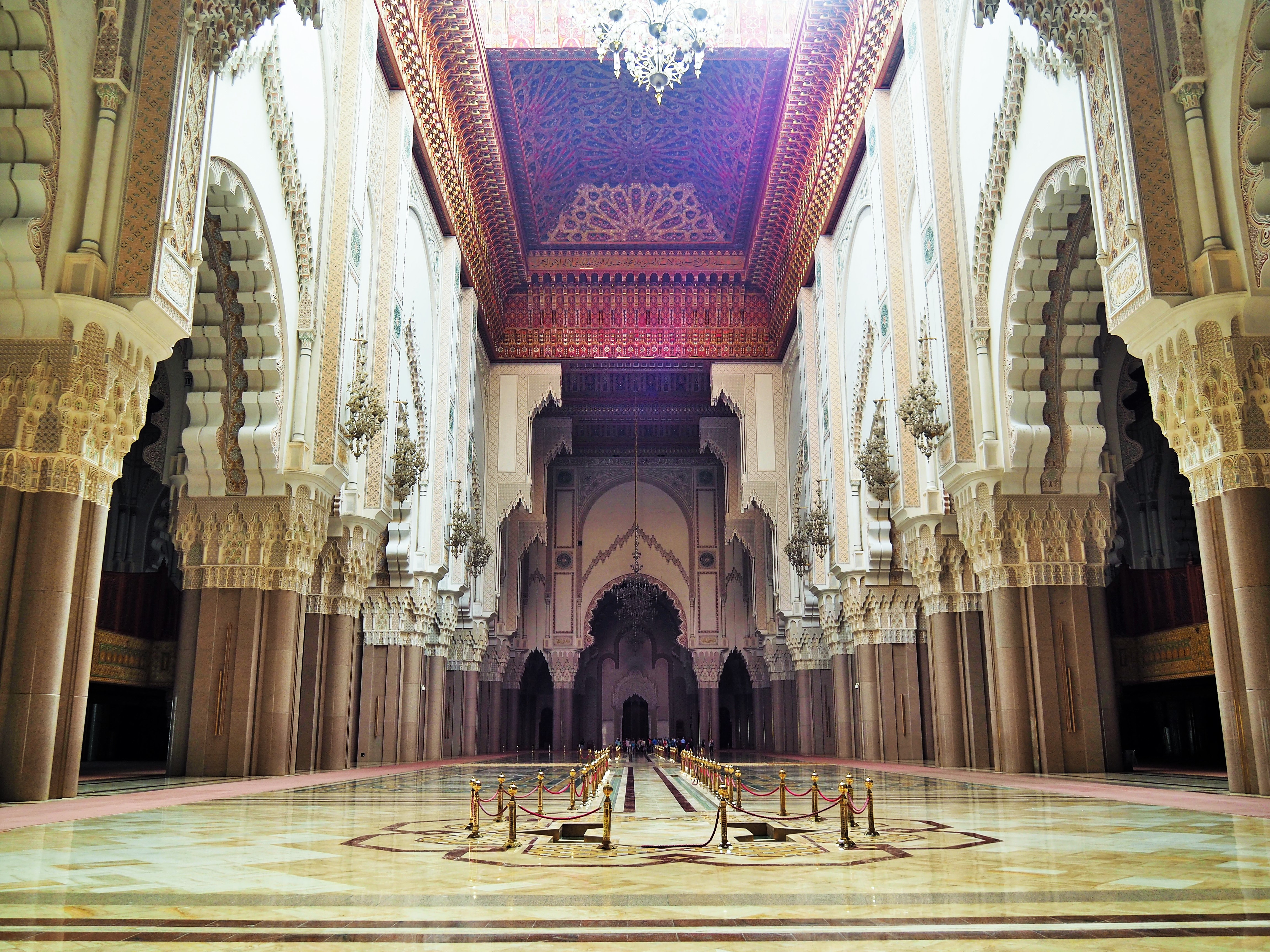 The easiest way to go to the airport from Casablanka is to take a taxi to Gare L’Oasis and then to take a train (43 DH one-way, departs every hour, more information here: http://www.oncf.ma/PrixEtReservation/Pages/BilletsNormaux.aspx). At the train station, you can buy tickets from the machines only in cash. If you are in a hurry, buy ticket on the train for a higher fare.

Our second trip to Morocco was as incredible as the first. I’m sure we will come back again, one day we come back again. Because I already have a plan. Stay tuned!

On the road in Morocco