Previous Next
Easter holidays in Morocco. Part 1: from Agadir to Essaouira

Last year we have already been to Morocco, but very shortly, only three days. That time we visited the northern Morocco and its three cities Rabat, Chefchaouen and Fes (A weekend away in Morocco). Many people told us afterwards that we were crazy, to travel so fast and so intense. However, this was a conscious decision: we travel so quickly in order to find the places we like the most to be able to come back there… Morocco was one of these places. So here we were, in Morocco, this time for 6 days and 4 cities on our itinerary: Agadir, Essaouira, Marrakesh and Casablanca.

We have flown over Brussels to Agadir and took a taxi to Tamraght (300 DH fix price). We planned to go surfing there and booked a surfers hostel in this little town. However, I got sick right before the trip and we had to reluctantly cancel surfing. Instead, we took a long walk along the beach. 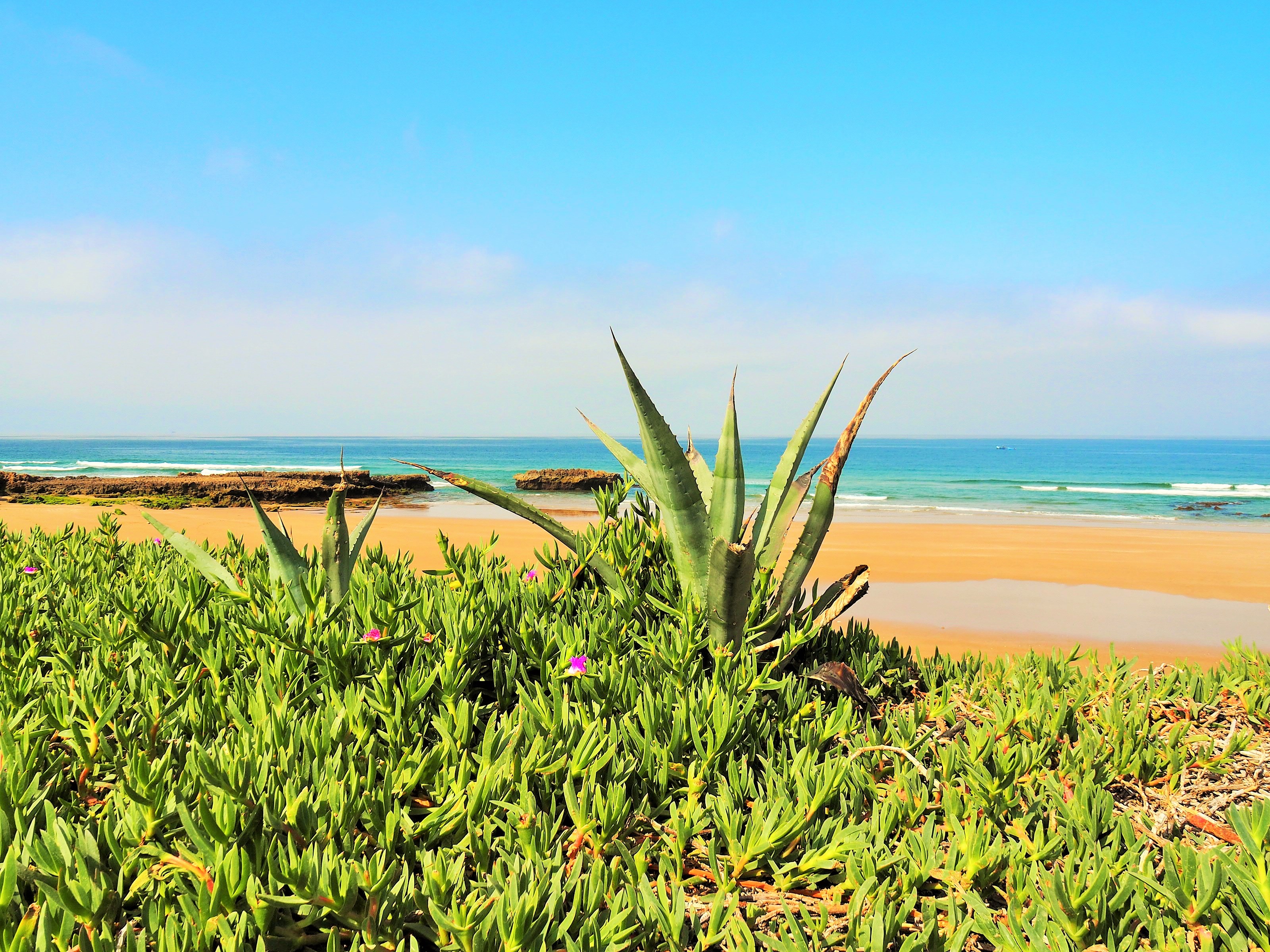 The Tamraght beach is huge and not so crowded at that time of the year. You only meet some surfer groups from time to time. If you are there, don’t skip this delightful walk!

Afterwards, we went exploring Agadir (a public bus drives there from Tamraght every hour and costs 7 DH). Our first step in this city was directly into… the tourist trap. While we were walking toward the souk (traditional Arabic market), a neatly dressed elderly man joined us and talked fluent German to us. He has shown us the shortcut to the market and we, still a bit jetlagged and melted in the heat, blindly followed him and ended up in a little (almost shabby) spice shop with a very scarce choice. The elderly man and the shop owner continued talking to us very quickly in German. In parallel, they boiled us tea, which was supposed to heal my cough, and wrapped up some herbs to take with. Afterwards, they prepared an inhalable solution. Then they wrote us their address and said that we have to send them a postcard from Germany. And then the bill came. 140 DH. 14 Euro for 100 g simple herbal tea! Isn’t it crazy? We found it shameless and agreed to pay maximum 50 DH (we didn’t have more money in case with us). They tried to insist that we go to the nearby ATM and withdraw enough money to pay us. We declined and said either we pay 50 DH or leave. They accepted the first option. From our side, we were happy to escape this shop and continue exploring the city on our own, not being seduced anymore by the sound of German language. Guess if the shop owner gets a postcard;) By the way, as we discovered later, the price for this amount of tea is max 10 DH on the real market. 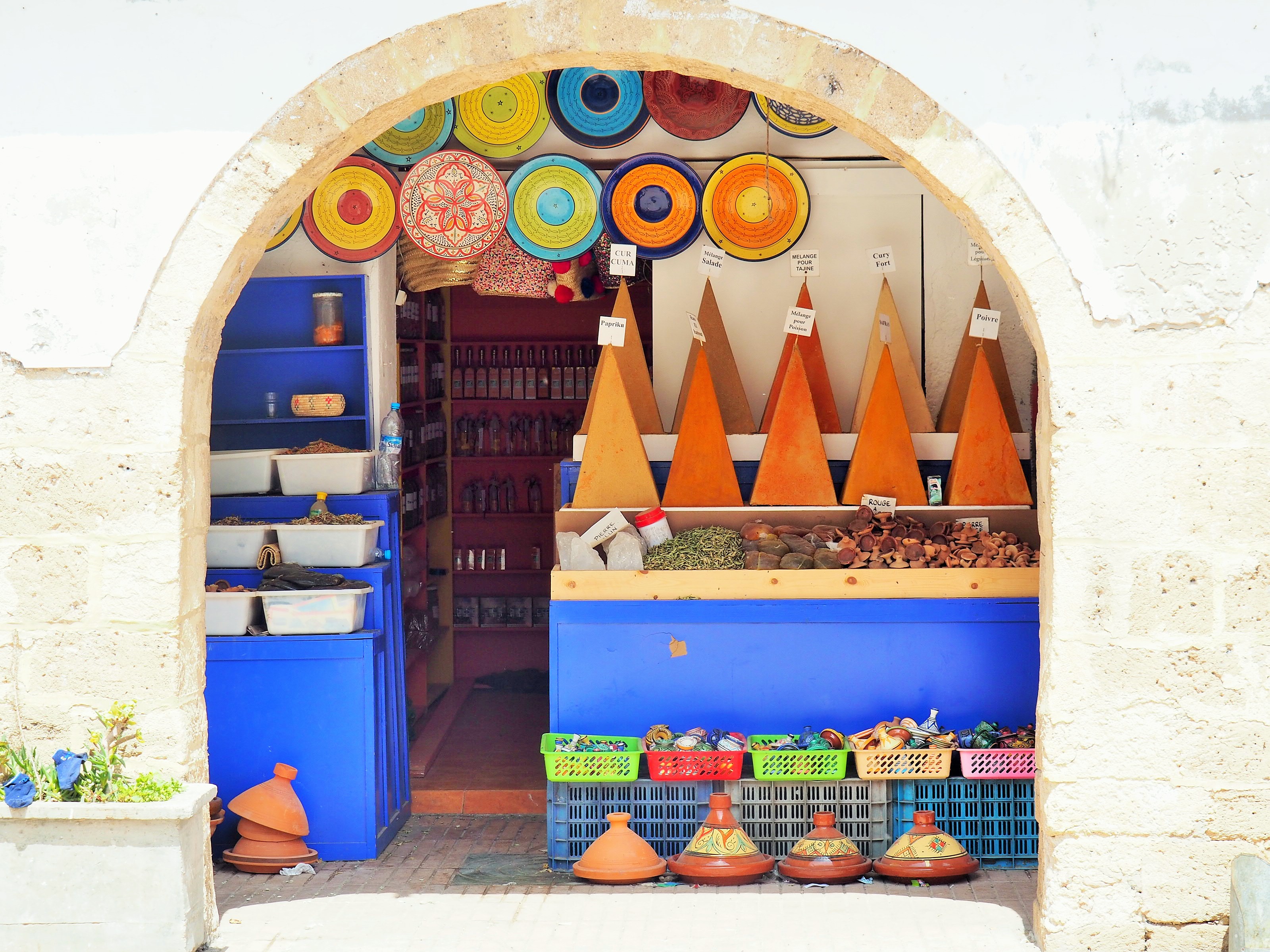 Another nice stroll awaits you in the Talborjt, a nice area without many tourists, where locals go shopping and have a lunch. Later, continue to the beach and then to the clean and chic Marina Agadir full of much more expensive hotels and more sophisticated shops and restaurants that in the city, everything exclusively for the wealthy tourists, as you see…

A useful tip for those who is pondering if it was possible to buy any alcohol in Morocco. It is possible, but for higher price than in Europe. In Morocco, every big city has at least one shop where alcohol is sold. In Agadir it is Uniprix http://agadir-uniprix.com/. Besides alcohol, you can find here a huge variety of local souvenirs for fair prices. Interesting thing: if you stay outside of the city, you can order a taxi to bring the stuff you need. Cool, ha-ha!

The souk in Agadir

The place where we stayed, the Blue Surf House (Hay Tissalouin Oubaha Tamraght, Tamraght Ou Fella, 80750, Morocco), deserves additional attention. A little villa with two open air terraces and relaxed atmosphere welcomes surfers and travelers all-year-round. The hosts are very friendly and helpful. Delicious breakfast is served every day (3 Euro) and dinner five times a weak. We enjoyed a fish barbecue and board games and some dancing in a funny group of surfers.

The ride to Essaouira was quite easy to organize. We just went to the main road and hailed a shared taxi. It took us 10 minutes to catch one. We negotiated the price of 60 DH pp and after 3,5 hours drive were in Essaouira. However, a shared taxi could be a little bit extreme for those who demand high comfort and safety of the ride and I will tell you why. In a car, which usually accommodates up to 5 persons including a driver, easily fit 7 people. No seat belts available and during the whole ride very loud Moroccan music will supposedly play if your driver is an elderly man. A cherry on the cake will be the fact that the roads can be partly very narrow and extremely winding. However, I assure you, we arrived safe and sound, though somehow bored of the monotonous music. 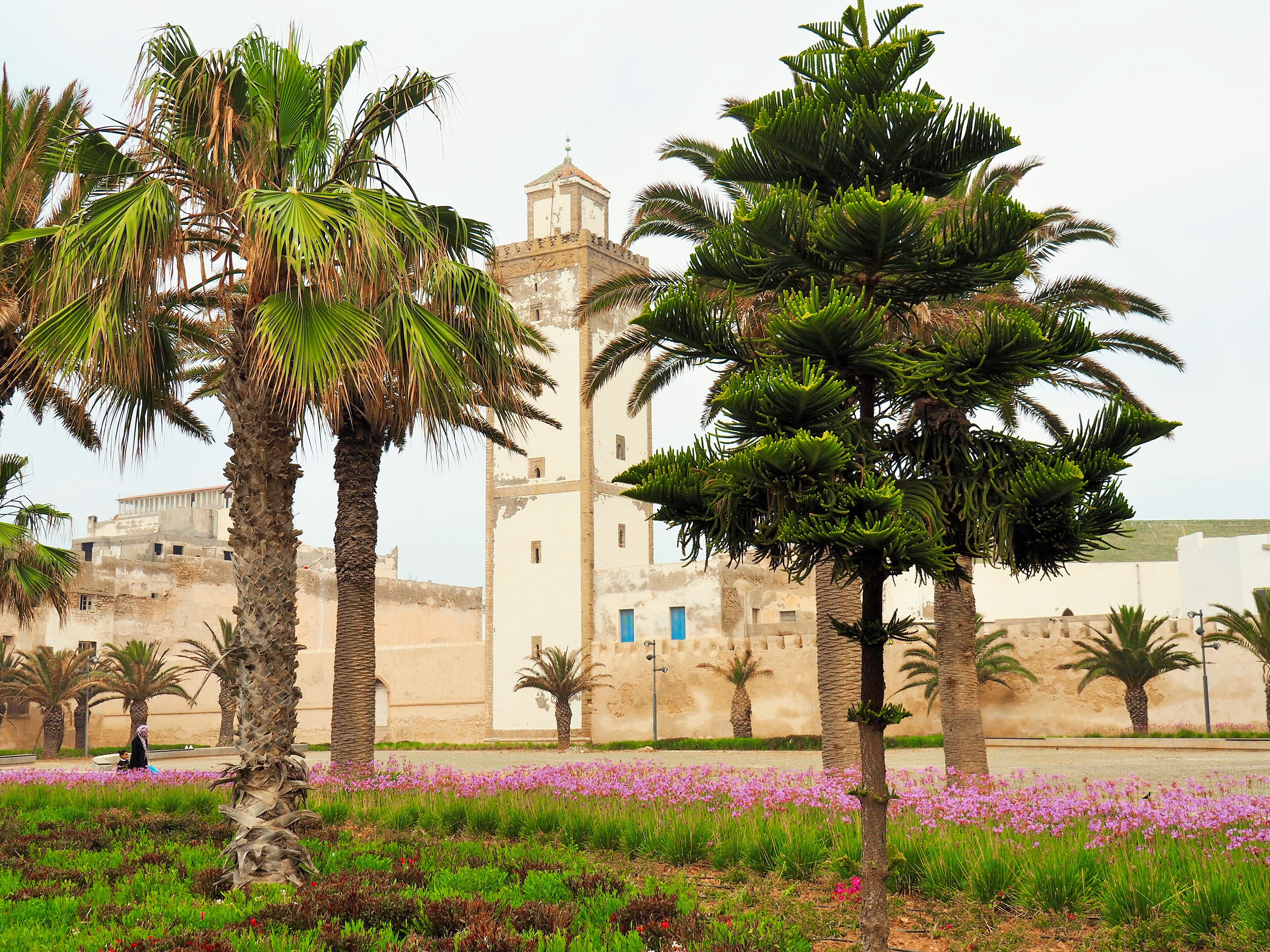 The city of Essaouira was our honest reward for the ride! Here, you have endless options to get lost in the narrow streets of the medina (old city). They will lead you to the port anyways! By the way, do you know that some episodes of the Games of thrones were filmed in this majestic city?

If you wonder what else to do here, here are five tips:

1. Marvel at the fishing port, with its beautiful scenery of small sky-blue boats moored together. 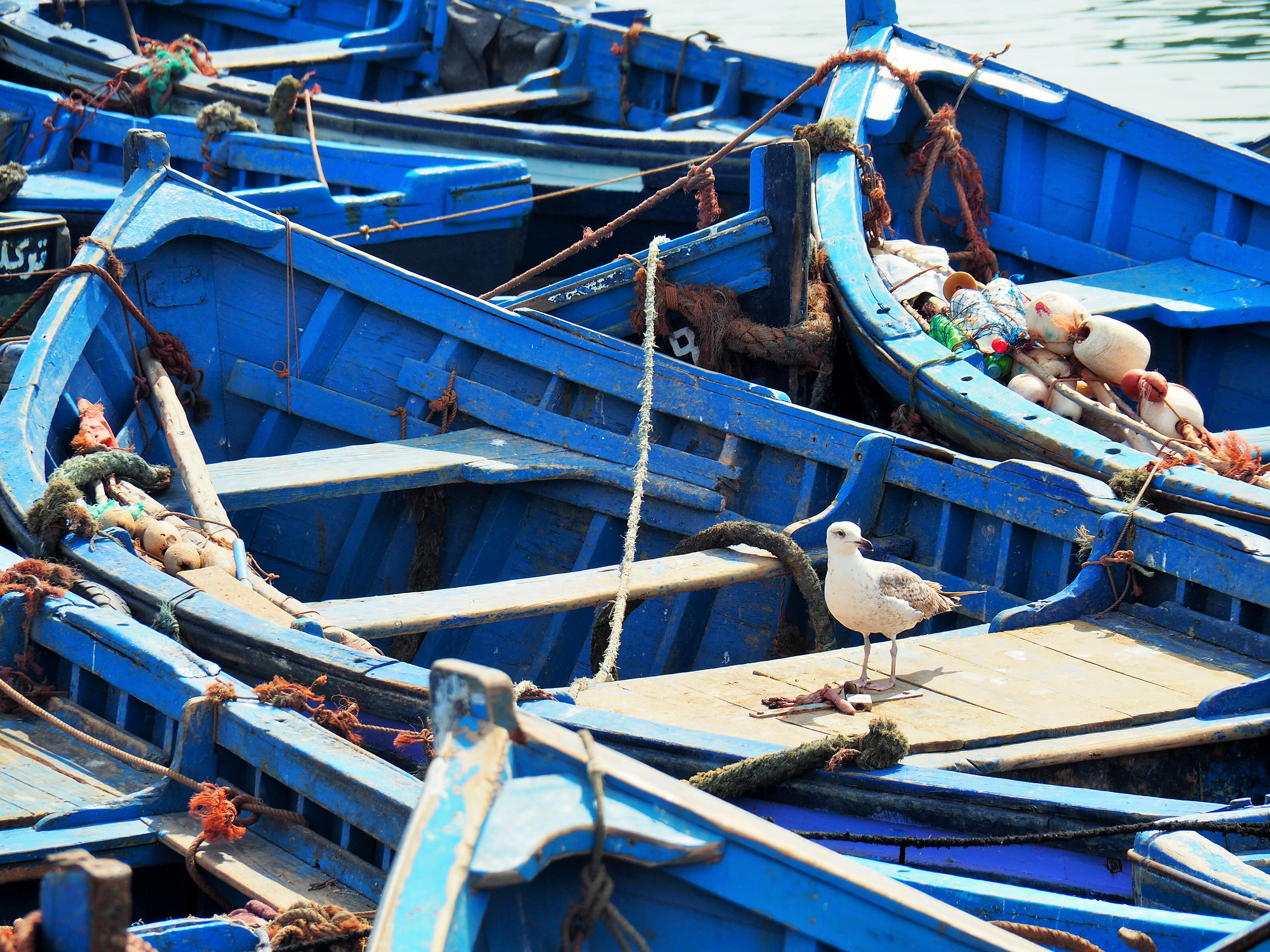 2. Go seeing the ramparts, enjoying a great view to the medina and taking a round-framed photo. 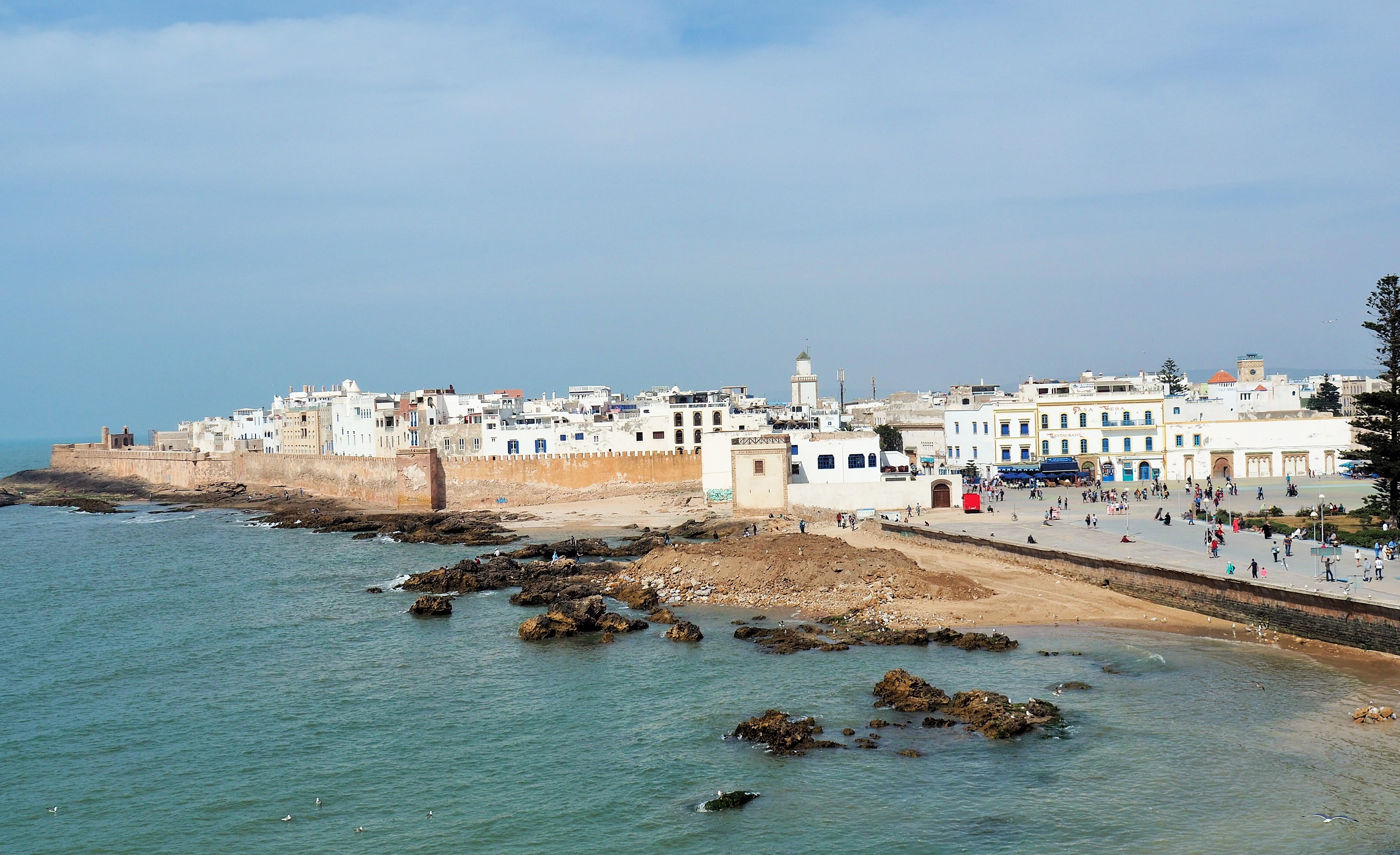 The city of Essaouira

3. Try the freshest day catch fried and sold at the fisherman stands right in front of the port.

4. If you are into cosmetics, you have to visit the argan oil cooperative and buy some argan oil for bargain price.

5. Wander around the traditional souk and its labyrinth-like side streets and get overwhelmed with the surrounding you smells and colors. At the fish market, you can buy any fish or seafood you like and let it be fried at the local restaurants (stands) nearby. 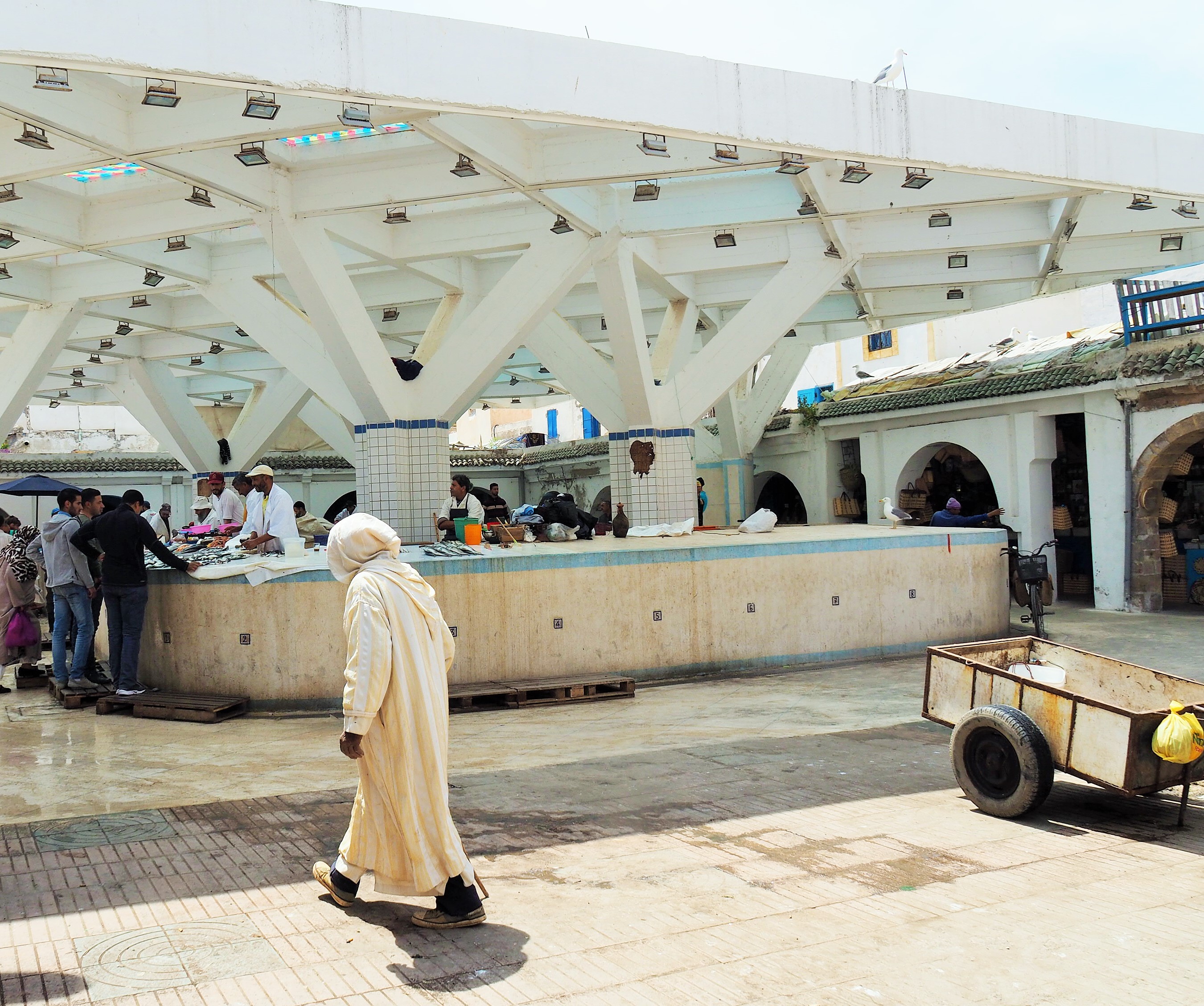 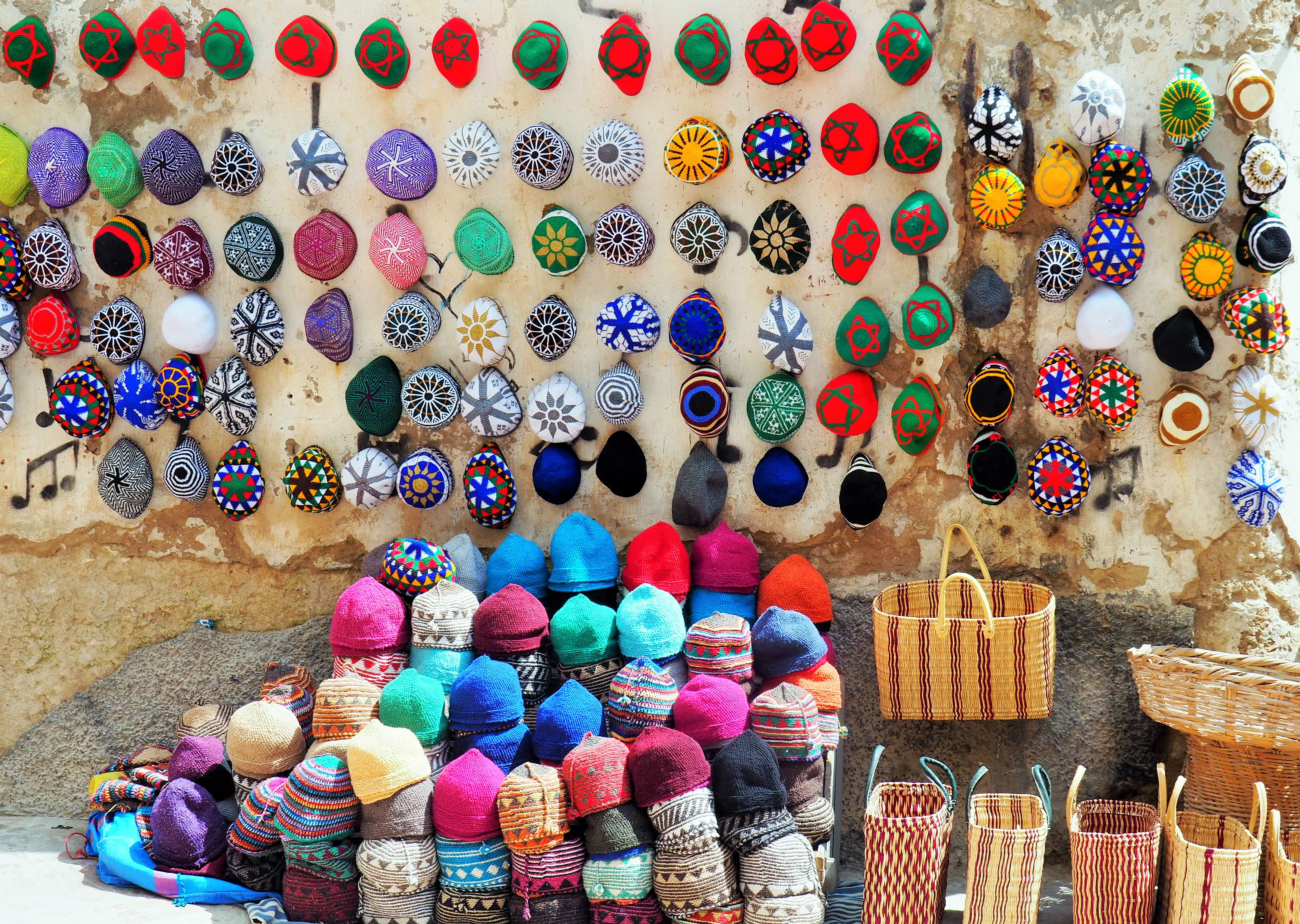 For the dinner we wanted to go to the Laayoune restaurant (Rue El Hajjali, Essaouira, Morocco), but it was closed from until 18. Our stomachs didn’t agree to wait for two hours, so we just turned 180 degrees and went to the Restaurant du Coeur. It is pretty simple and the service is very, hmm, unsophisticated, but the meal was delicious. My deep love to Moroccan couscous started with this restaurant! 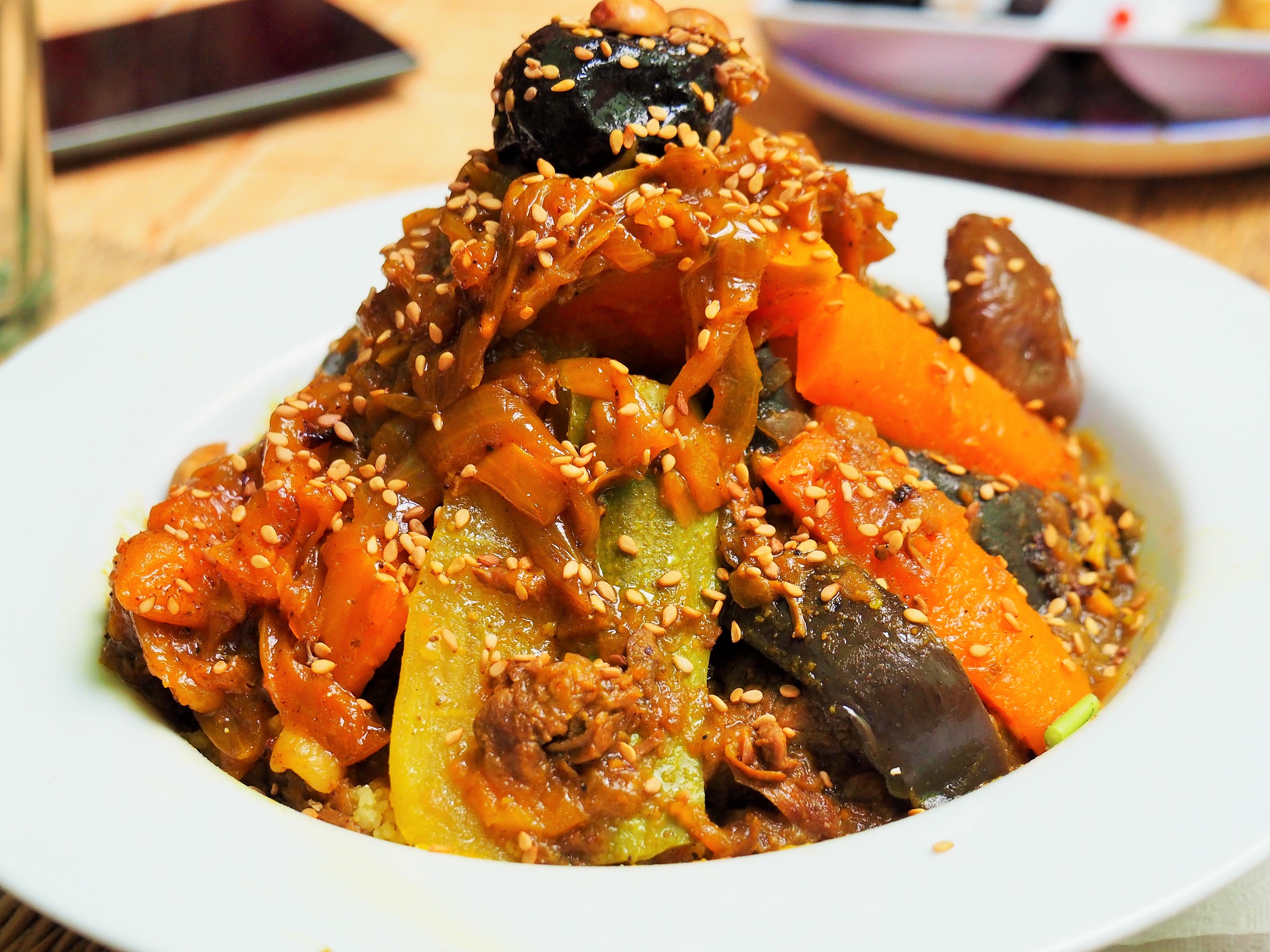 A couscous to savor!

Guess what was the second most popular offer we received on the streets after “have a look at my carpets” or “you want to buy some spices” appeal? It was “come in, I will shave you, my friend” and sometimes a brisk “hashish?” The most unusual request which I accepted was the one to draw-copy my earrings. Hey, indeed, why not! 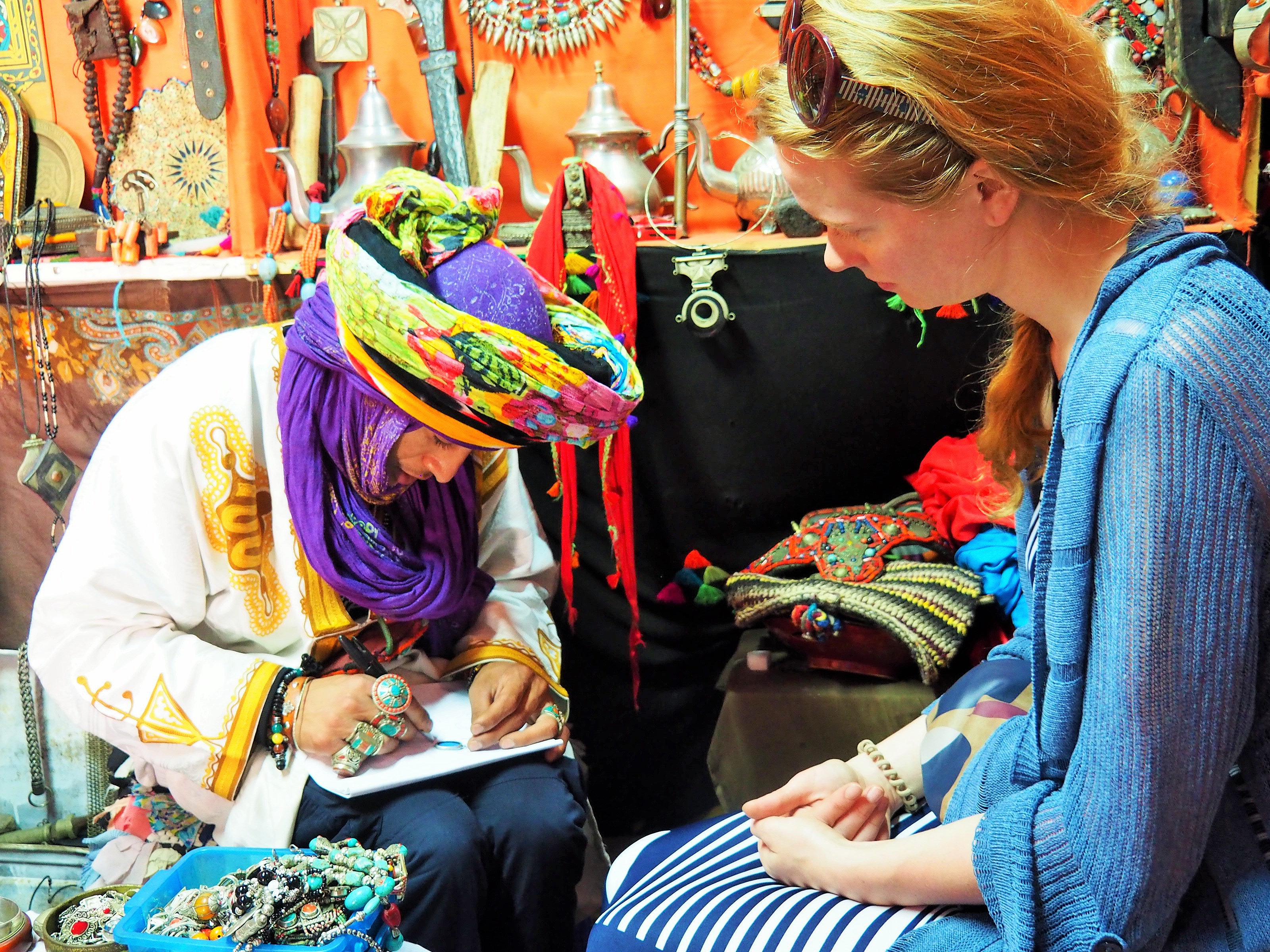 In a jewelry shop

Our tip for an accommodation in Essaouira is the outstanding riad Dar Assalama (darassalama.com) with its big, clean, tastefully decorated rooms, stylish bathrooms with hot shower, two terraces, one rooftop with seagulls hailing and flying around and one for breakfast. The latter was incredible, with egg tajiine and fruit-raisins-nuts warm salad. The staff was extremely friendly. In the evening we didn’t go to any rooftop café: we had fresh mint tea served on our riad’s rooftop for us and could relish the beautiful sunset! 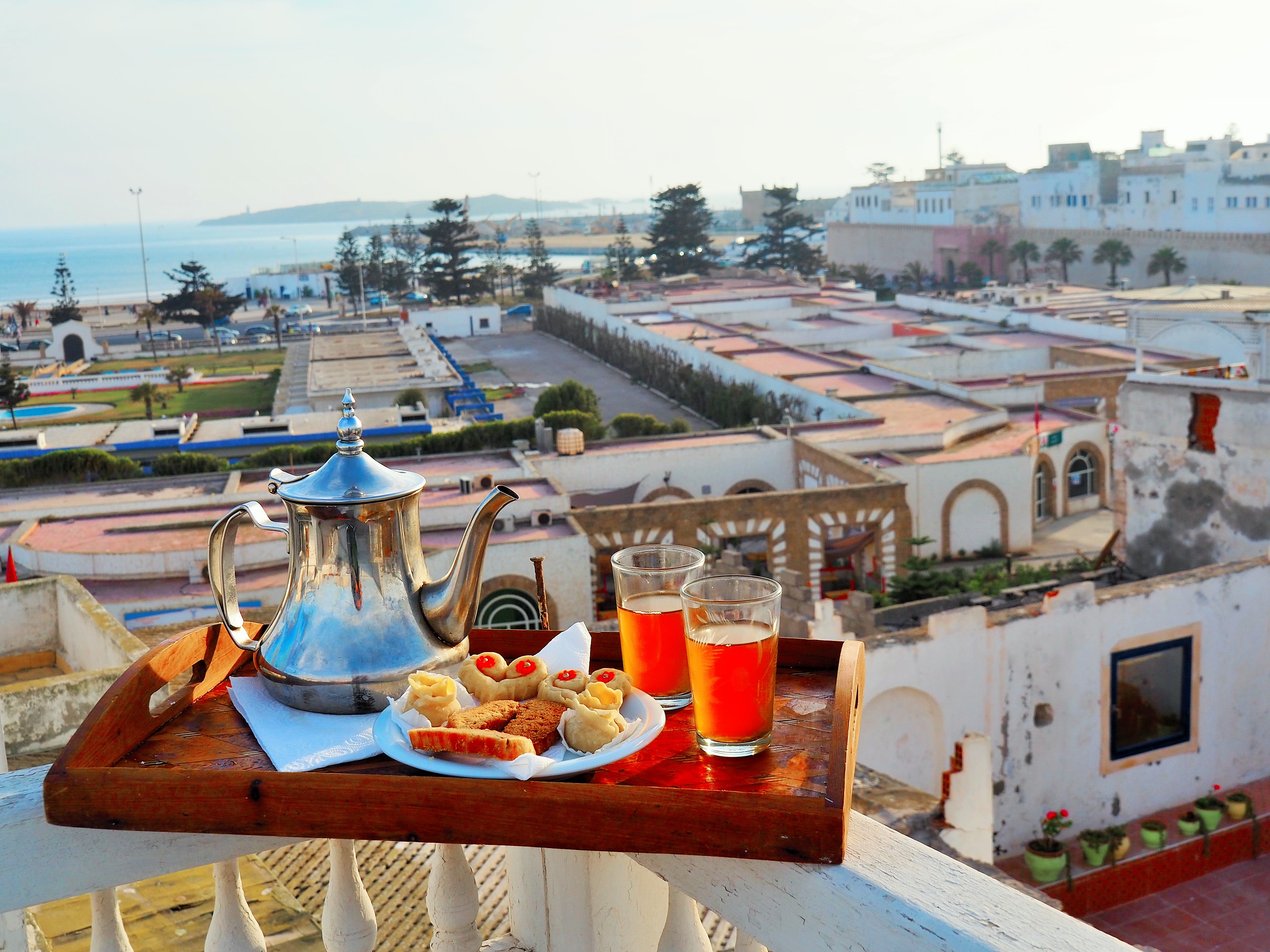